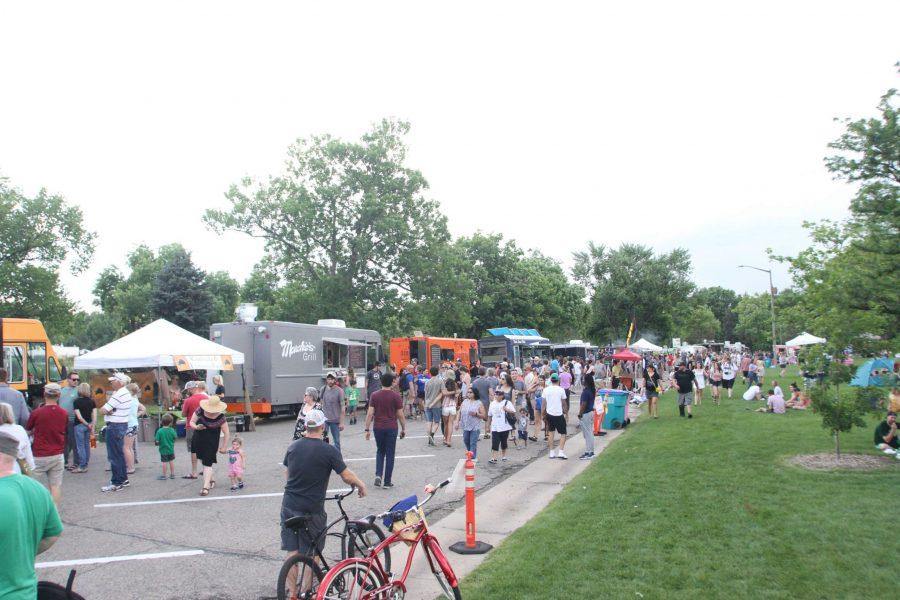 Fort Collins loves its food trucks. They’ll show up outside of breweries to provide edible pairings for and at every event imaginable, offering their unique foods that often can’t be found anywhere else.

At the Fort Collins Food Truck Rally, which is going on every Tuesday during the summer until mid-September, the food trucks become the main attraction. The trucks line up in a long row in City Park on Sheldon Drive, directly through the heart of the park.

From the time they set up and start serving food at around 5:30 p.m. until they close up shop for the night, food, music and community togetherness is served up in a paper basket. The rally itself is free to attend and has a rotating selection of food trucks. Some trucks are present more often than others, but visitors can expect to find a wide variety of food from a dozen different genres on any given week.

“I’ve been doing (the rally) since the beginning,” said Menyus Borocz, the owner of the La Piadina Food Truck, who is also a Colorado State University alumnus with a master’s degree in business. “I think it’s really fun. It’s basically having a picnic where you don’t have to bring food.”

Dozens of families show up and stake their claims with a blanket or foldable chairs. Grass space is especially limited in the shade, which can be tough to deal with should there be a lack of cloud cover during a traditionally hot Colorado summer. Be ready to sit in the grass or eat while standing up.

“The environment that Fort Collins provides for (trucks) with going to breweries and the general atmosphere, it’s really cool. You don’t get to do these things with a brick-and-mortar restaurant.”

Borocz’s truck serves Italian flatbreads known as Piadas and soon has a less mobile location opening at The Exchange in Old Town.

However, not all food trucks are looking to move on to an immobile location. The Tramp About, a truck offering regional American dishes, started off as a smaller cart but moved into a more traditional food truck a couple of years back. One of the owners, Tim Meador, is happy with all the benefits that food trucks supply.

“It’s a lower investment to get started with,” Meador said. “You’re able to start off with a low cost and be very hands on. It allows for a lot of freedom. The environment that Fort Collins provides for (trucks) with going to breweries and the general atmosphere, it’s really cool. You don’t get to do these things with a brick-and-mortar restaurant.”

“There are like 50 food trucks that want to be part of this,” Borocz said. “But we also want to have the trucks that people know. That way we’re all successful. But every time, we bring in two or three new trucks.”

Going with few friends is heartily recommended, especially for the terminally indecisive. The ability to pick more than one meal and eat off of one another’s plates is a boon if lots of options overwhelm the senses.

“It’s great for the consumer,” Meador said. “I love going to these things because I can try several different things, where if I just go to one place then I can just try one thing.”

The rally is good for the food trucks too, giving them a chance to reach out to more parts of the community.

“We go to breweries four days a week,” Meador said. “This (event) allows us to really hit the other market that we’re not hitting: people who don’t frequent the breweries as much as we do. Maybe that’s just not their scene.”

The Fort Collins Food Truck Rally is happening every Tuesday in City Park from 5:30 till dusk. Musicians play live, and the event is family-friendly.