Museum of Discovery celebrates women’s history in ‘Discovery after Dark’ 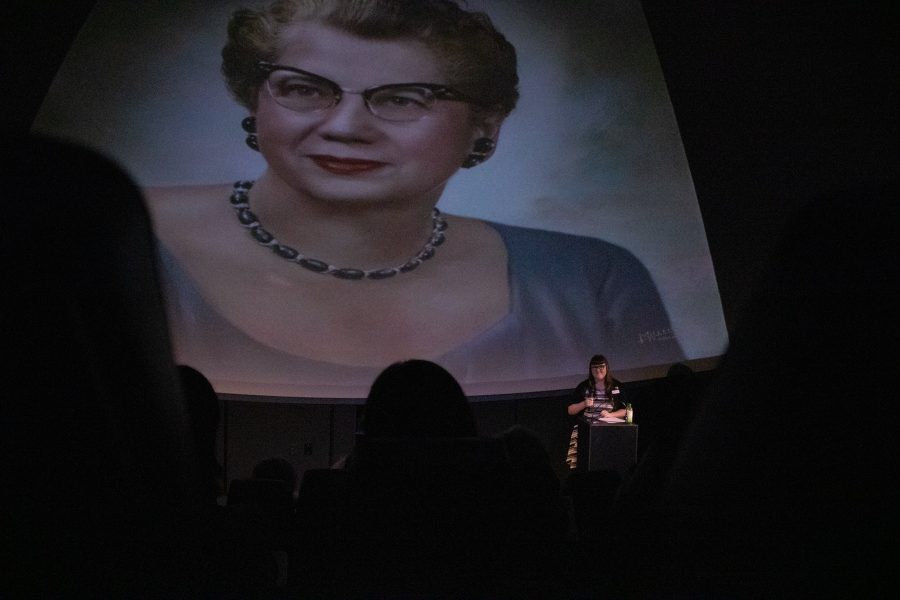 Jessica Gengler discusses the life of Editha Todd Leonard, who is responsible for the creation of the Fort Collins Symphony, at the the Discovery After Dark: Women's History in Fort Collins (Devin Cornelius | Collegian)

It has been 100 years since the United States Senate passed the 19th Amendment, which gave women the right to vote across the nation.

To celebrate, the Fort Collins Museum of Discovery held a lecture on June 20 to highlight some of the great women who shaped Fort Collins history. The lecture was held in an after-hours series called “Discovery After Dark,” which is held in the Otterbox Dome Theatre in the Museum. The state-of-the-art theatre is comprised of a domed screen on which images may be projected in 360 degrees.

In order to bring these historical women’s stories back to life, the staff at the Museum’s archives scoured their vast collection of journals, interviews, and artifacts.

“In creating a program like this, we always encounter something we call archival silences,” said Lesley Struc, the curator of the archive. “These are instances where people or events are not fully represented in the archive. Like many archives, our archives reflect the dominant historical narrative, and that doesn’t always include diversity or voices of women.”

All of the women presented were multi-talented and determined to inspire change in their communities. They included journalists, historians, community builders, nurses, musicians and actors.

For example, Agnes Wright Spring (1894 – 1988), who lived in Colorado and Wyoming, served as the official State Historian for both states and is the only person ever who has done so. Spring’s accomplishments only continued from there.

“She was the state librarian for Wyoming, the State Historian of Wyoming,” said Jenny Hannifin, an archive assistant at the museum. “She was also the superintendent of weights and measures and became quite an accomplished golfer, winning a few tournaments in Wyoming and then in Fort Collins.”

For all of the women who were presented, this was a common theme. All of them were multi-talented and deeply ingrained in their communities, bringing great change to them.

A hundred years may sound like a long time, but in the grand scheme of things, this is only a few generations removed from today. One of the women died as recently as last year, and many of them sat down for interviews with the museum to tell their stories.

“So we know when we’re going to do this event next year,” Struc said.

Notably, Colorado has guaranteed women the right to vote since 1893, 27 years earlier than the Amendment’s ratification.

Like many archives, our archives reflect the dominant historical narrative, and that doesn’t always include diversity or voices of women.” -Lesley Struc, Curator of the Archive

Many of the tools used to research the stories of these women are available online through the Fort Collins History Connection. These include newspaper clippings, transcripts of oral histories and all sorts of other objects that can provide insight into the lives of those who came before us.

Struc is excited about the possibility that this event broadens the reach of the Museum of Discovery and gives them access to new information through the kind donations of attendees.

“Events like this are always exciting because it gets the word out about things we might be missing: things we need to collect, stories we need to gather,” Struc said.

The presentation was held in the OtterBox Dome Theater, which houses a domed screen on the ceiling where images may be projected in 360 degrees.

It felt a bit odd to twist one’s head around to read a page from a diary or see a photo of an old building. The Dome didn’t exactly feel like it was built for historical presentations such as this, but it provided an interesting venue. It didn’t detract from the experience but didn’t add much either.