The Rocky Mountain Collegian • May 1, 2019 • https://collegian.com/articles/aande/2019/05/csu-speaks-bring-science-to-the-public-eye-category-ac/ 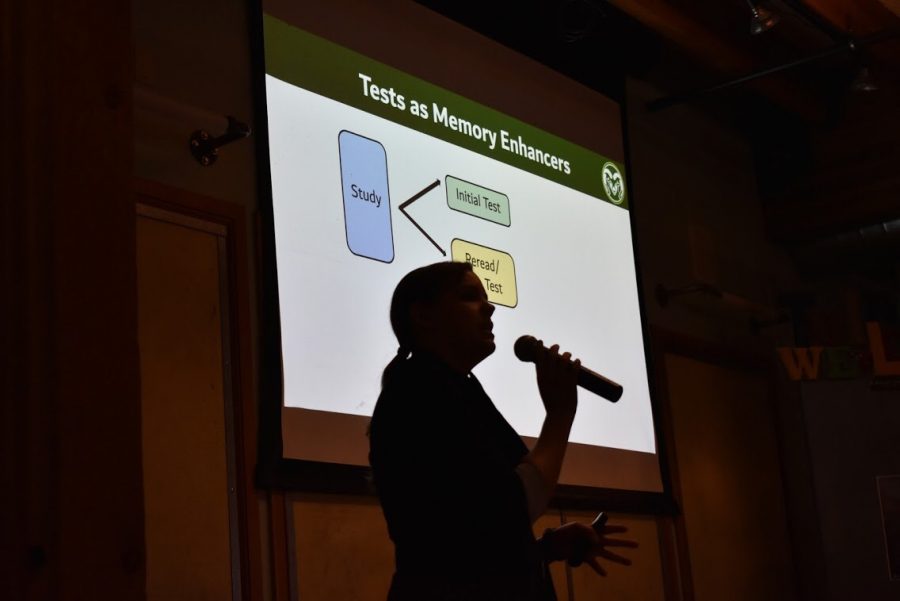 Sarah J. Meyers, a PHD in psych presents her research on how tests enhance memory on Saturday at CSU Speaks (Gaby Arregoces | Collegian)

Brews and research was the idea behind CSU Speaks, an event by Science in Action that allowed Colorado State University graduate students, Ph.D. candidates and faculty to explain the research they are doing in bite-size, jargon free speeches at New Belgium.

While events in the past gave a platform for these types of presentations and speeches, this is the first ever CSU Speaks. It is specific to science-based research and presentations intended to be explained to the public. The call for submissions for speakers was purposefully asked to be jargon free so that people removed from the world of science could still attend the event and understand its content.

This event has been in the works for a year with a team of planners, organizers and executors.

“We have a really good team, so I think that people have just taken on their own duties and organized different parts of it,” said Charlotte Cialek, a Science in Action member.

According to RamLink, Science in Action is a CSU group with the purpose of learning and practicing effective communication of scientific research to the public and how policy and science interlace.

“It’s been awesome because so many people that are on this team that organized this are really dedicated to science communication and outreach,” said Amanda Koch, president of Science in Action.

The planning has been extensive, with many meetings detailing with what the event should look like.

“One of our goals is (to) mainly just reach the community, and when you have a group of people that really care about it, it’s not hard to motivate people to do something to help this run smoothly,” Koch said. “I honestly don’t think it’s been challenging at all. We had more abstract submissions than I thought we would. We’ve had a whole bunch of people coming in and out of this room, people are drinking beer, they’re happy.”

The entirety of CSU was invited to submit an abstract that could be understandable to the public. There were 20 spots open for speakers and about 100 abstracts were submitted for the opportunity to talk. The event itself lasted from noon to 6 p.m.

With public accessibility, children had the opportunity to engage with science demonstrations happening out on the patio while the talks were going on inside.

Having an event like this at New Belgium felt like a no-brainer for Science in Action when looking at the outreach they wanted this event to accomplish.

“New Belgium is like the hub for the Fort Collins community, we feel like, so you have the beer, you have an influx of people of all types, of walks of lives from Fort Collins,” Koch said. “We wanted to find a place that would embody the environment of Fort Collins and such that we could reach a wide variety of people as well.”

All in all, the event tried to connect science researchers with the public to bring more light to their research and maybe instill policy changes. Larimer County Commissioner and former State Sen. John Kefalas stopped by for a bit to engage in discussion with some presenters about their research and how policy can adapt with it.

“The goal is to engage community with what we do at CSU,” Cialek said.