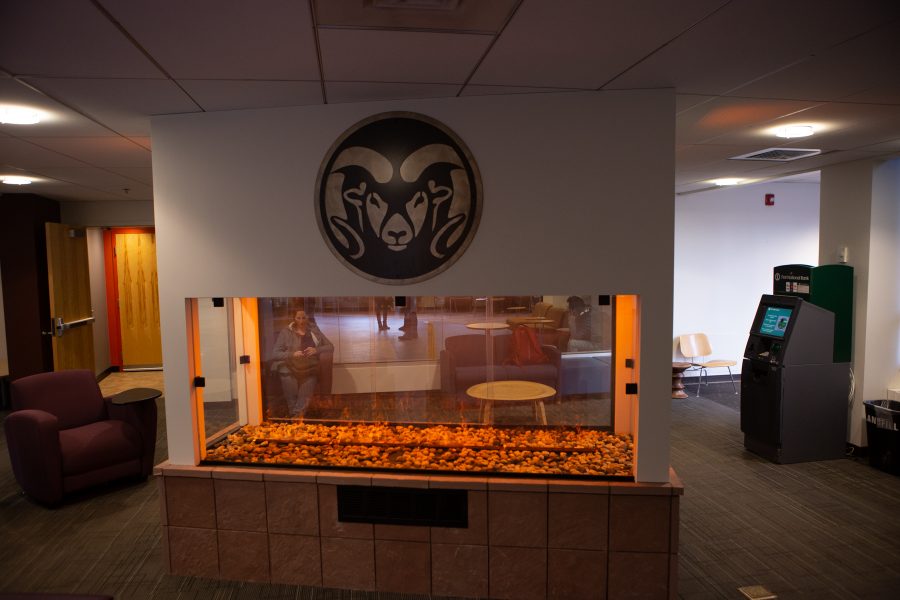 The new fireplace in the Morgan Library helps to give the entrance an atmosphere of calm that facilitates students gathering around it to study or just hang out. (Josh Schroeder | Collegian)

When entering the Morgan Library there used to be a barren sitting area in-between Morgan’s Grind and the entrances into the building’s courtyard, but not anymore. Those who frequent the study mecca were surprised to find the aforementioned space occupied by the new addition of a stand-alone fireplace that appeared with no explanation following December’s long break.

The fireplace was designed by senior Interior Architecture and Design major, Camila Tomasel who was working for Remodel & Construction Services Section.

According to the Director of Strategic Relationships and Administrative Services for the library, David Ramsay, the fireplace is the brainchild of the library’s dean, Dr. Patrick J. Burns, Ph.D. Burns’ intention behind the project, Ramsay said, is to create a location within the library that cultivates a larger sense of community and brings students together. He specifically requested that a fireplace be implemented into the library’s design alongside other renovations to the space that occurred while students celebrated the winter holidays.

“We do a lot of work during breaks,” Ramsay said. “We put in those walls by the gates, and we try to do all of that when nobody is around, kind of like Disney World. We do it while all you guys are asleep. As soon as we put the fireplace in, people have been huddling around it, and it’s working. Even when we first had the fireplace out there, there was some caution tape around it as they were working on stuff, and people were pulling up chairs. They’d be testing it out and people would be looking at it.”

Loan and Reserve Desk employee and junior physics major Lara O’Connor said that if building community was the goal of the project, the professional staff accomplished it. In contrast with how students use to utilize the space, she said she has seen more and more students being drawn to it.

“It’s before noon and there’s already so many people sitting around it,” said O’Connor. “No one used to sit over there. Maybe some people would make phone calls right by the courtyard, but no one would usually sit over there. The only thing people would do is sometimes they would come in and play on the round seats after exams. So if community was the goal, I think they did it.”

According to Ramsay, the construction on the fireplace throughout the semester intended to creatively comply with economic and environmental preferences. The nearest gas line to the library is located within the Lory Student Center, so the fireplace contains no actual fire, but is simulated through water vapor ignited by orange and yellow LED lights. Ramsay said this design requires minimal energy and minimal water usage, and the construction of the piece is intended to blend in with the rest of the library’s landscape. The ram head displayed atop the fireplace is the first ram head to be present within the library.

Biology student Hana Gebru said she was drawn to the fireplace due to its interesting design and sees how it would consequently draw students together.

“It’s kind of a very nice environment to just be around,” Gebru said. “It’s relaxing and soothing, as opposed to upstairs where I feel a lot more tense. Of course, upstairs is a great studious environment, but this place is relaxing, and it’s nice to study while being relaxed. I came [to the fireplace] before to see if the flames were real or not. I did not sit down, but if I hadn’t checked out the source of the flames I feel like now, which is my first time sitting here, I would have asked someone and we could have sparked a conversation.”

Editor’s note: Additional information as to who designed the fireplace was added after the article’s initial publication.