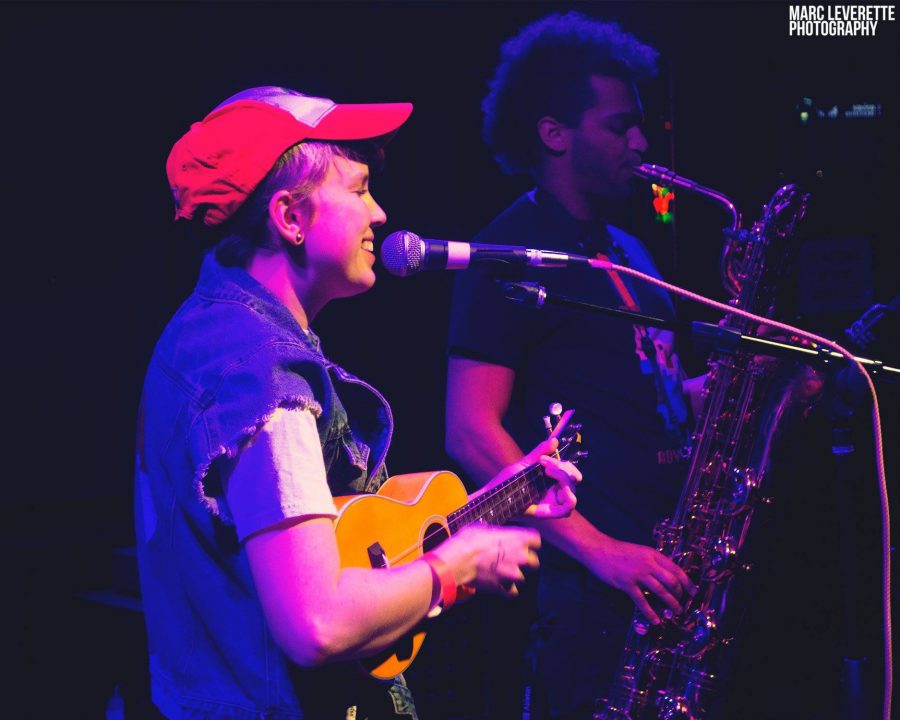 The band is the brainchild of Greeley couple Brian and Mary Claxton alongside their friend and musical collaborator Hayden Farr. The Claxtons and Farr met through their mutual involvement with a soul funk band, The Burroughs, where they soon found they had more in common than their musical style: Saturday morning cartoons.

“I think it was our first time watching Steven Universe, and we wrote a song about it,” Farr said.

Inspired by their shared interest in pop culture, the trio split off from The Burroughs to write more animated music.

“I feel like both of us express that writing lyrics is difficult; you really get in your own head,” Mary Claxton said. “I found that writing about characters can be a really pure expression of simple emotions and stories, which I feel is what ultimately connects with people.”

“We’d really like to play for our people, which is nerds.” -Mary Claxton, Trash Cat vocalist

Trash Cat’s songs focus on stories that their generation can relate to, from popular cartoons like Steven Universe and Adventure Time to books like Harry Potter and well-known shows like Star Trek.

The band’s self-proclaimed “Cartoon Rock” adds a new beat to Fort Collins’ music scene. The band is determined to find their own niche.

“We’d really like to play for our people, which is nerds,” Mary Claxton said. “We’d like to do a Comic-Con tour. I think, for us, it’s about setting the stage appropriately. I can foresee us bucking the traditional touring model and playing in weird spaces and having youth engagement as a part of what we’re doing.”

The band acknowledges their unconventional approach and hopes listeners do not misunderstand their intent.

“I think because what we’re doing is a little off the beaten path, we were wondering how people were going to react to, like, a song that’s really beautiful but is about Dumbledore,” Mary Claxton said. “I want it to feel authentic. I don’t want the band to seem like a joke, but a lot of the subject matter is funny and lighthearted and nostalgic.”

Not all the band’s work is fiction, though. The track “Full-Time Lover” is based on real-life icon David Bowie. In the song, the band pays homage to one of the inspirations for their unique futurepop style.

“Their sound is unusual in the sense that they are made up of electric uke, baritone sax, drums and Mary’s powerful vocals,” said Jess Reed, Music District programs and events manager. “I’ve never seen a band playing with that configuration. Beyond their unique lineup, they are delightfully geeky and innovative in their songwriting and style. Trash Cat is weird, cool and unexpected. And their music is infectious.”

Trash Cat will be performing songs from their debut album live March 28 at Chipper’s Lanes in Greeley and March 29 at Pinball Jones Campus West. To see more, visit the band’s Facebook.

Lauryn Bolz can be reached at entertainment@collegian.com or on Twitter @LaurynBolz.