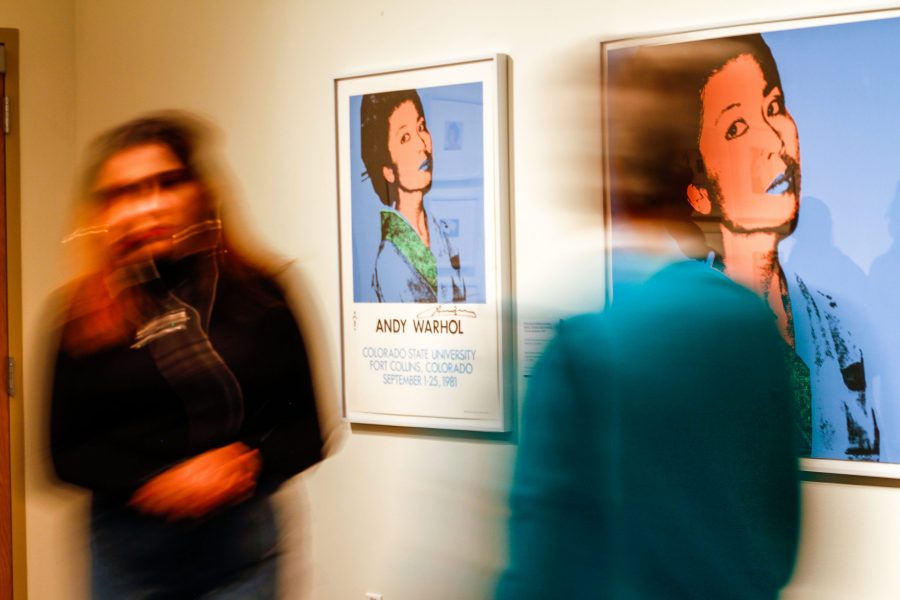 Visitors walk through the one day only Andy Warhol exhibition at the Gregory Allicar Museum of Art Nov. 10. The exhibit featured Warhol pieces from the museums archives as well as Warhol themed photo booths and crafts and a documentary about Warhols time as a visiting artist at CSU in the 1980s. (Ashley Potts | Collegian)

People buzzed in and out of the low-lit, cozy room of the Gregory Allicar Museum of Art to see ‘Sabado Warhol,’ a one-day exhibit showcasing some of Andy Warhol’s unseen work Saturday.

The exhibition featured 18 works by the artist that included six prints, six Polaroids and six gelatin silver photos. Tours of the gallery along with descriptions of the work were available in both English and Spanish. Next to the art pieces, people took polaroid selfies with props, played with images projected onto the walls and looked through large books depicting Warhol’s life and legacy.  Lucky museum-goers would win 1981 catalogs of Warhol prints and one rare print from the raffle happening throughout the event.

When it came time to preview part of CSU filmmaker Frank Boring’s upcoming documentary on the 150th anniversary of CSU, people rushed to find seating. Some had to stand to view three clips all relating to Warhol’s visit to CSU in 1981. Warhol’s visit was made possible by collectors John and Kimiko Powers, who helped organize an exhibition of his work. The visit included a commission of the large soup can sculpture that can be seen in front of the University Center for the Arts building.

Boring stood in the corner while the audience watched, beaming. When each clip ended, applause rang out across the entire galley. The first was footage from the original 1981 visit to the CSU campus that Warhol made, the second an interview with former CSU president Ralph Kristofferson, explaining why they had Warhol and other pop artists visit the campus and the third an actual round-table discussion with the artist.

The Gregory Allicar Museum has extensive holdings of Warhol’s art, thanks to donations from the Powers, Polly and Mark Addison in Boulder, and the Andy Warhol Foundation for the Visual Arts.

Walker Discoe can be reached at entertainment@collegian.com and on Twitter @wdiscoe.