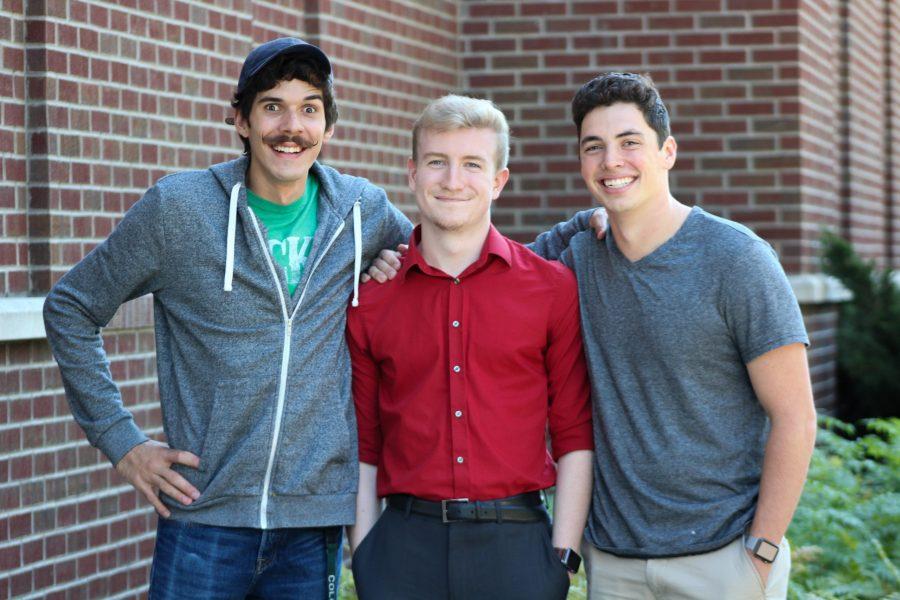 CSU students Dan Isaacs, Bradley Callahan, and Jake Cuddemi talk about their podcast, Quick Sidebar. Cuddemi said, "We like to talk about things that interest us and that hopefully those that have similar interests as us would listen to it." Their episodes range anywhere from Spiderman to zombies, to sci-fi to pet peeves. (Clara Scholtz | Collegian)

If music isn’t giving people the boost they need at this dreadful time of the semester, a funny podcast may be something to look into.

“Quick Sidebar” is a student-produced podcast by CSU theatre performance seniors Jake Cuddemi, Bradley Calahan and Dan Isaacs. The podcast features the three friends as they navigate any subjects they can fit into a 30-minute window.

Maintaining a playful and funny tone, the three banter over whimsical subjects like the zombie apocalypse, pet peeves and Marvel superheroes. Motivated by their final year at CSU, the three created the podcast upon returning to school after summer.

“I had just gotten back from an internship in L.A. and I was hanging out with Bradley, telling him things I learned and things I wanted to do now that we were back and ready to start senior year,” said Cuddemi. “We decided ‘let’s just do it.’ We ended up recording two episodes that night.”

The show’s notable catchphrase,  “Welcome to ‘Quick Sidebar,’ where we talk about anything and everything and get distracted often,” is anything but misleading.  Originally an inside joke between the three, “Quick Sidebar” was thought of by Calahan as an appropriate title of the show, reflecting their tendency to jump from topic to topic rather sporadically.
We start with one overarching topic…We try to keep it general, and then within that, we end up getting distracted with what we now call “quick sidebar.” Part of what makes our podcast funny, I think, is that it comes naturally and it’s happening in the moment.”  Dan Isaacs, co-host of ‘Quick Sidebar’
The students find new ways to keep their content fresh and exciting such as bringing in a fun soundboard, featuring podcast guests on Fridays and playing games. In their episode titled “Lightning Round,” they debate over several different things – cats vs dogs, cake vs pie, Coke vs Pepsi – each within a three minute time period, perfectly showcasing the nature of the show.

Calahan, Isaacs and Cuddemi became good friends through participating in CSU’s production of  “Urinetown” last spring. The discovery of their different opinions created an interesting and entertaining dynamic. Through bonding, it was revealed that Cuddemi is the “optimistic one,” Isaacs is the “pessimistic one” and Calahan lies in the middle, balancing and melding the group well.

“Honestly I think our major bond came from last spring,” Isaacs said. “All three of us were together for twenty-plus hours a week for four months. It forces you to really get to know people. We just happened to gel really well together; three personalities that are all different, yet similar enough that you can kinda click and make it work.”

The improvised, spontaneous tone of “Quick Sidebar” lends itself to much more amusing conversations. Though they usually have basic notes and ideas for what to talk about, the three prefer to keep it unscripted.

“We start with one overarching topic,” Issacs said. “We try to keep it general, and then within that, we end up getting distracted with what we now call ‘quick sidebar.’ Part of what makes our podcast funny, I think, is that it comes naturally and it’s happening in the moment. Sometimes we have an idea of what we’re gonna talk about, but it ends up not being anywhere near what we anticipated.”

Podcasting is Cuddemi, Calahan and Isaac’s current medium of choice, however, they plan on expanding towards other forms of entertainment as well.

“Our goal has been to do all other sorts of creative activities,” Cuddemi said. “We’re writing sketches that we’re hoping to start filming under the “Quick Sidebar” name. We figured the podcast would be the first way for us to start doing something creative so that it will hopefully get the ball rolling. When we first published our first short episodes, we did like a ‘dump’ of podcasts.”

While the three hope to eventually turn their podcast into a business, right now they see it as a fun hobby. Calahan said producing their own content is particularly liberating because it gives them the opportunity to be as creative and individual as they want.
‘Quick Sidebar Podcast’ can be found on Youtube, Soundcloud and iTunes. They can also be found on Instagram and Twitter via @Quick_Sidebar.
“I want to get into the world of entertainment, and this is a good way to start that, I think,” Calahan said. “Plus it’s not even the world of entertainment, it’s the world of entertainment with so much freedom. You’re basically controlling your brand, and you aren’t going some place like if you were an actor being told exactly what to do. I would like to see it go forward, but I don’t necessarily have any expectations on it because right now it’s just fun.”

Calahan, Cuddemi and Isaacs have big plans for “Quick Sidebar” in the future, hoping to bring on more guests and visual aspects to the show, and of course, more listeners. Aside from honing in on creative skills and having fun whilst doing it, the students’ main goal is to entertain and bring joy to as many people as possible.

“We’re not trying to comment on society, we’re just trying to give people an escape from society,” Isaacs said. “To entertain them for a half hour as they drive or walk to class or do homework…or whatever.”