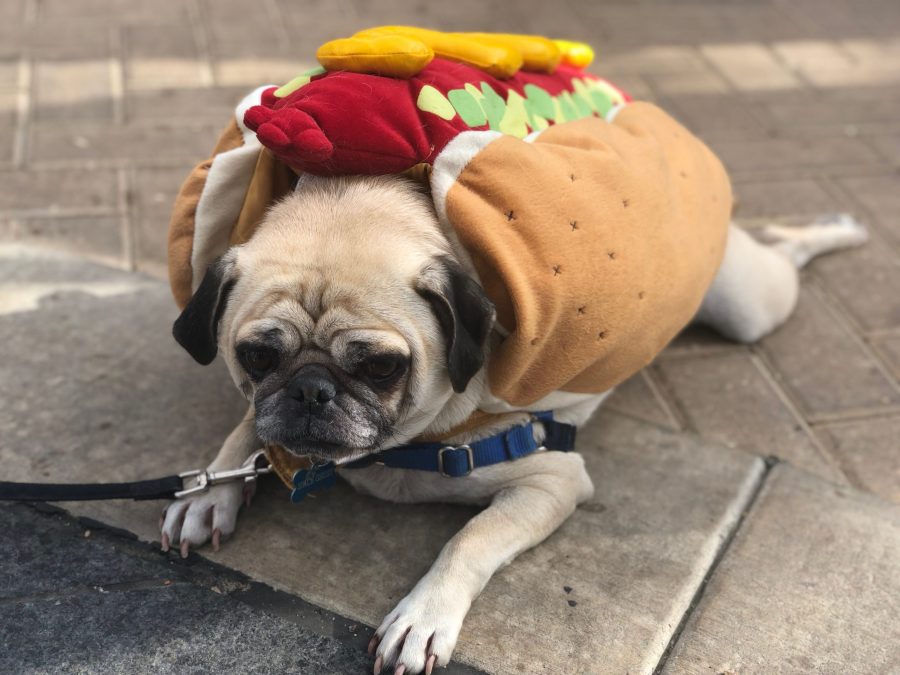 Amongst the snorts and the pitter patter of small paws on Old Town’s pavement, this year’s annual Halloween Pug Parade brought with it an aura of sentiment. Pugs and pug enthusiasts gathered at Oak Street Plaza on Sunday afternoon before their parade march through Old Town.

The event was hosted by the Fort Collins Pug Play Group, a group of pug and pug-mix owners who meet the first and third Sundays of the month at Fossil Creek Dog Park. For most years, the parade is a time for the pug community to celebrate and socialize their fur-children while wearing matching Halloween costumes. Before this year’s parade started, event organizers Kim and Jeff Buraglio thanked everyone for attending and shared some news with that brought many attendees to tears and shifted the meaning of this year’s celebration. The couple announced their pug, Yoshi, had died last week.

“Today is very bittersweet for us,” said Jeff Buraglio. “It’s a hard day, I won’t lie. So we are leading this parade today in Yoshi’s honor, which I think is a bit ironic because he hated dressing up in costumes for photos or anything like that, but a tribute nonetheless.”

With tails wagging in honor of a lost friend, the parade of pugs and non-pug siblings descended onto Old Town. The dogs and their owners were encouraged to dress up in the “spookiest, silliest, cutest” costumes they could find, according to the Facebook event page. This resulted in many sausage-bodied pugs decorated with fanciful garb that left unaware pedestrians and restaurant-goers taken-aback and pleasantly surprised. Pugs came in every shape, age, mix and size and were dressed up as spiders, Starbucks lattes, dragons from Game of Thrones and everything in between. .

Fort Collins resident Ashley Meindertsma brought her 5-year-old pug child, Rocco, to participate in the parade. Rocco was dressed as a dog pickle and is a long time attendee of the Pug Play Group who loves snacking on bell peppers and getting attention.

No tickets or registration was necessary for the free event, but the Pug Play Group posted a Facebook Fundraiser to cover the cost of the special event permit and insurance policy. All extra funds were donated to Colorado Pug Rescue.

“He had a really fun time,” Meindertsma said. “There were people lined up on the streets, and he stopped to see every single one of them. We were last in line at the parade because he needed to stop and see everyone. He was so happy.”

The fleet of pleased pugs began their journey from Oak Street Plaza to Laporte Ave, across College Ave. to Mountain Ave. and ended in Old Town Square. Dancers from Impulse Dance and Fitness LLC, who had just wrapped up a promotional Thriller flash-mob in the square, found themselves surrounded with the fuzzy spectacle, and the pugs ended their long walk by meekly exploring Old Town’s fountains and receiving belly rubs from enthused spectators.

My heart goes out to them, and we made this in honor of Yoshi, and today the parade for us was in honor of him and the love that he brought to all of us.” -Sheree Vowden, Pug Play Group member  on Yoshi’s passing and legacy

Plug Play Group member Sheree Vowden carried her pugs Sebastian and Sadie, who have been happily married for three years, in a stroller throughout the route. Attached to the front of the stroller read an emotional ode to Yoshi.

“Sebastian and Sadie are numbers eight and nine for me, so I know what it is like to lose a pug,” Vowden said. “Today, I just started crying, because you feel like we are just this family and you feel like you have lost a child. My heart goes out to them, and we made this in honor of Yoshi, and today the parade for us was in honor of him and the love that he brought to all of us.”

On Nov. 4, the Fort Collins Pug Play Group will be holding a memorial for Yoshi during a Pug Play meet up at 2 pm. Cookies and ice cream for pugs will be provided during the celebration to honor Yoshi’s memories.

Miranda Moses can be reached at entertainment@collegian.com and on Twitter @mirandasrad.