Hoodie Allen puts on intimate and interactive show at the Aggie 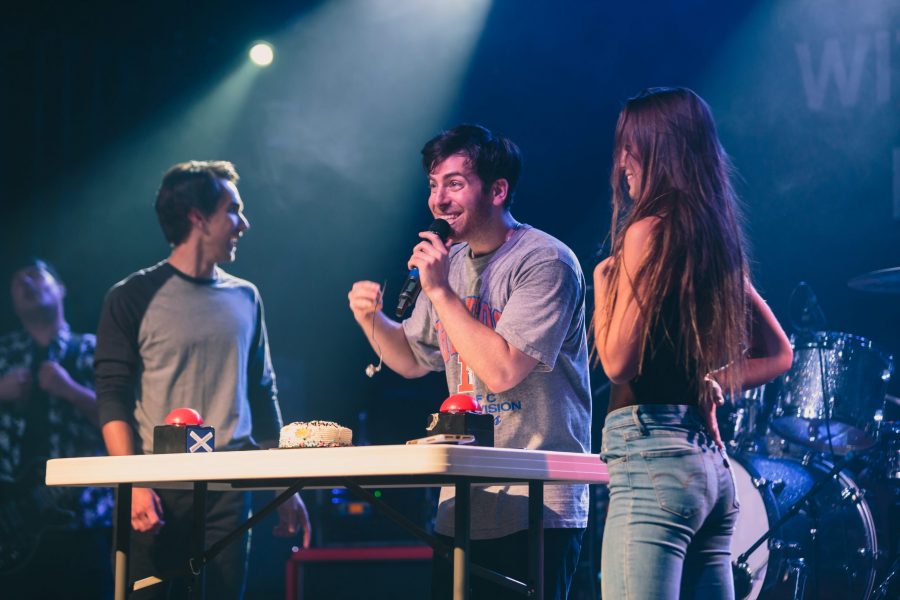 Two audience members prepare to play a Hoodie Allen themed variant of Family Feud with questions based on Hoodie's career during his performance at the Aggie Theater on Friday. (Davis Bonner | Collegian)

Hoodie Allen’s performance at the Aggie Theater Friday night marked his second stop in Colorado after Denver on his “Hanging with Hoodie” tour.

Announced in 2014, the “Hanging with Hoodie” tour strays from typical tours with an emphasis on small, intimate venues and ticket sales limited to only 500 per show. All 500 tickets for each show on the tour also includes a free meet-and-greet with Allen before the performance.

As part of his tour, Allen invited the crowd to participate during the show by inviting a few lucky audience members on stage to participate in one of two themed game shows.

“[This tour] was going to be a more intimate thing so I’m always trying to look for ways to make it more fun and different than anything anyone’s seen before,” Allen said in a post-show interview with The Collegian. “That’s kinda where the trivia thing came in and doing the spinning wheel, just ways to get the crowd involved when they can all really be a unit together, and I feel that happened tonight.”

Throughout the show, Allen paid tribute to his super fans by playing a wide range of songs spanning from the beginning of his career to music that hadn’t been released yet. While there were some crowd favorites like “No Interruption,” the setlist was largely oriented around songs from earlier in his career to pay tribute to his fans who have been listening since the beginning.

“For me, I feel like its only right to play as much as possible for everyone in the building,” Allen said. “With the concept of this tour being a super-fan tour and everyone gets to meet me and stuff, I thought it was just an appropriate time to kinda pay homage and stuff to those songs because maybe on the next tour those aren’t as easy to play.”

Davis Bonner can be reached at entertainment@collegian.com and on Twitter @backhaul_photo.