Panic! At the Disco ignites Denver with an electric performance during ‘Pray for the Wicked’ tour 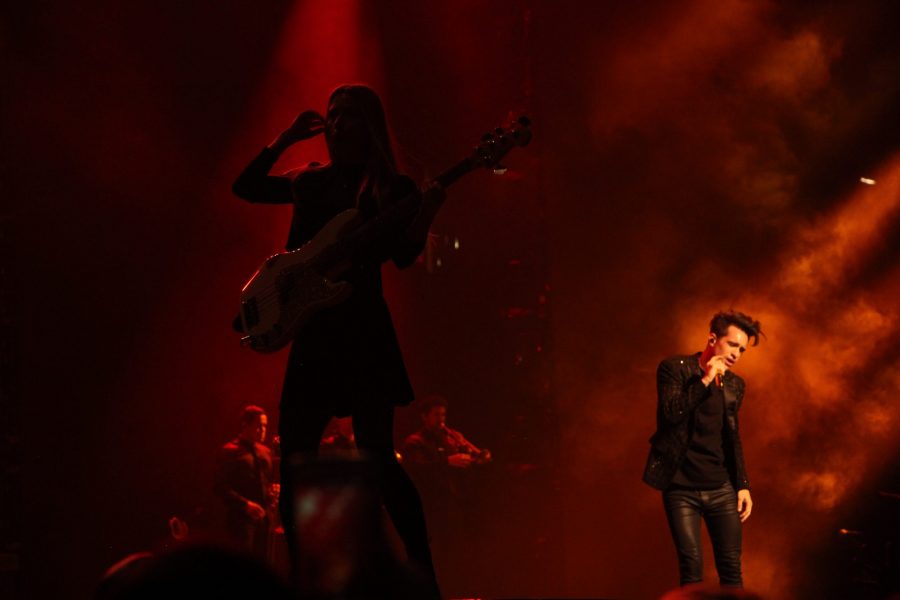 Nicole Row is the bassist of Panic! at the Disco and performed alongside Brendon Urie. (Sarah Ehrlich | Collegian)

Even though it’s been a while since we listened to “Nine in the Afternoon” on our iPod shuffles, Panic! At the Disco is still going strong with their new hit album, “Pray for the Wicked.”

In middle school, it was hard to resist the catchy and passionate songs that came from Panic! At the Disco’s album “A Fever You Can’t Sweat Out” or the album “Pretty. Odd.” All those middle school fans, as well as the new generation fans, gathered at a sold-out Pepsi Center in Denver on Aug. 7 for P!ATD’s “Pray for the Wicked Tour.” This time the OG fans could legally drink beer while listening to “One of the Drunks.”

The new album, released on June 22, was a huge success debuting at number one on the Billboard top 200 list this July. Fans poured into the large arena in order to catch a glimmer of P!ATD’s lead singer, Brendon Urie.

The show opened with L.A. singer Haley Kiyoko, whose song, “Girls Like Girls,” launched her as one of the modern faces of ‘queer pop.’ During the performance, audience members proudly waved rainbow flags to show support of the LGBTQ community.

Kiyoko had a wonderful stage presence and showed off her strong vocals during her entire set and didn’t hesitate to break out in dance. She was fun to watch and her songs from her new album, “Expectations” were catchy and dance-worthy.

New Jersey-based indie band A R I Z O N A played after Kiyoko. The band, who had a Mumford and Sons vibe while still standing out as a mixture of  electropop and rock, was another great group to watch perform with Zachary Charles’ strong lead vocals. The song “Cross My Mind” stood out in the set. Their latest album, “Cold Nights // Summer Days” is available now.

The sound in the arena was deafening as the countdown to P!ATD began. It was hard to even hear yourself think as the clock started counting down from five, four, three, two, one…

Then up from the stage floor popped Brendon Urie. He began the concert with the album opener, “F**k a Silver Lining.” The enthusiasm from the crowd was amazing and nearly everyone knew every lyric and cheers and claps didn’t stop until the very last number.

Urie is a born performer and captivated the entire audience with his all-encompassing musical talent. He sang, danced, played piano (suspended in the air at one point) and played the drums.

Urie was backed by a small orchestra of musicians with a mixture of strings and brass to compliment his vocals.

Throughout the “Pray for the Wicked” album there is a subtle jazz sound. Songs like  “Roaring 20s” encapsulates a mixture of rock and jazz. This style isn’t new for P!ATD. Their 2016 album “Death of a Bachelor” also has several jazz numbers including the title song. The jazz and rock mix well and Urie’s vocals and lyrics to capture the style almost to perfection.

Having been a fan of the band since I was in middle school, I couldn’t help feeling excited myself when Urie played songs from P!ATD’s early albums. Including, “This is Gospel,” “I Write Sins Not Tragedies” and “The Ballad of Mona Lisa.”

The tour is also centering around the organization, Highest Hopes created as a way to support non-profit organizations that advocate for human rights. Many audience members proudly waved rainbow flags during the song, “Girls/Girls/Boys.” Urie also joined in wrapping the flags around his neck.

To donate to Highest Hopes text HOPES to 50555.

The show was a spectacle of talent and showmanship with floating pianos, pyrotechnics and musical instruments that popped up out of the floor. I could feel the vibrations in the floor and in the air as people cheered during “Hey Look Ma, I Made It” and “Nine in the Afternoon.”

There were moments where the crowd carried half the songs themselves. It was a testament to the bands lasting impression on pop music. Every song was applauded with deafening noise.

One of my favorite moments was the performance of “Dying in LA.” The song stands out on the “Pray for the Wicked” album as an acoustic song with a slower beat. The lyrics read like a ballad and speak to all the dreamers. Urie sang and played the song on a white piano that slowly rose from the floor into the sky above the audience. The entire arena was lit with phone flashlights. It was a great way to show off the softer side of the album, which is mostly headbangers and dance music.

Urie brought out his Freddy Mercury side for the cover of Queen’s “Bohemian Rhapsody.” They also covered Cyndi Lauper’s “Girls Just Want to Have Fun.” Urie had worked with Lauper on Broadway when he had a short stint in “Kinky Boots.” The music and lyrics were written by Lauper with the show debuting in 2013 in New York.  Urie took over the role of Charlie Prince for a short period last year starting in May.

The concert was magnificent. All three bands blended together well with the message of inclusion and human rights perfectly laced throughout the entire performance.  It was great to see the excitement from the crowd and knowing that there was not a single empty seat throughout the entire Pepsi Center, which seats over 20,000 people.

For other events at the Pepsi Center in Denver visit their website: https://www.pepsicenter.com/

Arts and Culture Editor Claire Oliver can be reached at entertainment@collegian.com or on Twitter @claire_oliver21.