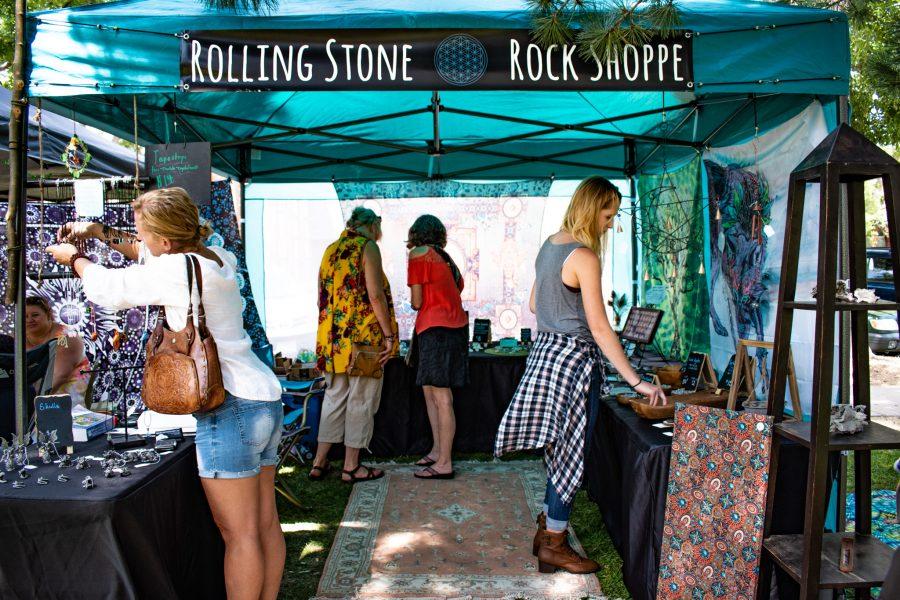 Malicious archetypes saying spooky spells—this is a cliché at the forefront of many people’s minds when it comes to the term ‘witch.’ Paganism, commonly thought to be synonymous with witchcraft, is often just as misconceived in modern culture as it is in fairy tales.

If you want to be a part of a community, watch, look, listen and learn first. And ask permission.”-Soltahr Tiv- Amanda, Pagan Pride activist and speaker

Fort Collins Pagan Pride is held annually in August at Old Town Library Park and is a day to celebrate pagan culture, traditions and heritage. Despite aiming to help further establish the Fort Collins pagan community, the event emphasized inclusivity and welcomed all kinds of people, pagan or not, to join the festivities.

The event included several aspects of pagan culture, such as merchant booths, traditional pagan rituals and live music. Informational workshops were also held throughout the day where attendees were invited to engage and learn about polytheism, spirituality, misconceptions about pagan subcultures and the purpose of Pride.

Nick Jones, a member of the Pagan Pride Project organization, helped create the event to spread awareness about the message of paganism and build a safe community for all types of people to join and embrace their diversity.

“A lot of times we find anyone who is not following the same path as their family, whether that’s through spirituality, sexual orientation, gender expression or any of those things,” Jones said. “Support and people who understand and accept them is critical for them to find community.”

Members of the Fort Collins Unitarian Church Beckie Wagner, Kirsten Hartman and Chris Howlo came out as well to speak to individuals about practicing spirituality through love and compassion.

“Part of the challenge is maintaining an open mind about what divinity is for yourself and for others,” Wagner said. “It’s being able to continue to love and be open in the face of diversity.”

“We find a lot of times, anyone who is not following the same path as their family, whether that’s through spirituality, sexual orientation, gender expression, or any of those things, that support and people who understand and accept them is critical for them to find community”- Nick Jones, member of Pagan Pride Project

Guest Speaker Soltahr Tiv- Amanda spoke at the event covering relevant socio-political topics such as cultural appropriation and modern-day colonization, as well as how people should enter a new cultural space in which they are not familiar.

“People cannot just take and take and expect to have something,” Amanda said. “If you want to be a part of a community, watch, look, listen and learn first. And ask permission.”

More information about the Pagan Pride Project can be found on their website, www.paganpride.org.

Collegian Arts and Culture reporter Elena Waldman can be reached at entertainment@collegian.com or on Twitter @WaldmanElena.