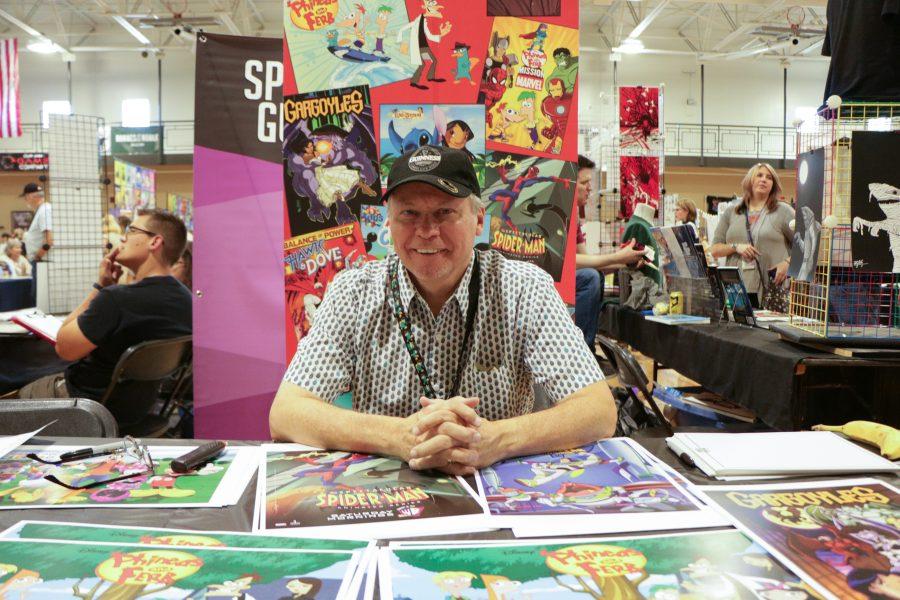 Greg Guler the artist behind Phineas and Ferb, Lilo and Stich smiles while sitting at his booth. (Devin Cornelius | Collegian)

Tonight on CTV, your favorite Entertainment Anchor Justin Rios gives us a behind-the-scenes look at the Fort Comic-Con, mourns the passing of The Big Bang theory, and so much more! (CTV Entertainment | Aug. 28, 2018).

Pop culture enthusiasts of all ages united for a weekend of panels and cosplay at the fourth annual Fort Collins Comic Con on August 25 and 26. The two-day event brought the fun, nerd-friendly atmosphere of the typically larger Cons to Northern Colorado on a smaller scale.

Kimberly Chambers, the director of SPLASH, a local LGBTQ+ non-profit group sat near the entrance welcoming guests and raising awareness for their organization.

We like bringing SPLASH to comic con because it is an inclusive space where we know we can reach out to the LGBTQ community and also cross over into allies and families.” Kimberly Chambers, the director of SPLASH

SPLASH caters to at-risk youth and young members who struggle with their identities and sexual orientation. The organization is a safe space for this kids to be themselves.

“We like bringing SPLASH to comic con because it is an inclusive space where we know we can reach out to the LGBTQ community and also cross over into allies and families,” Chambers said.

Dave Venable, a Fort Collins resident and a local cosplayer, dressed as the charming yet diabolical Negan from AMC’s hit drama “The Walking Dead.” He even sported the iconic bat, Lucille, from the show.

“I’ve been to the Denver [Comic Con] and this is so much more personable,” Venable said. “I’ve met so many people that I know and I can spend more time with the vendors than I can in the Denver show, it is really completely different. And it’s for a cause, versus Denver just making money. We absolutely will be back.”

This year’s Con featured many locally and globally known comic book artists and writers. One artist was Greg Guler, known for his graphics seen on hit Disney shows such as Lilo and Stitch and Gargoyles.

Panelists at the Con covered an array of topics including forums on how others can take their skills to the next level. Several local groups held panels such as Geek Girls Brunch who taught kids how to build their own superheroes.

The event also offered vendors, gamers and cosplayers opportunities to network. The Cosplay Catwalk was an event for the Con-goers of all ages to show off their cosplaying ability. Each one had the opportunity to strut their stuff in front of their fellow geeks and nerds.

“This is my third year at the Fort Collins one [Comic Con], which is so much fun to see all the local people and [those] dressing up,” Fort Collins resident Alexis Hmielak said.

In addition to the catwalk and multiple panels, there were Ghostbuster training camps and gaming competitions. F3 also had a host of food trucks including local favorites, “Mile High Lobster Club” and “Waffle Lab.” Both trucks can be seen on Tuesdays at City Park.

The Fort Collins Comic Con community service and family-friendly atmosphere is why local residents continue to return and join the weekend-long event. Even first-time Con-goers Laurie and Chris Vermette, are excited to join the fun next year.

“I’ve been watching the show since I want to be a vendor next year,” Chris Vermette said. “The thing I like the most about [Fort Collins Comic Con] is that it helps the community, the library district and all the stuff they do through the year with STEM and the kids, so that’s really the big draw for me. I want to be a part of that.”

More information about the Con is available at fortcollinscomiccon.com
Collegian reporter Deja Calloway can be reached at entertainement@collegian.com and on Twitter @callowaydeja.