The Rocky Mountain Collegian • May 11, 2018 • https://collegian.com/articles/aande/2018/05/good-reporting-begets-activism-walter-robinson-editor-who-led-investigation-of-abuse-in-catholic-church-discusses-spotlight-importance-of-free-press-at-the-lyric/ 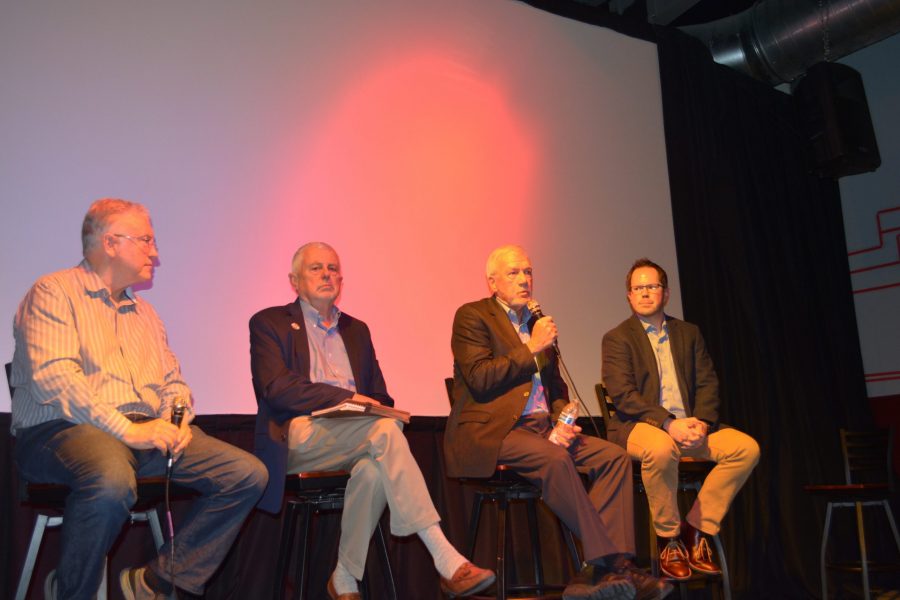 Greg Luft, professor and chair of the Journalism and Media Communication Department at Colorado State University, Neil Best, president and CEO of KUNC, Walter Robinson, editor-at-large of The Boston Globe, and Eric Larson, news director at The Coloradoan participate in a Q&A at The Lyric, which focused on topics surrounding free press and investigative journalism.

The Lyric screened “Spotlight,” the 2016 Academy Award-winning film for Best Picture that portrays The Boston Globe’s investigation of sexual abuse in the Catholic Church, which Robinson led. Following the screening, The Lyric hosted Robinson for a Q&A about the film and the importance of a free press.

The famed investigation by the Globe Spotlight Team won The Boston Globe a Pulitzer Gold Medal for Public Service in 2003. The team published about 600 articles in 2002 that exposed 249 members of the Boston Archdiocese of sexual abuse of children. The articles had a more significant impact than the team expected; the team’s work revealed abuse in Boston, but it also inspired victims from all around the world to come forward.

Robinson said the Globe Spotlight Team, which currently consists of 10 reporters, and other investigative journalists are essential to holding powerful people in institutions accountable.

“People need us because they want us to find out for them what’s really going on,” Robinson said. That very often requires us to dig deep beneath the surface because very often people don’t want to tell us the whole story. Sometimes, they don’t even tell us the truth. It’s our job to dig the truth out, and it’s important. It’s really important. Without an informed, engaged citizenry, democracy doesn’t work.”

“Spotlight” is currently on Netflix.

Aside from a couple of dramatized scenes, Robinson said “Spotlight” is an accurate portrayal of how the investigation occurred in real life. However, the movie packs five months of reporting into a two hour and nine minute runtime, which required filmmakers to chop up the story extensively.

During preparation for the film, Michael Keaton, who plays Robinson in the film, spent a lot of time studying Robinson’s voice inflections, mannerisms and inquiring about his life. For Robinson, this meant the tables turned.

“My job is to ask people questions,” Robinson. “My job is not to answer questions.”

Randy Bean, Robinson’s friend, said Keaton almost perfectly depicted Robinson. However, she has one concern: “There was not nearly enough snark.”

Bean is the Loveland-based documentary filmmaker behind “American Creed.” Although she would have preferred Keaton to characterize Robinson more realistically, which she said would have included more cynicism and humor, she said “Spotlight” succeeded at remaining true to the level of emotion associated with a topic like child molestation.

“I think it was well intentioned that they did not diminish in any way the subject,” Bean said. “There are real victims out there. And what felt intentional all throughout was keeping their experiences, their hurts (and) their wounds in mind.”

The Q&A also featured Greg Luft, professor and chair of the Journalism and Media Communication Department at Colorado State University, Eric Larson, news director at The Coloradoan, and Neil Best, president and CEO of KUNC. They focused on topics involving The First Amendment, the importance of investigative journalism and how journalism exists in the current political climate. However, the topic that seemed to prevail was using journalism as a tool for change.

Walter Robinson began at The Boston Globe as a student intern reporter in 1972 and never left.

“I think you have to have a little bit of a spirit of activism in yourself to be the person who jumps on the stories, but your role as a journalist is not to then become involved,” Luft said. “You’re job is to cover and report the information.”

Robinson said the activism aspect of journalism is often underused.

“As journalists, sometimes I feel the responsibility we fail to meet most often is to provide a voice to people who have no voice,” Robinson said. “That involves turning over rocks that we would otherwise not look under.”

Although the Spotlight stories published only 16 years ago, a lot has changed in the journalism industry. Larson shed light on the obstacles journalists face today.

“There is a larger variety of tools,” Larson said. “… In one way, it makes it easier. But in another way, it makes it harder because for a person to be heard, it used to be, ‘Well, I need to go to the paper.’ If I want to be heard now, I go to my social media.”

The Lyric is known for hosting events that foster discussion about social problems. Michael Putlack, owner of The Lyric, said the current trend of scrutinizing the media inspired him to host this event.

“We just thought it would be a cool opportunity to do a fun community event and highlight the importance of journalism in our country because it’s something that’s been so attacked lately,” Putlack said. “And, frankly, ‘Spotlight’ is one of my favorite movies. Being in the industry, I got to see it months before it was released, and I was like, ‘I think this is going to win Best Picture.’ I felt so validated when it did.”

The night emphasized the impact of investigative journalism, but Robinson also noted his genuine love for the work.

“To me, there’s nothing more fun than to be the first person to find something out; particularly, something that’s important,” Robinson said. “I’m still amazed that they pay you to do it. Although, not enough.”

While answering one of the last questions in the Q&A, Robinson captured the overarching sentiment of the night: “Good reporting begets activism.”

Randi Mattox can be reached at entertainment@collegian.com or on Twitter at randi_mattox.