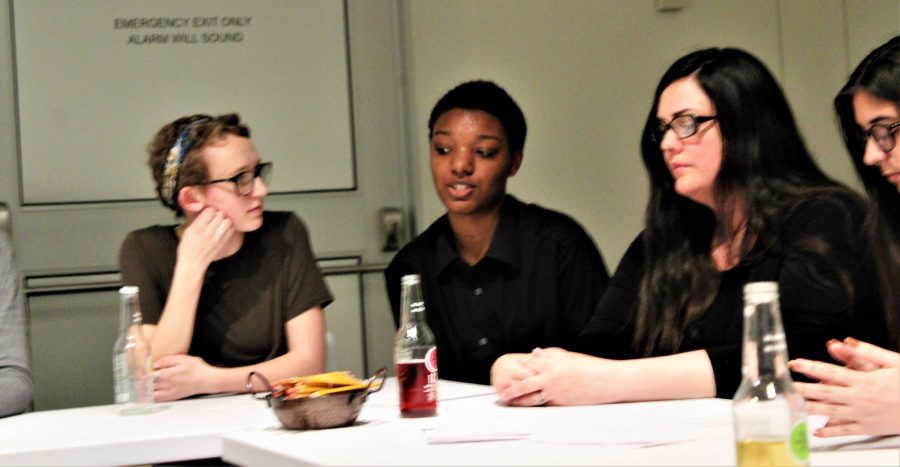 Oliver Addams, a CSU student, answers questions at a panel after a showing of short films about sexual assault at an event hosted by the WGAC.

In honor of Sexual Assault Awareness Month, victims of abuse came together April 12 from 5 to 7 p.m. to discuss their experiences at the Alt. Break Digital Shorts & Panel.

With the help of the Women and Gender Advocacy Center and Story Center, seven Colorado State University students were able to share their stories through short films. These storytellers included Victoria Benjamin with “Shadows,” Oliver Addams with “Name It,” Kimberly Brestin with “Dear Grandpa,” Theo McFarland with “Written On The Body,” Kaelynn Jensen with “A-Hand-Me-Down-Graveyard,” Ally Kempf with “Progress” and “Mountain Girl” by Abigail Bearce.

Every film shared a similar style in which a single speaker would recount their experiences and aftermaths within the span of a few minutes. Visually accompanying these stories included everything from illustrations to photos to video snippets. Before the beginning of each story, the multiple screens would show a rhetorical question to the audience previewing of what was to come. While Story Center assisted in the production aspect, it was primarily the storyteller’s creative vision that took the lead.

I wanted to make (the film) for the other little girls that were abused by family members and girls who grew up and were raped over and over.” – Kimberly Brestin, student filmmaker

After all of the films were screened, the storytellers along with WGAC representatives held a panel where they discussed their experiences in the creation of the films.

During the panel, Benjamin said she did not expect that telling her story would be as emotionally difficult as it turned out to be.

“I’ve always said I’m cool you know,” she said. “(My experiences) have always been distant for me to where I’ve been able to say, ‘Yeah, I’m a domestic violence survivor. Yeah, I’m a sexual assault survivor. Yeah, I’ve survived child sexual abuse.’ And I’ve been okay with saying that. But, when it gets to actually telling a story, a specific story, it’s very emotionally charged, and I had a very difficult time with it.”

All of the films were primarily created over the course of five days —Sunday through Friday— during spring break in Palisade, Colorado. During this time, the storytellers stayed together at a farm. Monday was primarily dedicated to team building exercises between participants. On Tuesday, Story Center arrived, and they began recording. This was the first time WGAC has held an event like this, according to Casey Malsam, assistant director of victim advocacy for WGAC. It is confirmed that similar events will be held in the future, but it is unknown whether or not it will be annual.

Brestin said she decided to share her experiences because she wanted other victims of abuse to tell their stories.

“I wanted to make (the film) for the other little girls that were abused by family members and girls who grew up and were raped over and over,” Brestin said. “I want other little girls to see that and see that I still made it to college. I still am doing really impactful things on campus. I want them to see that I survived this. I want to be the person for someone that I never got.”

Kristy Kumar, assistant director of programming for WGAC, said she was very pleased with the results of the event.

“I’m so proud to have been a part of this experience,” she said. “We’re given a single narrative around interpersonal violence and … I feel grateful for the gift of multiple counternarratives and being able to share a community with each other. It wasn’t about getting together and crying, it was about getting together and celebrating something so I feel honored to be a part of that.”