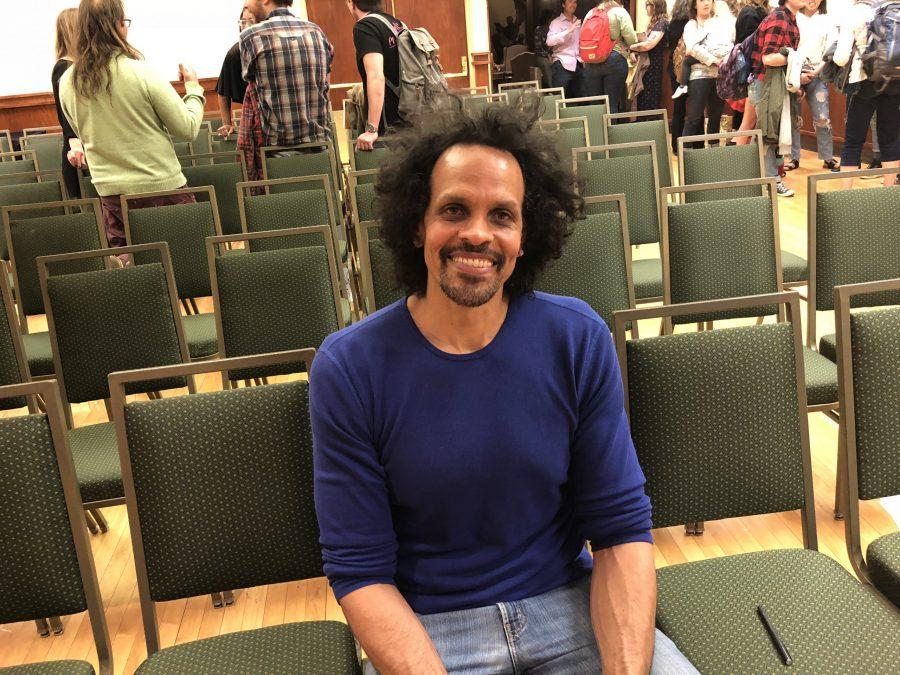 These were just a few of the pieces that poet Ross Gay read at the Lory Student Center. The event was the seasonal finale of CSU’s Creative Writing Series. Gay’s reading offered a mélange of humor, social, and environmental commentary.

Gay, the recipient of a Guggenheim Foundation fellowship, read various poems and short essays to a packed audience Thursday evening in the Cherokee Ballroom.

One piece, called “Tomato On Board,” was replete with images of a narrator carrying a tomato plant onboard a plane. Throughout the piece, Gay likened the plant to a baby.

“When we landed,” Gay read, “my arm went reflexively across the seat, holding the little guy in place.”

“An Abundance of Public Toilets,” used humor to explore the country’s obsession with materialism at people’s expense. Images included a scene of a porta-potty, which Gay likened to a church confession booth.

The reading was sponsored by the CSU Creative Writing Series, in conjunction with the College of Liberal Arts Thematic Year on Diversity, Inclusion, and Free Speech. Audiences packed the ballroom, with extra seats being brought in. An American Sign Language interpreter was also present.

The way I think of it, joy is sad too.” Ross Gay, poet

In one of his pieces, “Sharing With The Ants,” Gay likened shriveled fruit to a “almost testicular papoose.”

Gay laughed alongside the audience. In addition, Gay also engaged with attendees directly.

Before reading another piece entitled “Nicknames,” Gay asked audience members for their own embarrassing nicknames. Suffice it to say, responses were on the raunchy side.

Gay, who teaches at Indiana University, is the author of three collections of poetry. His most recent is 2015’s “Catalog of Unabashed Gratitude.” In addition, Gay is among the founding board members of the Bloomington Community Orchard, a non-profit organization offering free fruit to the Bloomington, Indiana community.

The reading was followed by a question and answer session. There was a range of questions from the audience.

“Have you always been joyful?” one attendee asked.

“I think I am kind of a melancholy person,” Gay responded. “I have always been withdrawn and I always loved moody music.”

“Bringing The Shovel Down” and “Against Which.”

Gay said he liked practicing joy, noting that joy offers a connection to his melancholia.

Other questions addressed Gay’s writing processes. In particular, Gay described the act of revising old work, along with the experiences involved in writing poetry and essays.

“I am drawn to poems when the mystery is greater,” Gay said. “Like there is less connected tissue.”

Gay added that essays are “a little more in the realm of the knowing.”

And another question for Gay? His thoughts on spiders.