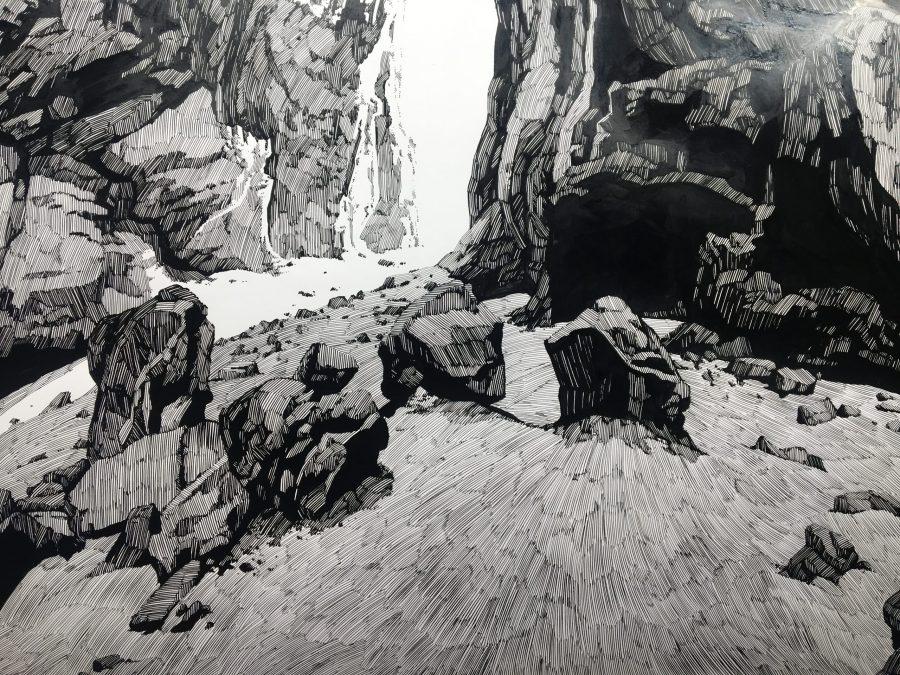 Pictured here is a closeup of Sabin's latest work, "Earthship." This series reflects nature and how man intervenes. Sabin felt we intervene so strongly we have even managed to do it on Mars. (Sarah Ehrlich | Collegian)

We as humans tend to be an intrusive species.

CSU resident artist Eleanor Sabin has finished her most recent drawing and sculpture project, “Earthship”, a look at how man-made objects make their way into nature. Inspiration came from a photo taken by Curiosity, a Mars rover.

“I started to wonder where you could go in the age of the anthropocene to truly find wilderness,” Sabin said. “I decided you would have to go the last frontier, which is outer space. I think there is nothing left on this planet that hasn’t been touched by man, and Mars is the closest thing we have to real wilderness.”

Sabin’s official field of study was sculpture, but she has always been attracted to drawing, especially using pen and ink. She likes to combine nature illustrations with architectural lines because, on paper, the laws of physics don’t limit the idea, like a sculpture would. Coming from the East coast and living in various places has given Sabin many perspectives on nature and how we interact with it.

“My daily life is filled with examples of the conflict between the manmade and the natural world,” Sabin said. “I am fascinated by these zones of tension where the fabricated and the organic converge.”

The gallery show will be up until April 30 in the Visual Arts Building.