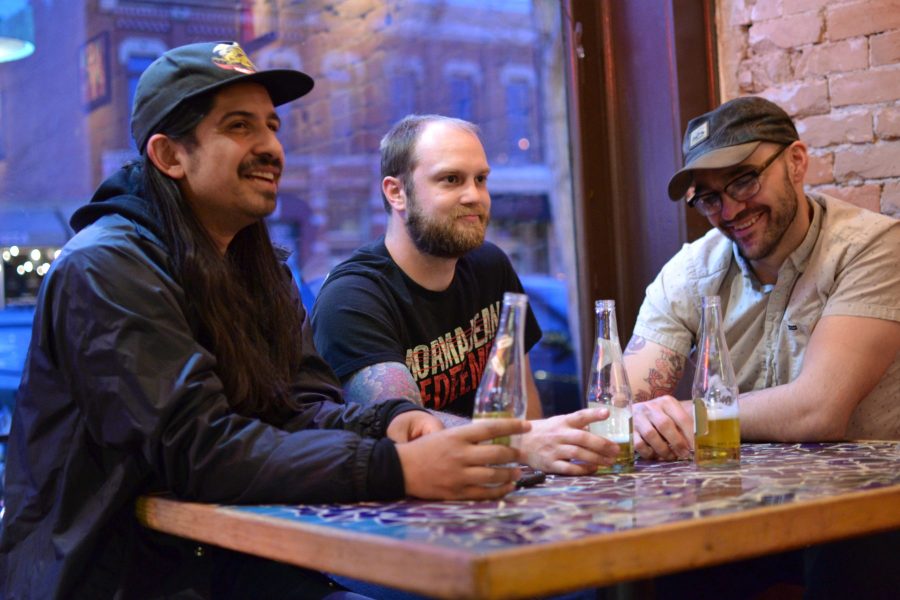 The members of I Am The Owl enjoy getting beers and listening to live music at Surfside 7 in Old Town Fort Collins. The band has been together for 4 years and Surfside 7 was the first place where they had consistent shows. They will be performing on April 27th for FoCoMX at The Whisk(e)y. (Matt Tackett | Collegian)

A group Fort Collins music scene veterans are committing themselves to producing the important messages behind punk music with some Colorado flare.

Josh Harrelson, Kyle Krueckeberg, Josh Rivera and Corey Hatch are members of the band I Am The Owl, officially formed in the fall of 2014, after a group that Krueckberg, Rivera and Harrelson played for fell apart. But the men still wanted to make music together.

According to the band, back in the days of their beginning, Fort Collins bands were practicing in garages, basements and any other spaces they could find. Because of this, their first six months as bandmates were characterized by grueling hours in a freezing cold warehouse with only one plug-in heater to warm their frozen hands between songs.

“It was so cold you couldn’t feel your fingers, it was miserable,” said Harrelson, guitarist for the band and a Colorado State University alum. “But that was all before. Fort Collins is really good now, and there are practice spots all around town.”

I Am The Owl said that not only are Fort Collin’s bands helping each other out immensely, but businesses have popped up all around Fort Collins that support the music scene. The growth of new venues such as Washington’s and The Downtown Artery are giving bands opportunities to flourish. And as Fort Collins changed, I Am The Owl changed too.

“Back then we were doing a way more straight-forward punk rock sound,” said guitarist and vocalist Rivera, who is also a member of Fort Collins local band Autumn Burn. “And that’s kind of what we started the band as, just a kind of fun, easy to play punk rock band. And then over the past couple of years, we definitely started getting heavier.”

According to the band’s website, I Am The Owl has been described as “punk meets metal from the era when rock gods wielded axes… high volume music that inspires mosh pits.” Their bio reads, “In an era where many have wondered if rock ‘n’ roll was still alive, I Am The Owl has committed to a no-compromise approach to making heavy music for people who love heavy music.”

The men receive copious amounts of hate mail via Facebook and Instagram that criticizes their claim to the punk genre whilst cultivating such a heavy sound. However, the band said punk is a counter-culture movement and an attitude that they adhere to.

“The attitude is there, and I think the message is about as punk as it gets,” said Harrelson. “It is very obviously political.”

For bass player and vocalist Krueckeberg, the political message is clear.

“And then, you know, it happens,” Rivera said. “Trump gets elected, and after that, it was like, ‘Now there is really some shit to write about.'”

Rivera said that many of his lyrics elicit a message of power in solidarity and connecting with people around you.

“You turn on the T.V. and it says, ‘you’re in this camp and you’re in this camp, you all are going to start butting heads and fighting,'” said Rivera. “But we have a lot more in common with each other than we do with anyone running the government. They think they can just divide us up and make us all pissed off at each other.”

The band’s drummer, Hatch, hopes that the band’s music will encourage people to think for themselves.

“Don’t blindly follow anyone or anything. Believe in what you think is right and be able to justify it,” Hatch said. “The biggest message I take from our music is to just be yourself. Playing our songs is a huge outlet for me to hit some shit as hard as I can and completely let loose. My hope is our audience can feel the same freedom listening to our music as I do playing it.”

Hatch joined the band 3 years ago and recently underwent a move from Fort Collins to New York City. Although his time with the band has been shorter than other members, he consistently makes trips back to Colorado to make music and perform. The motivation to do so, Hatch said, comes easy when you care so much about something.

You turn on the T.V. and it says, ‘you’re in this camp and you’re in this camp, you all are going to start butting heads and fighting.’ But we have a lot more in common with each other than we do with anyone running the government. They think they can just divide us up and make us all pissed off at each other.” -Josh Rivera, vocalist and guitarist for I Am The Owl

I Am The Owl’s unique sound comes from their close-knit collaboration with each other.  Instead of just one member writing the lyrics and the instrumentals of a song, the men create by melding their ideas together and playing off of each other. All four members equally contribute to songwriting and cultivating.

“My favorite part is just being able to come up with my own stuff and bring it to these guys and have them actually enjoy it,” Krueckeberg said. “It’s not just, ‘No, you will play what I wrote for you,’ like a robot.”

According to the band, if only one member writes a song and completes it, it’s not I Am The Owl.

I Am The Owl is named after the Dead Kennedy’s song “I am the Owl.”

“It doesn’t sound like us until everyone else peppers their thing on it,” said Harrelson.

The band said that their new album is an exciting product of their collaboration, resulting in a cohesive sound within the work that is all their own.

“The new album is probably the coolest thing I’ve been a part of,” Hutch said. “I am so excited to release it and see where we go from here.”

I Am The Owl will perform their new music this year at FoCoMX on April 27 at 9:15pm at the Whisk(e)y.