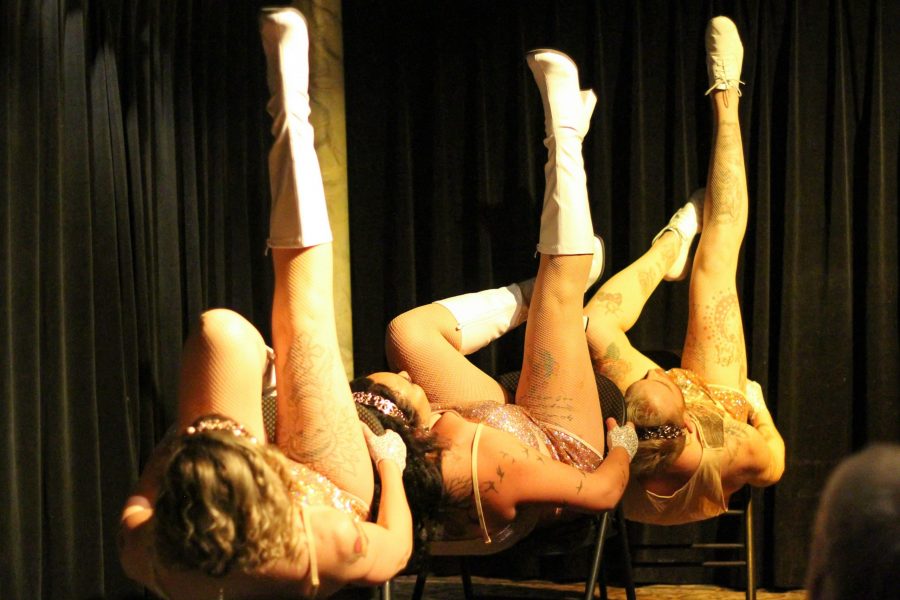 The Cupcake Cabaret is bringing sexy back one pastie at a time.

The local burlesque troupe performs a monthly variety show. This month, the theme was 90s night, the company showed just enough to keep the audience grooving all night long.

“I’d define burlesque as the art of the tease,” said burlesque dancer whose performer name is Scarlet. “That’s what makes it different from stripping. The reveal moments are pretty short and most of the burlesque dancers have substantial amounts of other dance training”

This show incorporated tons of dancing. With a 90s theme, the company consisting of men and women jammed out for two hours to the top hits of the 90s in both group numbers and solo performances. Songs like “The Sign” by Ace of Base and “Closer” by Nine Inch Nails pulsated through the crowd while people (including myself) were dancing out of their seats. The mixture of dance styles, from belly dancing to some serious hula hooping, made it a joy to watch these dancers move as one unit and also shine in their own solo efforts.

She worked that stage like no other and made me seriously consider becoming a heterosexual and a burlesque performer.

Dancer Luella Lovecraft dazzled with her beautiful striptease by seductively taking off her long gloves with her teeth and gradually untying and slipping off her velvet gown to reveal a bedazzled bra. As she unhooked the strap, she spun around showing the entire top half of her body with her nipples covered with rhinestone pasties with tassels. She worked that stage like no other and made me seriously consider becoming a heterosexual and a burlesque performer.

The best part about this show is the wide range of body types and people in the company. Instead of hiring the skinniest people in Fort Collins, the cabaret is body positive. There were men with muscle, people with tattoos and dancers of all heights and weights. It was great to see such a confident group of people fearlessly get up in front of a crowd.

The male dancers were also incredible. Towards the end of the show, one of the male dancers had his own striptease act. With his face veiled, he too sensually removed articles of clothing like the others and even caressed some of the male audience members and then yanked off the veil to reveal his face. Not only was his dancing confident, but it was transcending.

There is only so much you can get out of an art form that isn’t evolving. So, after a certain point, you have to start drawing from modern-day influences to build on to burlesque to make it feel fresh and new.” – Julia Diverdi, director of the Cupcake Cabaret

And no cabaret show would be complete without a drag queen. Denver’s Mia Staxxx did a beautiful number to Christina Aguilera’s “Genie in a Bottle” with finesse and sexually charged flair.

To bake the perfect cupcake, all you need is self-confidence, dance skills and personality. There is no room to be self-conscious when you’re surrounded by a group of supportive and accepting people to cheer you on. And the more they strutted their stuff, the more invested the audience became. For a local burlesque group, The Cupcake Cabaret nailed every move they made with class and a sense of refinement and showed that burlesque isn’t stripping, it’s about having fun and making art with your best friends.

“There is only so much you can get out of an art form that isn’t evolving,” said cabaret owner Julia Diverdi. “So, after a certain point, you have to start drawing from modern-day influences to build on to burlesque to make it feel fresh and new.”