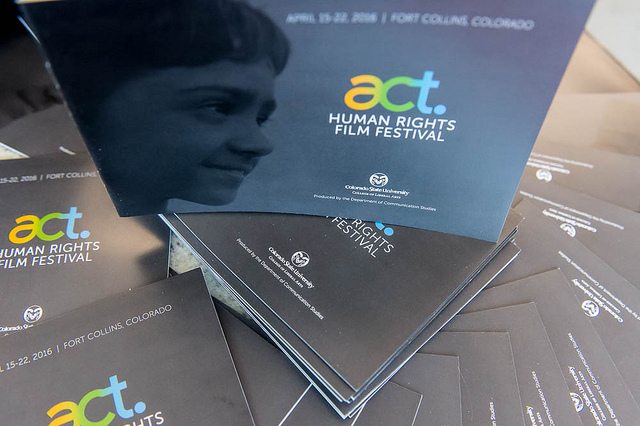 Thursday night in Colorado State University’s Eddy building was a place for enlightenment and inspiration.

The third annual ACT Human Rights Film Festival kicked off with a presentation of eight student films from across the country.

Each year, the festival showcases various documentaries focusing on human rights issues across the world. This year’s student shorts cover a range of topics such as sexual assault, immigration, domestic abuse and war.

“The fact that we have animation, cut outs, traditional animation … we have films touching on issues of domestic abuse and sexual harassment,” said Scott Different, professor of film and media studies at CSU and host of the presentation. “These are weighty big themes, and yet they’re all conveyed succinctly within four or five minutes. I could not do that. I’m so in awe of what students are doing these days.”

The audience was shown the eight selections chosen by the judges for this year’s presentation, including the following: “Paris,” directed Mauricio Jauregui, “Blue,” by Maryam Farahzadi, “Badlands Bloom,” by Atiyeh Hess, “The Bird Painter,” by David Eisenstandt, “Domestic Violence PSA,” by Gillian Copeland, “Grit,” by Blake Sepe, “Mija,” by Sophia Stills and “Unspoken,” also by Sepe.

First place went to Jauregui for “Paris,” a non-linear story about a drummer after experiencing sexual assault at a party. Second place went to Farazhadi for her cut-out animation “Blue,” partially based on her experience as an immigrant in the United States.

After the showing, the host and judges skyped in the first and second place winners for a Q&A session open to the audience. Each director revealed what inspired them to make their films, why they chose their filming styles and how they achieved the effects they did.

This year, the film festival will be taking a particular look at themes of civil disobedience, despotism, democracy, and immigration, due to the recent elections both here in the United States and abroad.

“I think the presidency of Trump and the conflict in Syria and issues around the #metoo movement has definitely triggered and inspired filmmakers across the world to make work that speaks to those issues,” Alshaibi, assistant visiting professor at CSU, said.

The remainder of the film festival will take place in various locations over the course of the week, with several encore showings.

Ty Davis can be reached at Entertainment@collegian.com or on Twitter @tydavisACW