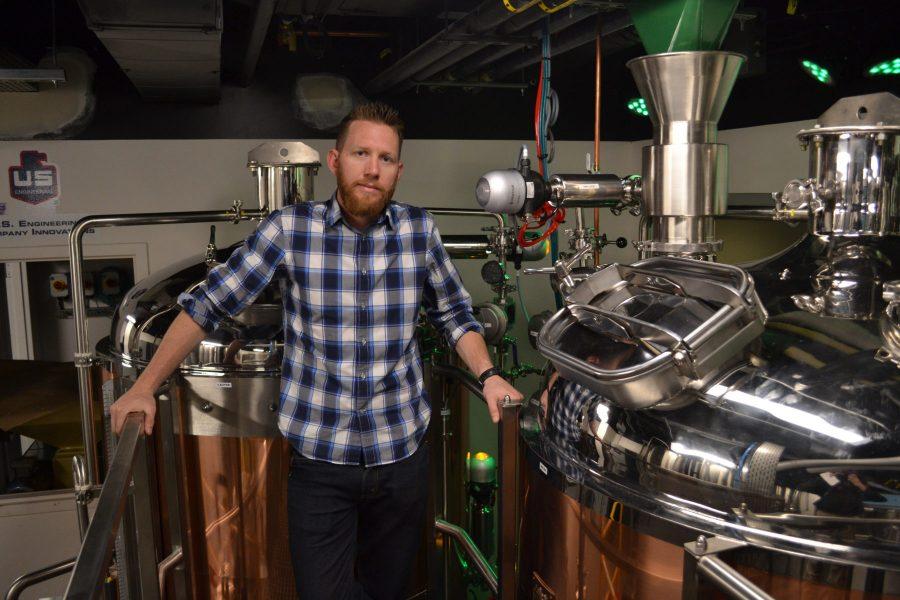 Jeff Callaway, Associate Director of the Fermentation Sciences Program stands between a lauter tun and a mash mixer in the new brewery located next to the Ramskeller Pub. The brewery is the second on campus and provides students of the fermentation sciences program with the ability to produce up to 10 hectoliters of beer or roughly 8.5 barrels starting the summer of 2018. (Matt Tackett | Collegian)

It was “serendipitous” that Associate Director of Fermentation Sciences, Jeff Callaway, and his colleagues were able to build an on-campus microbrewery that will open this summer.

After the Lory Student Center renovation was completed in late 2014, the University had to decide what to do with the space in the Ramskellar that was formerly dedicated to a window facing the mountains. They were looking for something that would please both students and alumni, and several different ideas were bounced around. Eventually, it was decided that the space would go to the Fermentation Science and Technology Department for the development a microbrewery.

According to Callaway, the brewery, which will officially open in the coming months, will serve as a place for students to receive “experiential learning,” whereas the program’s other location in Gifford will serve more as a place for them to learn the skills they need to operate practically.

“It’ll be all custom brews,” Callaway said. “Eventually, we’d like to work with department across campus to make brews with them as well.”

Scholars in the fermentation Science and Technology Department – which consists of only about 125 students – will develop their recipes and brewing methods in the Gifford facility, before producing their products at the microbrewery and selling them through the Ramskellar, CSU’s on-campus bar located in the lower level of the LSC.

It’s really, really exciting seeing it so close to being ready to brew. We’ve been working hard and getting it up and running all year.”-April Rieger, mechanical engineer student

While the brewery isn’t quite in operation, Callaway said that they’re hoping to start brewing as soon as possible, most likely this summer. Meanwhile, they’ve been tossing around ideas for what the first beer they brew will be.

The brewery cost an estimated 1.5 million dollars to build, but Callaway estimated that well over a million dollars worth of equipment within that figure was donated by companies around town. The donations were a result of the project serving as a true showcase of the industry, Callaway said. The donations resulted in the brewery being, as Callaway called it, “extremely advanced.”

With the capacity to create about 17 kegs of beer at a time, the operation will be less manual than some smaller breweries around town, making it comparable to New Belgium and Odell Brewing Company, Callaway said.

“It’s taken a village,” Callaway said of the creation of the brewery. “We had donations from (many companies).”

Callaway said the college of engineering even worked on it in their senior design projects.

Lejeune said that in addition to his team, electrical, computer, chemical and biological engineers all worked on the project.

“It’s really, really exciting seeing it so close to being ready to brew,” said senior mechanical engineering student, April Rieger. “We’ve been working hard and getting it up and running all year.”

Reiger estimated that she and her team have put in four to 10 hours each week since September on the project.

Rieger isn’t the only person excited to see the brewery in operation either.

Raymond and his friend, Geoff Kozie, a junior in the horticulture and landscape architecture department, noted that they’re looking forward to enjoying the brews that will be served in the Ramskellar, as well as continuing to enjoying a contemporary classic, Old Aggie.