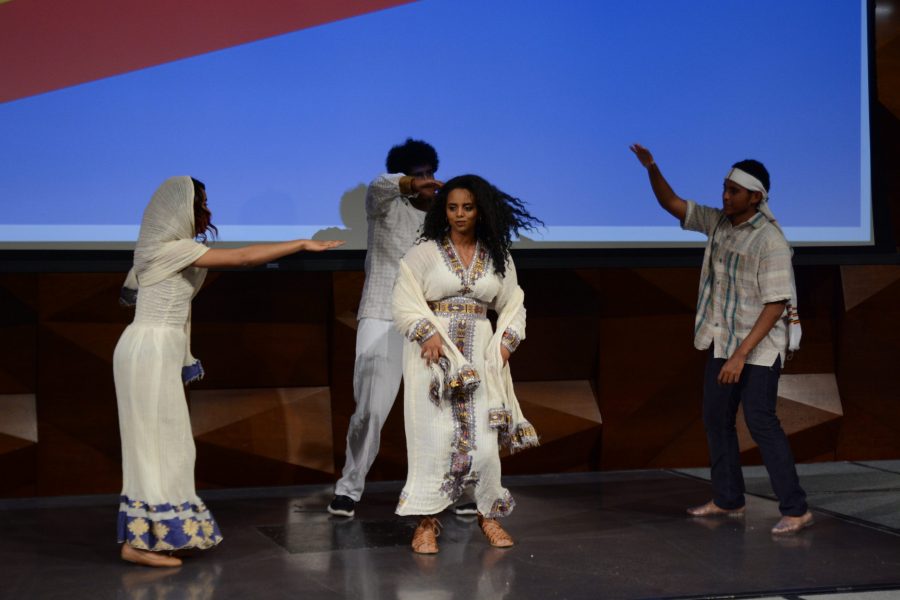 Africa United, an organization that that emphasizes the importance of educating oneself about Africa, put on their annual event to show the many different cultures of countries in Africa including Nigeria, Sudan, Ghana and others. (Mackenzie Boltz | Collegian)

The event, Africa Rise Up, educated around 300 members of the Colorado State University community about different African cultures and showcased art, poetry and dance from students involved with AU.

AU is an organization that emphasizes the importance of educating oneself about the culture and happenings of Africa. Every year, the group hosts African Night to share a deeper look at African cultures.

“I hope that the CSU community takes away the truth of Africa instead of what they hear of T.V. and other stuff,” said Nicole Acheampong, president of AU. “I want them to get a true-life experience of what Africa is and, on top of that, there are people on this campus that share their identities. They have a lot to offer and it’s time for Africa to stand out.”

This year, AU emphasized the opportunities and resources Africa has to offer despite negative media portrayal and misconceptions.

“The theme of the African Night is Africa Rise Up. That’s a woke moment for us, that’s something I want people to be aware of,” said Sandra Asante, vice president of AU.

Asante also spoke on modern slavery in Africa, which she said goes unnoticed in the CSU community. The event featured a play on the topic.

“We don’t really know about it, and we want to educate the community of what’s going on,” Asante said.

Each year, African Night encourages a space where Africans can be represented and empowered.

“(African Night is) a big part of the club,” said Huldah Berhe, a first-year political science major. “We try to organize help for our community, and make a safe space for African American students at CSU to come and meet students who are just like one another to make a more fun and enjoyable experience at CSU.”

Asante, who represented Ghana, recited a speech from Yaa Asantewaa, the Queen Mother of the Ashanti Empire (Ejisu).

“‘I must say this: If you the men of Ashanti will not go forward, then we will,'” Asante quoted. “‘We the women will. I shall call upon my fellow women. We will fight the white men. We will fight till the last of us falls in the battlefields.'”

Yaa Asantewaa is well known for her leadership position in the Ashanti-British “War of the Golden Stool,” which was a fight against the British colonists.

Arisson Stanfield, a fourth-year philosophy major, wrote and read a poem called “African Diaspora,” which described not only the oppression of Black people but also their rise to power and unification.

“Let my people go, we carry scars of war,” Stanfield recited. “I need to make the pilgrimage to Africa, black is buried treasured trove, black is gold.”

Some students said the event gave them the opportunity to reflect on their African lineage.

“I feel like Black people don’t realize that when it comes to African Americans, there’s more than just the American side, there’s the African side too and that’s another side of the culture than just being American,” said Corissa Norwood, a second-year health and exercise major. “Just knowing where we’re from, not just the slavery in America, but actually from Africa; what’s going on there, what’s happening, the music, the food, the celebrations (is important).”

After the presentations, the night continued with a fashion show, which showcased traditional clothing from Ethiopia, Sudan, Senegal, Guinea, Kenya and Nigeria.

The night ended with the announcement of the new AU leadership team, who plan to make the 15th annual African Night as successful as this one.

“We are declaring Africa as a whole needs to stand up and unite,”  Acheampong said. “This show’s target is to emphasize that Africa, as a whole, … will rise.”

Collegian reporter Daniela Navarro can be reached at entertainment@collegian.com or on Twitter @thedanielazahra.