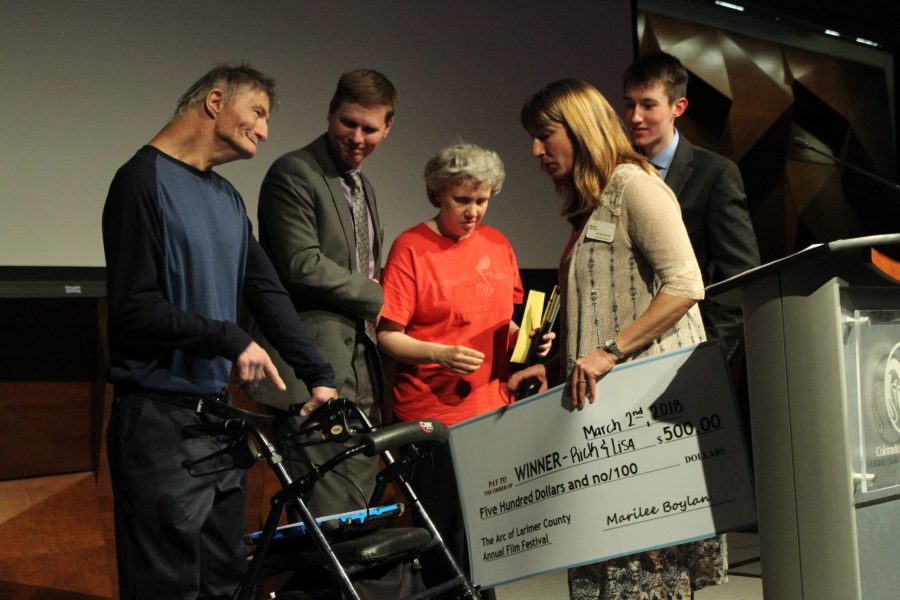 Lisa and Rick Keeton, stars of the documentary "The Adventures of Rick and Lisa", accept the first place award and prize of $500. The Arc of Larimer County was the main sponsor of the festival, which hopes to reframe people's thoughts on disability. (Sarah Ehrlich| Collegian)

The Lory Student Center held the 6th Annual ReFrame Disability Film Festival, hosted by the Arc of Larimer County, on March 2 to celebrate National Developmental Disabilities Awareness Month. Short films were featured to ” break down stereotypes about people living with intellectual and developmental disabilities,” according to the festival’s website.

Special guest and CSU professor, Dr. Temple Grandin, spoke about her autism and how it has affected her career path.

“I’ve seen a problem with overgeneralization (of autism),” Grandin said. “On one end of the spectrum you have Steve Jobs and Albert Einstein, and on the other end, you have someone with much more severe challenges. We need more ‘specific example’ thinking that separates solutions that work and do not work for people with disability.”

Films included various genres but each one had the same goal; to raise awareness about disabilities in northern Colorado. Some films were directed by people from Colorado. For example, “Lonely Highway” was directed by Andy Kwiatkowski of Colorado Springs, a 19-year-old who is on the autism spectrum. In his documentary, he talks about the challenges of making friends, his unusual behaviors and how he learned to cope with them.

“People have a lot of stereotypes about people with disabilities, especially those with developmental and intellectual disabilities. This festival is about reframing those stereotypes into something that is more accurate.”-Cari Brown, Arc of Larimer County

The winning film of this year’s festival is “The Adventures of Rick and Lisa,” directed by Kevin Rabon. The film documents a northern Colorado couple, Rick and Lisa Keeton, living with disabilities, their roles in the community and how they have stuck together. The film is available to view on YouTube.

Rabon was unable to attend the festival but thanked everyone in a video sent from Australia, especially Rick and Lisa, for taking the time to share their story.

“We did this film just to educate people about disability,” said Lisa Keeton, who was born blind. “We are human beings, and you can treat us like anyone else.”

The second place film went to “People First,” directed by Sam Lawrence who was diagnosed with autism spectrum disorder.

Other films from the festival:

Each film received positive feedback, and the Arc of Larimer County hopes the festival will continue to grow each year.

“People have a lot of stereotypes about people with disabilities,especially those with developmental and intellectual disabilities,” said Cari Brown, systems advocacy specialist and communications coordinator for the Arc. “This festival is about reframing those stereotypes into something that is more accurate.”

More information about disabilities in northern Colorado can be found at thearcoflarimercounty.org