3OH!3 recaptures their youth at the Aggie Theatre 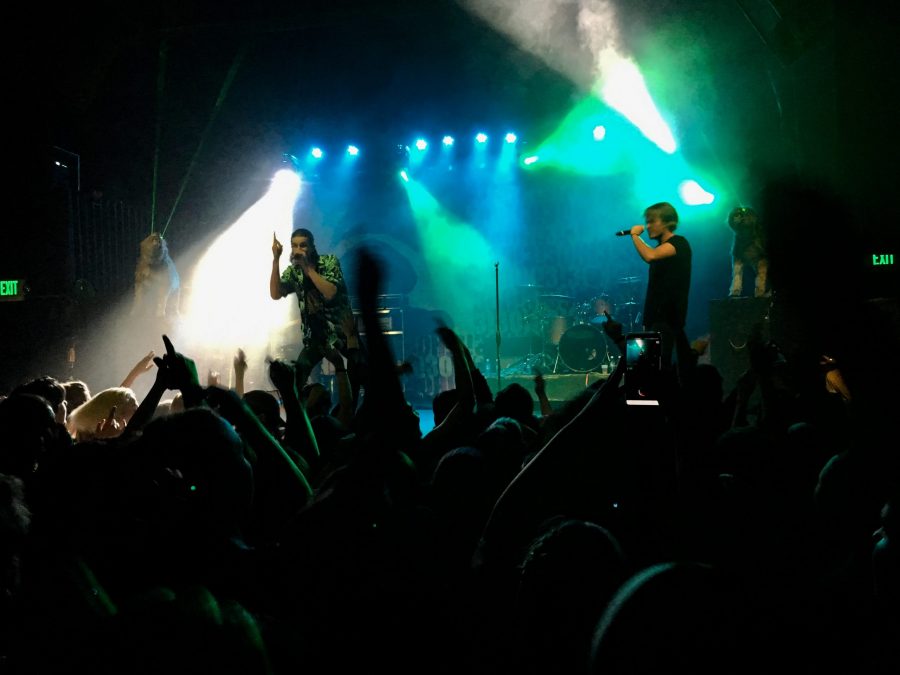 3OH!3 returned to their home state Saturday night, and they were as goofy as ever.

For over a decade, the electro-pop duo has proudly represented Colorado on the national music landscape. Known for collaborating with pop superstars Katy Perry and Kesha at the start of their respective careers and for popularizing the bizarre fusion of emo and southern hip-hop dubbed crunkcore, members Sean Foreman and Nathaniel Motte have had an interesting career.

On March 3, they performed at Fort Collins’ Aggie Theatre for the first time in nine years, Motte said. Fortunately, the concert was relatively short, only lasting a couple of hours. There were not a lot of opening acts to water down the experience. There was only one opener, DJ Spencer Foreman, who had some decent remixes of modern rap singles with smooth transitions in between.

Foreman’s performance actually acted as the perfect preview as what to expect for the remainder of the show. Much of the concert took on a vibe expected from an EDM concert. The music was energetic; however, there was not really an aggressive aspect to it, rather it was straightforward party music.

The vocal performances were a mixed bag. 3OH!3 has never been praised for their singing, but thanks to their experience as a group, it has improved to the point where they carried an audible melody. While it was tolerable, songs like “Touchin On My” were completely phoned in, and the pair did not even try to hit the easily attainable notes. “Colorado Sunrise” actually had some pretty nice singing on the intro, courtesy of Motte. However, even when the singing was decent, the overblown EDM instrumentals made it difficult to hear what they were singing.

Despite rapping in pretty much every song, the group has always been mediocre at it. The flows were not inventive, and the frequent corny bars did not strengthen the case for the duo’s legitimacy. The only time where the rapping was captivating was on the song “Two Girlfriends,” where both of them used more intricate flows that landed perfectly on beat.

It was hard to take them seriously when they did not take themselves seriously. Case in point, the set design included a pair of fake wolves with laser eyes and an American flag with the band’s logo and signature hand signs scrawled across.

Say what you want about them, but they do have quite a bit of self-awareness. They know they are ridiculous. They know what they are doing is immature. While they may be past the age where their style of humor is acceptable, it does not come off as forced or as though they are stuck in the past. They both seem to sincerely enjoy what they are doing, and I really cannot knock them for that.

There was also an undeniable chemistry between Foreman and Motte. This allows for some pretty off the wall stage banter. Working together for so long has made an unbreakable bond between the two, which was pretty endearing.

Coming away from a 3OH!3 concert, I feel indifferent. Not that it was forgettable or average. It was actually quite the opposite. The show was just super inconsistent in quality. Sometimes Foreman and Motte shattered my expectations with youthful, catchy and energetic renditions of their greatest hits. Meanwhile, other times they would produce an ugly offspring of EDM and suburban rapping. All in all, it really depends on what you are looking for in a concert. If you want to celebrate the group’s unique contributions to music or just want to party, then check them out on this year’s Warped Tour. However, if you are looking for a concert that is substantive and life-changing, then I would look somewhere else.