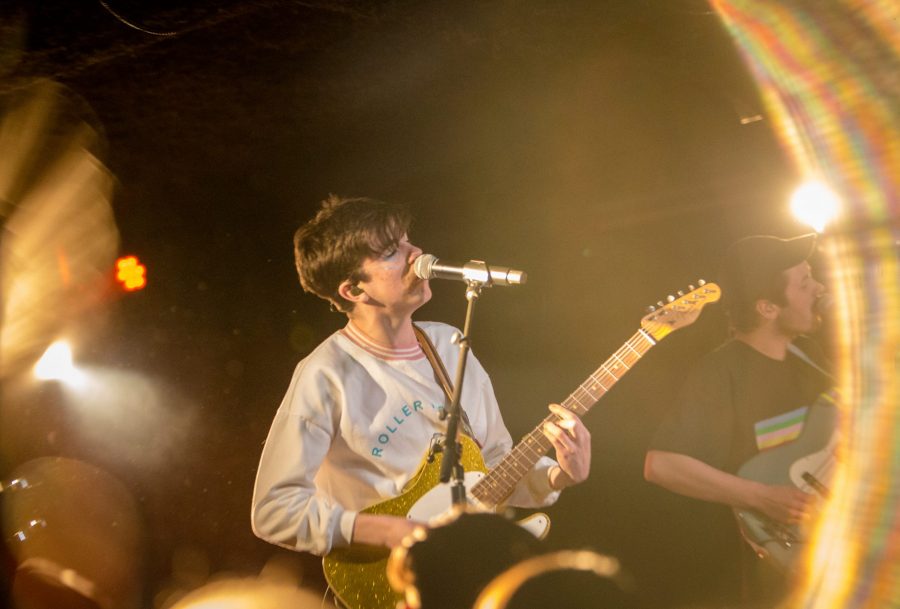 Declan Mckenna performs at Hodi's Half Note on March 16 during his United States tour. (Tony Villalobos May | Collegian)

Declan Mckenna, a 19-year-old musician from the United Kingdom came to Hodi’s Half Note on Friday, and he brought some fun with him.

Mckenna performed three songs for the Rolling Stones Magazine’s “Take One” series and sold out over 30 shows on his first United States headlining tour, including a performance at Coachella in April. Mckenna’s songs often tackle social issues and are inspired by real world events.

Chappell Roan opened for Mckenna. He performed with a stunning vocal range but a stage presence that left much to be desired. Despite a rather stale stage approach, Roal’s EP “School Nights” kept the crowd watching as they warmed the stage up.

While Chappell Roan tore down and went to hang out in the back, Mckenna started up on stage with his band. Mckenna started the night off a little slower and worked into higher energy songs as the crowd matched his energy.

Mckenna was a hit with the crowd, which was mainly made of high schooler to early college attendees. He even put on a tiara handed to him by a fan for several songs and dropped balloons down during his hit song “Brazil.”

Despite dealing with high altitude shift, Mckenna kept with quips and jokes in-between songs and continued to give the crowd a fun experience as he danced around stage. The weakest points seemed to be in his band. Their chemistry on stage worked well, and their energy was high and involved, but they still paled next to that of the 17-year-old pop artist.

Mckenna is continuing on his United States tour and is working to avoid major cities, opting for smaller cities similar to Fort Collins for his tour.

Collegian Photography Director Tony Villalobos May can be reached online at tvillalobosmay@collegian.com or on Twitter at @TheTonyVM