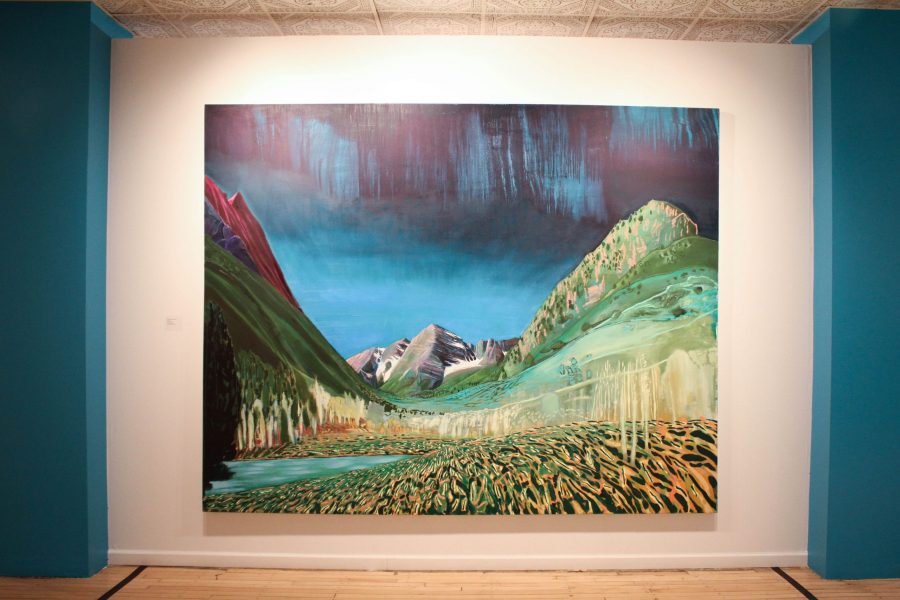 Sue McNally's "Maroon Bells, Colorado" piece hangs in the Fort Collins Museum of Art. The piece is part of a selection of McNally's "This Land is My Land" show, which focuses on landscapes in the Western United States. McNally is working on making this body of work represent landscapes in all 50 states. (Ashley Potts | Collegian)

Patriotic themes have found their way to the Fort Collins Museum of Art.

Not American flags and aggressive bald eagles, but intimate portraits of wonders within the United States.

Rhode Island-based painter Sue McNally  has been working on illustrating American landscapes in her new installation, “This Land is My Land.” Currently, her work depicts New Mexico, Colorado and Washington, and she will eventually capture a landscape for each state.

McNally has been working on the project since 2010, with her first painting of the Devils Tower in Wyoming. The paintings are from McNally’s vantage point and show her relationship to America’s different landscapes and the stories and people behind them.

McNally photographs the desired landscape and collages the photos from different viewpoints, which then becomes her template for painting. Her paintings have no human element, and she tries to experiment with colors and space to create a new view of nature.

Her large canvases are filled with neon pinks, purples and blues, with different textures that give these paintings a dimension unlike traditional landscape paintings.

“America is such an incredibly diverse country both in its populace and in its geography and landscape,” McNally said in an artist statement. “For many, it has been a rite of passage to drive coast to coast to see what the different regions of the country contain.”

Alongside McNally’s is another exhibit in the hallway of the Fort Collins Museum of Art entitled “From the Heart:Land.” This collection of photographs is by photographer Chuck Kimmerle, who has depicted the relationship between man and nature in his newest exhibit. Working primarily in black and white. Kimmerle has captured the hauntingly beautiful silence and peace one can find in the plains of Western America.

Kimmerle credits his interest in photography to the moment he bought a Canon Canonet QL17 while in the Army. This led Kimmerle to have a successful 15-year stint as a photojournalist, including a Pulitzer nomination.

“My landscape work centers primarily around the intersections of where man and nature meet,” Kimmerle said in a statement. “I find that these areas, which seem to be a norm of our landscape, offer an insight and significance which I cannot find in nature alone.”

These two exhibits will be on display until March 18, 2018. More information can be found at moafc.org.