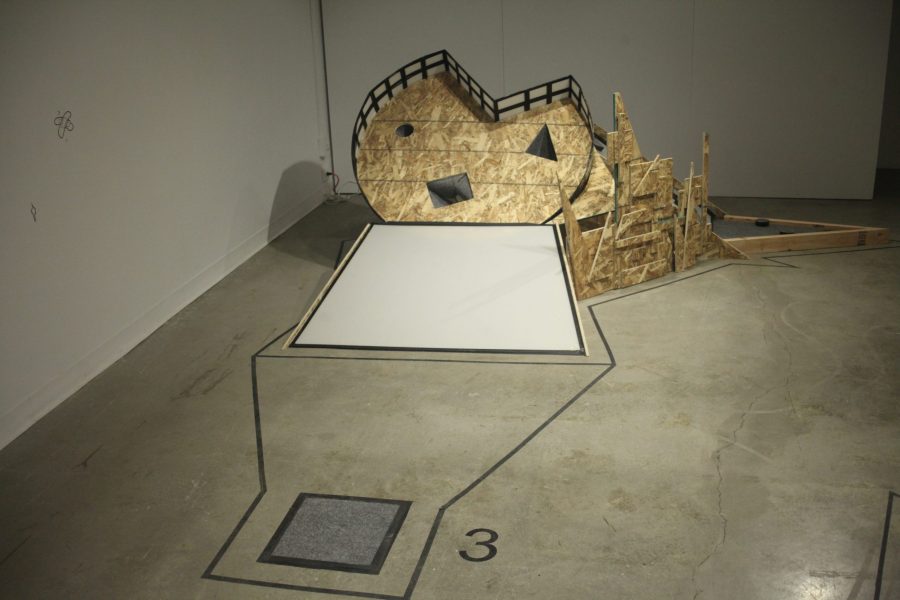 When over 30 art students gathered together in the art building, they were expecting to work on a multi-day collaborative art project. What they were not expecting was that they would be building an entire golf course in a matter of days.

Named “Mulligan,” the nine-hole golf course was built by the CSU Art Department in collaboration with Zero-Craft Corp. between Jan. 18 and 22. “Mulligan” references to a golf term, meaning to replay a stroke. Graduate student, Sonja Allen, said the project is meant to take Memphis and Kitsch styles and make them their own.

Zero-Craft Corp. is “a collaborative art and design practice,” according to company co-founder and CSU Assistant Professor, Mark Dineen. Dineen’s founded the company in collaboration with Michael Neville who also supervised the project. The company moves from organization to organization working on various collaborative projects. The construction of the project itself is performed by volunteers while Zero-Craft Corp. is responsible for the conceptualization.

Zero-Craft Corp. spent over a year conceptualizing and planning the project, according to Dineen. During this time, Dineen and Neville planned the schedule, what materials would be used and what forms would be included. Normally, booking a spot for the gallery would need to be done a year or two in advance; however, a small time window happened to open up and Zero-Craft Corp. was able to book it.

Dineen spread the word about the project through word-of-mouth and a few flyers hung in the art building. In the future, Dineen hopes to include students outside of the art major; however, for the first collaborative project, he wanted to make sure everyone had access to the wood-shop, which is only reserved for art majors.

Although the time constraint was somewhat necessary, Dineen said he would have condensed the construction length even if he had infinite time.

“The immediacy of the decision making makes better work,” Dineen said. “When people just sit around and pontificate on every little nuance of an idea, often times they kind of beat it to death.”

On Friday, Jan. 18, the 37 students met for a brief planning in which they were given a breakdown of the schedule. What they were building would not be revealed until the next morning.

The next morning, students arrived at 9 a.m. to begin the project. Here, they learned that they would be constructing a golf course with limited supplies in less than a week. They were then separated into groups led by graduate students. Every group was assigned a hole. They would then spend hours designing and critiquing each other’s layouts.

In terms of materials, students were given a kit containing a sheet of coroplast, a sheet of plywood, three 8 foot 2×4s, a strip of carpet and a few rolls of black tape, according to graduate student Adam Jones.

Students were allowed to be as creative as they wanted so long as their ideas fit within the project’s confinements. The confinements included not using materials outside of the ones given, making sure every hole was functional and exclusively using two out of three designated shapes per hole: circle, square and triangle. These rules allowed the holes to be different while still having an overall consistency, according to Dineen.

Friday was primarily dedicated to planning whereas most of the production occurred Saturday. During this time the groups scattered to various areas to work on their portion of the project. Although the project was initially intended to be a competition between groups, that idea was quickly abandoned to allow collaboration and unity between participants.

On Sunday, construction hit a speed bump due to an unanticipated snowstorm. Some of the volunteers were as far as Boulder making it difficult for them to make the commute. Groups of four were dwindled to two. However, the project continued.

By Monday morning, all of the holes were set up in the gallery and the leaders were putting the finishing touches on. Not only did the holes have to be set up, but the lighting had to be adjusted, the putters had to be constructed and the wall decals had to be placed. In the end, however, the project was completed before the deadline

Reflecting on her experience, Allen found the project to be a unifying experience.

Another graduate student who worked on the project was Adam Jones who agreed with Allen’s sentiment.

“I met so many people that I had never even seen in the art building before,” Jones said. “I got to know them and work with them. It was an honor.”

Aside from the life lessons learned, Jones said his favorite part of the project was attending the gallery opening Monday night.

“One of the biggest rewards and takeaways was going on Monday night to the gallery and seeing the show when it was up,” Jones said. “It was packed. There was music playing and people laughing.”

The project is currently located in the art building. It will remain there until Feb. 12.