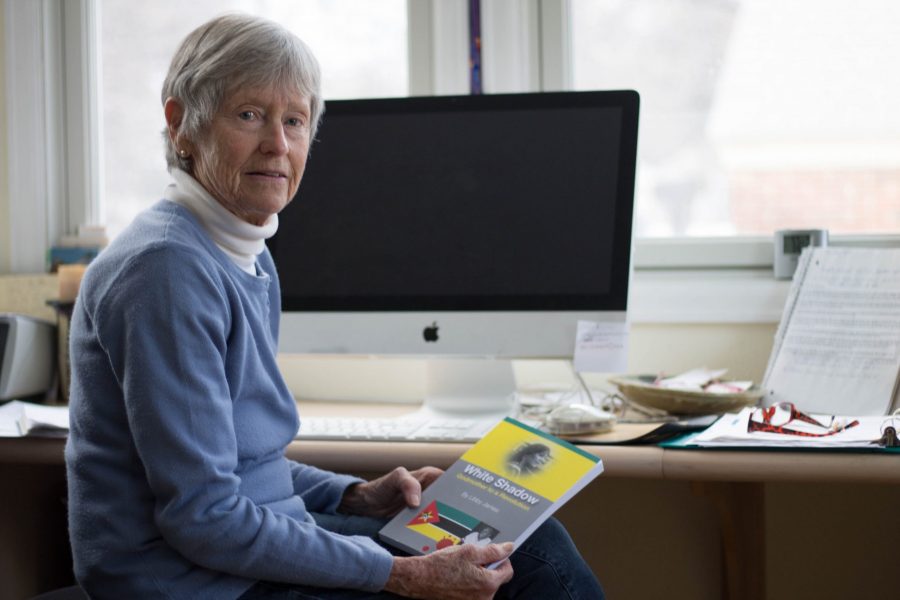 Libby James, an author and Colorado State University alumna, sits at her writing space with her historical novel, "White Shadow." The novel is based on her experiences in Africa. James is an author of three other books. (Seth Bodine | Collegian)

Colorado State University alumna Libby James published “White Shadow: Godmother to a Revolution” on Oct. 14, 2017. While it is a fiction novel, the story follows a real love story.

“Everything in here is true,” Libby James said. “There are some things that I added, but the whole story is true.”

The idea for the novel came to Libby James in 2004 while she was spending a year living with one of her four children in Mozambique. As a writer and freelance journalist, she created a way to keep working abroad. Libby James created a blog and made an effort to write a story for it every week called “Come to Africa With Me.”

“She usually writes about things that she does or experiences she has,” said Jeni James Arndt, Libby James’ daughter whom she stayed with in Mozambique.

While working on this blog, Libby James found something that really resonated with her.

“In the course of doing this research, I ran across the story of Janet Mondlane,” Libby James said. “It just really fascinated me.”

“It’s really been a long process for her,” said Kurt James. “I think she went through a lot of iterations and then finally came up with the final copy, which I luckily got to read before it went to be published. But I think it was just a very interesting story, and she wanted to tell it.”

Eduardo Mondlane, Janet’s love interest, was a political activist for Mozambique. The two’s story was true, but Libby James filled in some gaps.

“I think she filled in the parts that were kind of harder to understand,” Kurt James said. “Following a story that was true made it a good read. I think if she would have stayed non-fiction, it would have looked more like a term paper.”

This book takes place in the later half of the 20th century, just before Mozambique gained its independence in 1975.

“The history is so recent and so raw,” Libby James said.

This book includes the topic of prejudice, Libby James said.

“(Janet) had a very difficult time with prejudice in this country (U.S.) and then way later in her life when she finally moved to Mozambique,” Libby James said. “They (Mozambique) were suddenly independent and they didn’t want any white person messing with it.”

In America, Janet faced prejudice from her family. The family pressured the pair not to get married because they recognized the difficulties and challenges that would come with such a marriage in that time period, yet the family recognized that they couldn’t stop the love they shared.

A lot of the research for this book was practically handed to her, but not without its challenges, Libby James said.

“They wrote 7,000 letters, and Janet kept them and sent me them,” Libby James said. “That was a real gift to have. It was a gift, and it was tough at the same time, because you had to pick and choose.”

For other aspiring writers, Libby James encourages persistence and practice. She said although there is a wide range of resources available, she advises writers to not take in every piece of advice they receive.

Libby James loves writing because like Janet and Eduardo, everyone has a story.

“I think doing what we do is an opportunity to be nosy,” Libby James said.