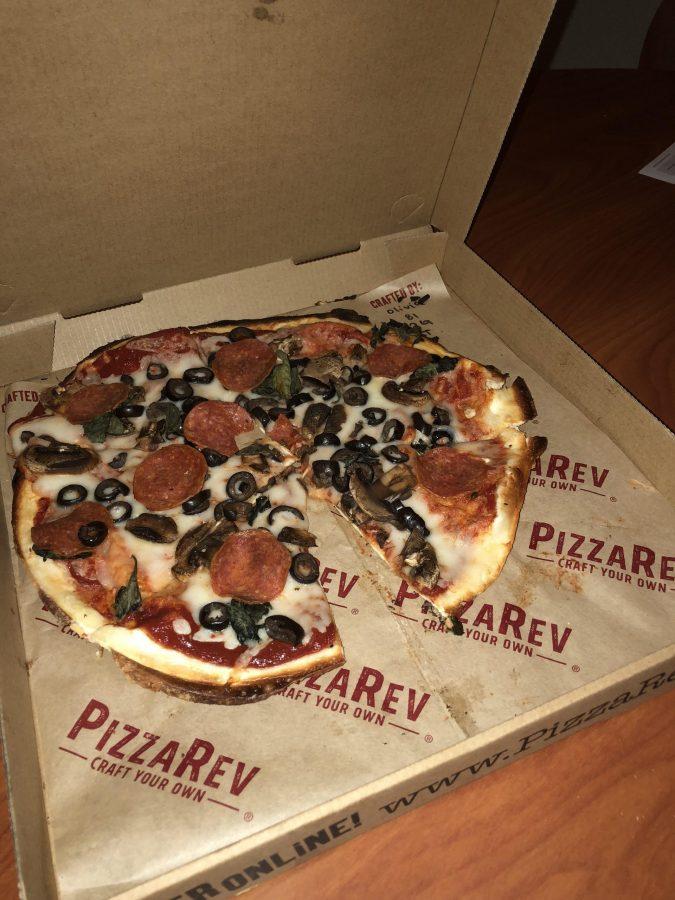 What does pizza mean to us as a society?

Is it simply a vessel to stuff as much bread, cheese and tomato sauce into our systems? Should we agonize over its presence in our weird little modern world? After all, there is more debate about pizza than ever before, thin crust versus deep dish and those lunatics who love pineapple on their pie versus the rest of normal society.

One thing’s for certain, Californians have no idea what they are doing when it comes to making a decent pie. Just call their cute little “creations” flatbreads instead of pizzas and see what they do. Denizens of L.A. will probably just think you are speaking “new age.” This has nothing to do with the review, but I needed to say it anyway.

So, here we are. PizzaRev is the latest pizza joint to enter the dough-filled ring of Fort Collins. The shop opened up on Laurel and College where Sienna Tan used to be. While I mourn the loss of tanning beds, I am continually satisfied by more pizza.

At PizzaRev you can get your pie a la mode and made in front of your very eyes just like at Subway or Qdoba. You can watch intently as every strand of mozzarella is dropped onto the dough.  Of course, you will probably note that this idea sounds a lot like Mod Pizza. That’s because you are right, it’s a lot like Mod Pizza. Actually, it’s the same idea.

In one way, this is the antithesis of what true New York pizza is, which is arguably what pizza should be. Once upon a time, you would walk up, slip a five-dollar bill in the window and, in exchange, you would be thrown a slice of pizza so large you would have to fold it and all the while dripping glorious grease onto the flimsy paper plate beneath.

My old-fashioned mindset is a bias, that is clear. It is why I approach new concepts in pizza with a lot of skepticism. After all, if ain’t broke don’t fix it.

On the other hand, nobody likes a pizza purist. We are not much fun at parties.

One thing that sets PizzaRev apart from its contemporaries is an impressive list of beers on tap that probably no one in Fort Collins will be interested in. I mean it is not like this town is nationally known for really enjoying beer or something. Good luck with that, guys.

But seriously, the whole beers-on-tap thing is a nice touch and the selection will hopefully bring in the beeriest of brew snobs. The taproom kind of ambiance works well and PizzaRev comes off like a decent place to hang with some friends and watch sports or something. Or whatever you and your friends like to do.

As for the pie, well, it’s pretty good. They are oven fired and ready in 3 to 5 minutes because I believe everyone can agree, that the worst part about pizza is waiting for someone to come bring it to you. This is especially true in a college town where long delivery times are a reality due to sheer demand.

I could make a joke about Colorado’s weed laws having an effect on this but I’ll just leave that to you.

Since the cook time is so brief, I noticed that my mozzarella was extra gooey. But truth be told, I kind of liked it. The edges of dough were nice and crisp and the center seemed a little doughier. Is this wrong? I dunno.

Again, I kind of liked it and we have established I’m a snob. Will you like this? That’s up to you.

I think the next concept in pizza should be chain restaurants that let you literally make your own pizza. Customers will be able to wear aprons, chef hats, toss their own dough and as they shout “Mama Mia” or any line they can remember from “The Sopranos.”

Collegian reporter James Wyatt can be reached at entertainment@collegian.com or Twitter @jameswill_I_am