OpenStage Theatre’s presentation of ‘The Crucible’ is amazingly terrifying 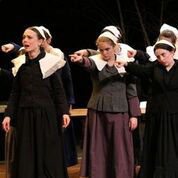 Fort Collins’ OpenStage Theatre is currently presenting the Tony winning play “The Crucible” written by Arthur Miller and directed by Peter Anthony, and it terrifies the audience with an amazing ensemble performance.

The play centers around the Salem Witch Trials that took place in 1692 in Salem, Massachusetts. John Procter finds himself lusted after by Abigail Williams, a local girl who worked in his home.  Williams and a group of other girls from the village are caught by Reverend Samuel Parris dancing in the woods with a slave named Tituba. They are thought to have been summing the devil that night and when Rev. Parris’ daughter Betty suddenly falls ill those thoughts are confirmed.

The play was great. Each character had clear emotions and drive that connected with the audience. Teal Jandrain, who plays Abigail Williams, is fantastic to watch. Her performance was haunting and brilliant. She had no fear in playing the obsessed Williams and in each scene commanded the stage.

Her band of female witches followed her act very well. They worked in perfect tandem to create the illusion of possession. The movements during Act 2 Scene 2 were mesmerizing, and I couldn’t take my eyes off of Jandrain as she claimed to hear the devil speak.

The music was in a word, creepy. Anthony used moans and different stylized sounds to create a very terrifying ambiance during scene changes. The music played well with the content of the show, set design and costume design.

The set was a mixture of control and chaos. Large wooden beams stick out from the rafters and seem to be attempting to cage in the woods that surround the rest of the stage. It reflects what the ministers were trying to do to the women or “witches,” as they call them, of the town. The costumes were period pieces and each group seemed to have a similar theme to their clothes. The farmers wore leather, the ministers black, and the women all wore very similar styled dresses a great example of the oppression of women during this time period.

Timothy Ackerman, who plays John Proctor, also stood out in the show. He was not afraid to show the true emotion behind Procter’s character. The anguish and guilt was clearly present and the deterioration of Proctor was done to perfection. Ackerman was brilliant in the role. I loved watching the relationship between Procter and Williams which was clearly driven by lust and desire denied, of course, by Procter. Then to watch Procter’s relationship with his wife Elizabeth, played by Corinne Wieben, which is loving but broken.  The two foil each other well as do the performances of Jandrain and Wieben.

The play was long around 3 hours for the entire performance and intermission. There were a few moments where I started to lose track of what was happening especially when the action on stage

was mostly dedicated to dialogue. But being a fan of Miller, I was hooked from the beginning and was excited to see what happened.  The whole ensemble worked very well together and moved as a unit which is important when performing such a complex show.

Overall, I was very impressed with the level of talent and skill within the production. Each character was well thought out and it was amazing to watch the women on stage move and speak in unison. By the end I had goose bumps all over my arms.  I would definitely recommend going and seeing the show.

“The Crucible” will run until February 17 and the Lincoln Center.

Tickets can be purchased online at: tickets.lctix.com

Collegian reporter Claire Oliver can be reached at entertainment@collegian.com or on Twitter @claire_oliver21