Front Range may gain passenger trains; are students on board? 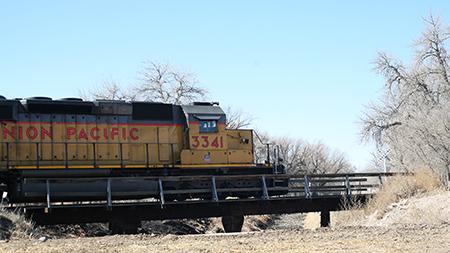 A train barrels through Fort Collins along College Avenue around noon on Thursday. There is a debate in Fort Collins whether or not to restrict trains from blowing their horns through the middle of town.

Sometimes getting to Denver can seem like an odyssey. Perhaps you do not have a car. Perhaps bus times do not mesh with your schedule. Maybe you need to get to DIA or take in a comedian after a week of stress.

Changes may be impending, although they may take years to implement.

In recent months, improved transportation along the Front Range has been a topic of conversation at the state level and in the impending gubernatorial race. Among the various proposals being disseminated are expanded bus access statewide and a passenger line that would travel from Fort Collins to Trinidad. The latter reflects proposals drawn up by the Southwest Chief and Front Range Passenger Commission, which was created by the Colorado General Assembly in the last legislative session. While the conversation centers around the impact on the Front Range and statewide, how would the CSU community benefit? What might the broader ramifications be?

“Having something going to Denver on a constant basis, especially a train, would be helpful,” said Jordan Crowther, a freshman fish, wildlife and conservation biology major. Crowther also said such improvements could benefit students from out of state.

Crowther thinks the train is the most effective mode of transportation for the Front Range.

Crowther added that to be a student without a car was like “being stranded in a bubble.”

At the present, CSU students can travel to Denver by bus. Options include Bustang or Greyhound. In addition, riders can also take Transfort’s FLEX Route to Longmont and transfer to the Regional Transportation District bus to Denver. Shuttles to DIA are also offered.

The Southwest Chief and Front Range Passenger Commission has requested $8.7 million from the legislature. The funds would go toward soliciting public input. The commission would seek feedback regarding potential routes, station locations, as well as types of trains. According to the commission, it could take between seven to 15 years before trains could be making their way along the Front Range.

For Lorena Mancilla, a senior Spanish major, the prospect of the train has personal benefits.

“If  it is attainable, it will help me go home instead of driving on I-25,” Mancilla said. Mancilla, who is from Colorado Springs, added that it will help other students do likewise.

Grace Morgan is a freshman nutrition major. She had not heard much about the potential project, but called the train “a good opportunity.”

Morgan said there are many resources in Denver for students, such as conferences and other events.

“It is a way for them to access those resources,” Morgan said.

“It is a good way to keep Fort Collins, Denver and Colorado connected,” Morgan said.

Morgan said she would personally visit Denver more if the train were implemented.

But what about the disadvantages? The cost would be a downside, even though it would be worth it, according to Crowther.

“More trains going through town,” Mancilla said. “Just hope you do not have to go to the hospital when the train is going by.”

“More trains going through town. Just hope you do not have to go to the hospital when the train is going by.”

Colorado’s infrastructure is paid for by a gasoline tax. The tax has remained constant since 1992. As a result, the Colorado Department of Transportation has a yearly shortfall of approximately $1 billion per annum.