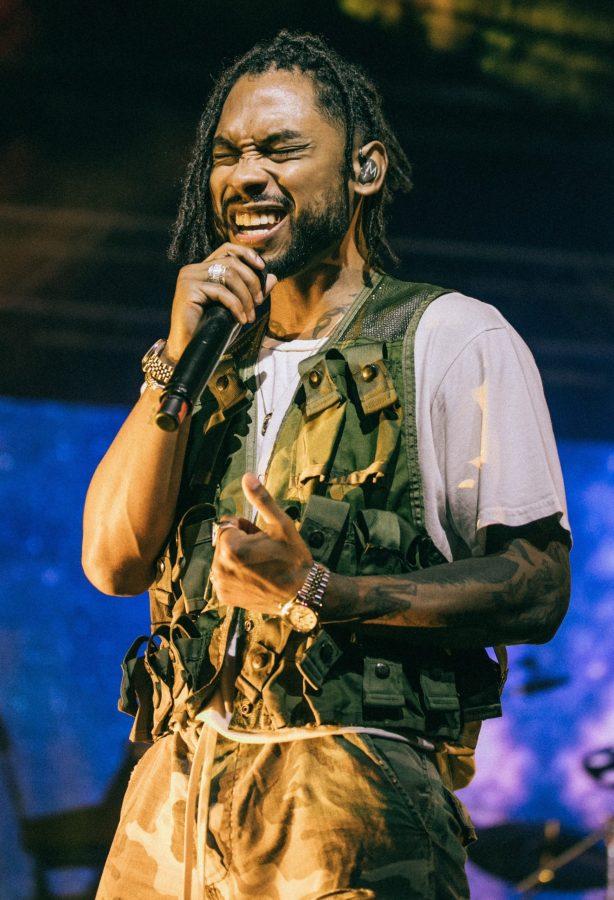 Before I say anything about this album, I need to talk about Miguel and white pants.

How does that have anything to do with this review? I’m not really sure, but I need to talk about when I saw Miguel at Bonnaroo in the summer of 2016 and how the R&B singer made me make an exception to my rule that white pants are not OK to wear.

Well let me tell you, Miguel can wear white pants, and so he did when he performed a godly set in the middle of the night in Manchester, Tennessee. I was probably a football field length—that’s, like, 100 yards—away from the stage. Miguel kept a packed house as he grooved on stage for nearly two hours. I had lost my friends, but that didn’t matter because they missed out.

Miguel’s image and stage presence can be summed up in probably one word: sexy. There’s just something about him that screams he can do sex, like, really good. Watching him live and listening to his 2015 release, Wildheart, only solidified that to me.

For the un-initiated, Miguel’s sex appeal can be traced back to his first release: All I Want is You, which came out in 2010. However, Miguel isn’t just the pretty face his image makes him out to be. The singer, actor and producer has a slew of writing credits for big-name artists and actually began his music career in 2000 at the age of 13.

The year is 2017 and Miguel’s newest album, “War & Leisure,” decries that there’s a “war on love.” It is his most political album to date and Miguel is still able to make it sexy—like there was any doubt.

The album opens up with the song, “Criminal.” Miguel lets the listener knows he is unstable and that it is “criminal how he keeps killing you (us).” The drums and guitar are a little reminiscent of a Tame Impala song. I wouldn’t complain if Miguel replaced Kevin Parker as the lead singer. It’s a hot take, I know.

Rick Ross is featured on the song, but I have to dock him points for not letting out his iconic grunt when he hops on the track. Besides that, the verse is OK. It is not Rick Ross’ best, but not his worst either as the rapper manages to make note of some hot-button issues surrounding Black Lives Matter and Colin Kaepernick.

The song “Banana Clip” has remained a favorite of mine from the first listen. This song funks. Miguel also might be foreshadowing the future as he references “Korean missiles flying through the air” and how he has a MI6 on his lap, but it is apparently used for love. Is Miguel talking about his penis here? That’s up to you.

Another highlight of the album is the song “Carmelo Duro” that is sung primarily in Spanish and was inspired by Miguel’s trip to his father’s hometown in Mexico. In an interview with Billboard, Miguel described it as the “quintessential Miguel song, but in Spanish.” That definitely checks out. It also features up-and-comer, Colombian-American artist, Kali Uchis, but only as background vocals. This is unforgiveable, as she definitely needs a verse here.

The last song on the album, titled “Now,” is particularly poignant as Miguel takes aim at the “CEO of the free world.” You can probably guess whom the singer is referring to as he mentions him building walls “up high and wide.” The song is the latest one off the album to receive a music video as it focuses on Miguel’s visit to the Adelanto High Desert Detention Center, which is the largest immigrant prison in California, housing over 2,000 family members from Mexico, Haiti and Central America.

In the video, Miguel performs a touching rendition of the song at a political rally calling for justice.

In a year when the sheer mention of race carries political polarization, Miguel is more focused on change than ever. “War & Leisure” paints a picture of an apocalyptic future if the world continues down the road it is currently on. It’s why the singer empathizes the power of change and presence of mind in the last few minutes of the album.

Should you listen? Yes!