Saints Of Never After brings hardcore to everyone 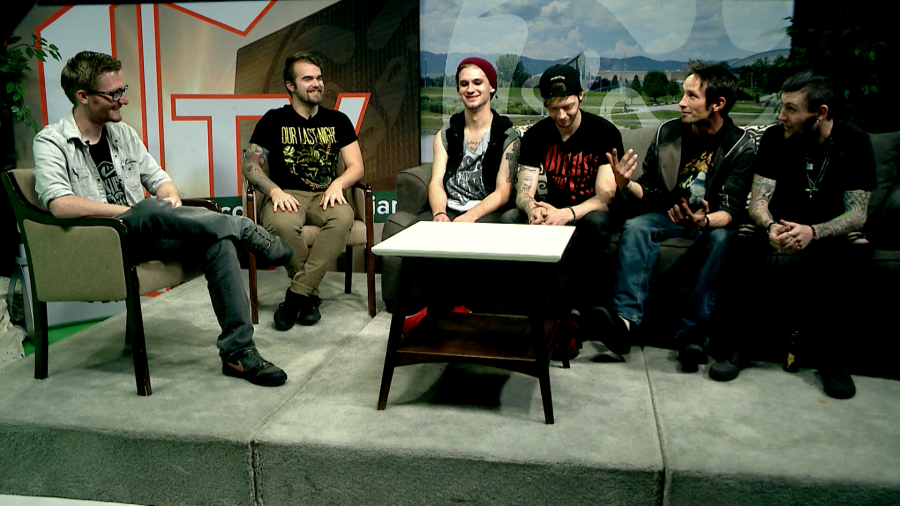 Saints Of Never After sit down to talk about how they formed, their style and some of their favorite memories live. (Alec Erickson | Collegian)

Loud music, high energy and camaraderie makes up Saints Of Never After.

Saints Of Never After has been one local band making waves in recent years.

It all started with a simple Craigslist post by lead vocalist Brian Robertson. After moving to Colorado from Arizona, Robertson looked to start a new band, and one of the first to respond to the posting was drummer and vocalist Brenden Tharp. After sitting down at an I-Hop, the two had formed the Saints Of Never After.

Eventually, bassist Jordan Persons also responded to the add, and the lineup was rounded out once guitarists Drew Claus and Nick Erben joined the band. The benefit that the band has found with a larger lineup is that they all have multiple influences that they bring into their own music.

The band has a blend of hardcore and pop-punk elements in their music. Fast guitar playing and fast bass playing is something the band feels is important to their music.

“No song sounds the same in the end” Persons said. “Everybody has personal taste combined.”

The band’s style of bringing together their influences and backgrounds in music is reflected in the band’s first extended play, “Tentative.” The record focuses on more fast-paced rhythms and catchy melodies.

Saints Of Never After is always willing to challenge themselves musically.

“What got me into music was punk music” Erben said. “After playing guitar for a couple of years, you kind of want to challenge yourself more than punk music and simple power chords.”

This mentality is reflected in a lot of the band’s music, from rhythm guitar taking the lead on a lot of tracks to these larger than life breakdowns and guitar solos that accompany others. While the band has never had a label necessarily stuck to them, it is a blend of everything.

“There is something for everybody,” Tharp said.

When it came down to recording “Tentative,” the band seemed a little lost.

“Drew had to step away from the band for that record,” Robertson said. “I think ‘Locked Away’ is the hidden gem for a lot of people.”

The band has always found a way with pulling from their real-world experiences to their music. “Locked Away” was inspired at least for the title when Persons’ ex-girlfriend was arrested for breaking into his home.

For a large group such as Saints Of Never After, the band is able to bring in a lot of elements from a lot of different experiences into what they write. Robertson, being from Arizona, is inspired by a lot more of his pop-punk roots while Claus is more inspired by hair-metal upbringing. The fact that most this band is comprised of a lot of guys who come from all walks of life plays a key factor in the music that they write.

With how much work that goes into the production of their music, the same amount, if not more, so goes into performing live.

“If I am not out of breath in the first minute, I am doing something wrong,” Robertson said. “That’s our goal; it’s a production, a show.”

Persons said they put a emphasis on making it a big production.

“We love what we do, and we want to see everybody move and enjoy our music,” Persons said.

From the mosh pits to those that prefer to sit in the back, Saints Of Never After is always willing to engage with their audience at a show no matter what. This is a band that started out playing their first show at The Whiskey in Fort Collins. They now perform on main stages at The Aggie Theatre and The Summit Music Hall.

As for the near future, the band is currently gearing up to head to their studio to work on their next project. While they are torn about making a couple of concept EPs or just doing a full-length, the band is excited about what they have in store for the future. The band is reworking some of their first demo songs for the upcoming project as well as adding some new tracks to support it. The band is excited for the future but is willing to give a throwback to the fans that have been around since the beginning.