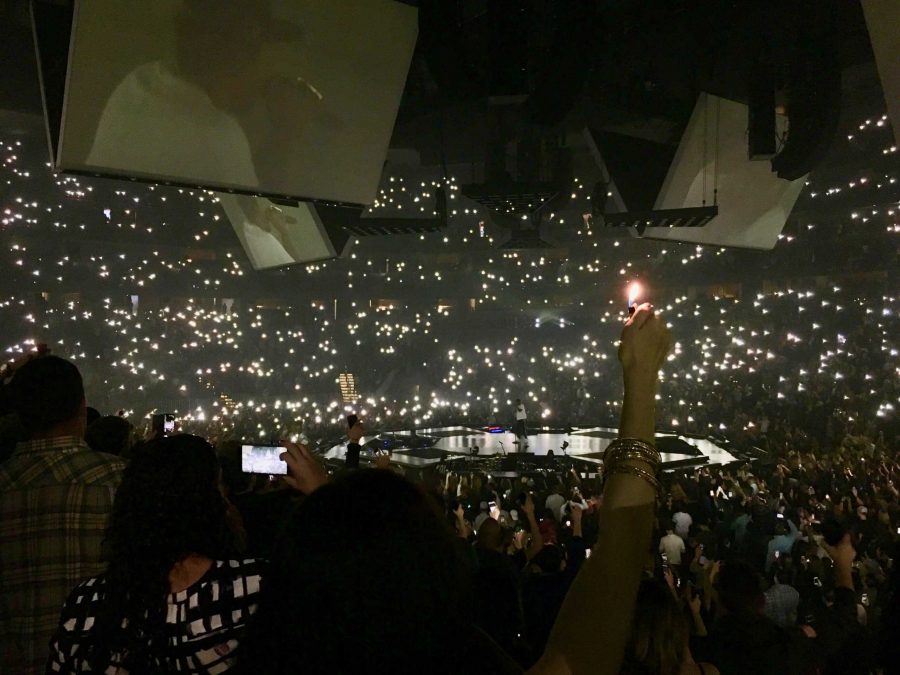 He has 99 problems, but performing is not one.

On Sunday evening, thousands of fans gathered together at the Pepsi Center for the Jay Z 4:44 tour. Jay Z’s ten track album was released on June 30, and he began touring on Oct. 27. The concert started at 8 p.m. with Vic Mensa as the opener. Jay Z performed songs for his new album as well as many of his older tracks, such as “99 Problems” and “Dirt Off Your Shoulder.”

During the show, four sets of screen pairs moved and rotated while projecting what was happening on stage as well as video clips of Jay Z’s personal life. With each different song tempo, a beam of lights, either green, red or white, flashed around. Jay Z interacted with the audience, asking them if they were ready for the show or to clap along to a song. Audience members interacted with Jay by jumping around and completing a lyric within a song.

The stage had four pits, evenly spaced out. Within the pits, were crew members at Jay Z’s disposal if he needed anything during the show. Two drummers and other sound crew members accompanied Jay Z during his performances, and a film crew would capture what was projected on the screens.

There were points of the show where Jay Z talked to his audience, telling them about a particular song or bringing up topics of today’s world.

“This was the most difficult song I wrote,” Jay Z said right before performing “Legacy,” a song portraying Jay Z’s life and his upbringing.

Jay Z brought up the topic of inequality right before performing “Hard Knock Life” and “The Story of O.J.” He informed those who discriminated against based off their race/ethnicity, gender or sexual orientation not to give up.

“If you want to make it in this world, it has to come from you,” Jay Z said.

Jay Z ended the concert with a contribute to Chester Bennington, former Linkin Park band member. As the lights lowered, audience members filled the Pepsi Center with lights either from the phones or lighters as Jay Z performed “Numb/Encore.”

Jay Z’s next tour stop is Texas. The last date of the tour is Dec. 21 in California.

Collegian reporter Yvette Redwood can be reached at entertainment@collegian.com or on Twitter @yvette_redwood