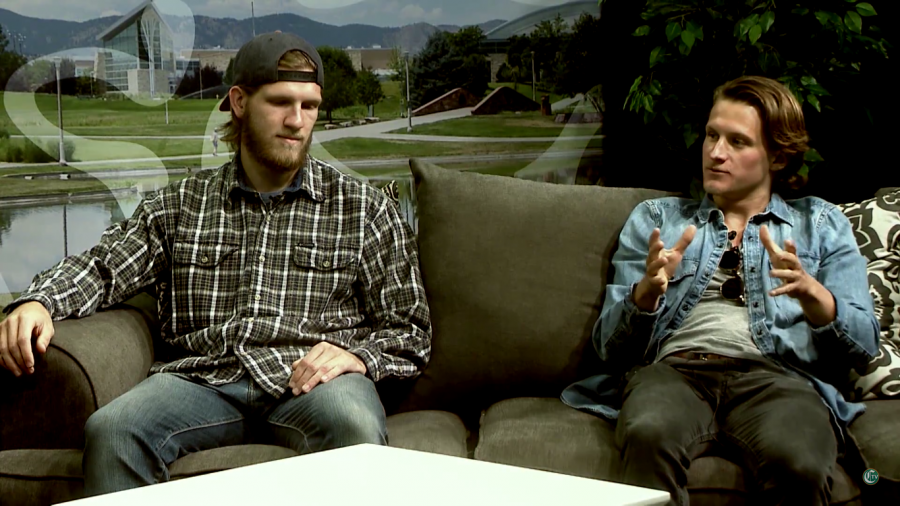 Austin Seifert and Alex Van Keulen of Glass Cases sot dpwn to talk about their style, breaking into the scene and recording a new album. (Alec Erickson | Collegian)

Fort Collins is starting grow into a music scene.

It is a slow process, but for the people who live in northern Colorado, it gives us a chance to hear many young and inspired musicians and have an opportunity to support them. One such outfit is just starting to break into the scene after releasing their first album and are out to make a name for themselves. Glass Cases are not your average alternative band: They are just one local band out to change the Fort Collins music scene.

Forming a band was something the group never expected to happen; they started out as a side project for a couple of friends. Austin Seifert and Alex Van Keulen shared a passion for playing music, and once they started to play together things began to happen very quickly for the group. Before long, Van Keulen’s brother was added on drums and the first album was recorded.

When it comes to new bands and records in general, there is almost identity crisis moment, when the band, fans and anyone else listening are trying to figure out just what the sound and identity of the band are. When it came to their self-titled debut, it was more of a test for them on the different styles and sounds to play with.

“We have a Glass Cases sound that we have come to, and the first album hits on it but it’s definitely a test run for us,” said lead vocalist Van Keulen.

When it comes to working on improving what they have already, the band admits that they already have a few more refined songs done.

As for the songs, the band has already released, Seifert and Van Keulen share songwriting responsibilities, and it reflects in their work. Many of Seifert’s songs are based on personal experiences.

“I wrote in the past, even before this band came together, so it’s off old experiences and newer ones,” Seifert said.

Glass Cases first album was more of collective of songs written throughout years for the musicians.

“We both have different styles of writing,” Seifert said. “But the stuff we write about are kind of similar.”

This is something that allows the duo to bounce ideas off one another, whether it be from lyrics to one of the several instruments that they both play.

Glass Cases just picked up a new drummer a few months ago.  There is a lot of excitement surrounding getting the full band out into Fort Collins scene.

“My main nerves are getting the technology out of the way,” Van Keulen said. “Once you’re up there you kind of lose yourself for a little bit.”

The band is opening for Seth Glier at the Downtown Artery on Thursday, Nov. 2. Up to this point the band has been used to setting everything up on their own, but now get to work on setting up on a different local stage.

Glass Cases are already in the swing of things for the music they bring to the stage and they already have found a setlist that seems to work for them.

“We kick it off with ‘Addiction,’” Van Keulen said. “It just really sets the mood early.”

The band already has a good grasp on what songs that they can really get into and what they think that audience members will enjoy as well. “Addiction” is one of the band’s favorite songs and a fan favorite.

Looking towards the future, the band is looking to get their second album professionally recorded. After self-releasing their debut, the band says it takes a lot of time away from playing your own music.

“There was a big learning curve,” Van Keulen said. “You can be a musician, but the actual engineering, mastering and all of that is something we had to learn.”

This means the band is going to take their time recording their next album because there was such a rush to release the first.

“We know we haven’t put out our best yet,” Van Keulen said.

Glass Cases have a lot in store for the future. From entering The Scene music contest, to getting another show at Avogadro’s Number in January and recording their next album, they are hard at work. The band may be new, but sometimes it takes a new idea to make a big change

Glass Cases is opening for Seth Glier at the Downtown Artery on Thursday, Nov. 2.