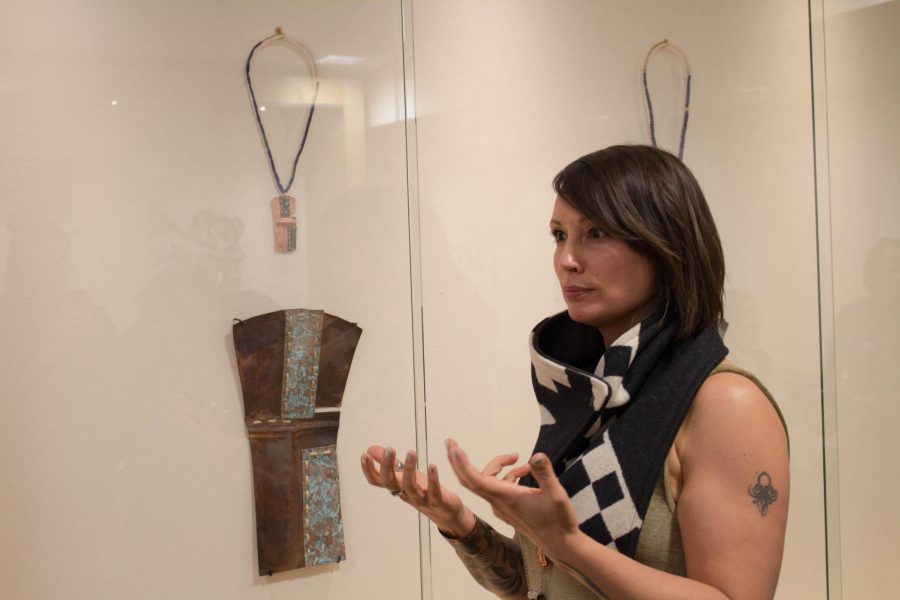 The newest exhibit in the Duhesa Gallery is open, celebrating Native American culture and women.

This exhibit is titled “Aasgutuú Ádi,” which translates to “Forest Creatures” in the Tlingit language. It features art by three different women: Crystal Worl, Jennifer Younger and Alison Marks. They are all Tlingit and from Alaska.

“The title is not to say we are forest creatures, because we’re not,” Worl said. “Humans and the forest creatures, we’re considered separate things. But it’s the relationship that we have with each other that connects us, and you can see that in the work.”

All of the artists featured in this exhibit are women, and that is no accident.

“A lot of our world is teaching young women to be competitive with each other,” Worl said. “It’s about success is getting attention for sexualizing our bodies and romanticising our own culture. And when I talk to the real women, like me, that are doing and creating incredible art, we’re nothing like that. That doesn’t represent us in the least.”

This gallery serves as a learning opportunity for everyone in the community, both those who identify as a Native American and those who do not.

“Having this gallery show different art forms from different Native cultures from throughout the U.S.,” Younger said. “It educates one Native about another and non-Natives about the variety.”

“Having this gallery show different art forms from different Native cultures from throughout the U.S. It educates one Native about another and non-Natives about the variety.”- Jennifer Younger

It serves as a source of education and a place for inspiration as well.

“Personally, having the Duhesa Gallery here, when I come in in the morning and I’m not in the best mood, when I enter this space, it always like lifts me up when I look at all this artwork,” said Ty Smith, director of the Native American Cultural Center at a talk given at the exhibit opening on Nov. 7.

“It’s so great that CSU has a gallery for contemporary native art,” Moore said.

“They’re both tribes in Alaska, but they are very different,” Worl said. “There are stories of trade. We traded design. We traded art, songs, stories, dances. My art is a collaboration of Tlingit formline design and Athabascan bead work pattern. I look for ways where they can merge and be unified all while I’m simultaneously modernizing traditional design.”

The identity of being Native American is present in this exhibit.

“In Tlingit kinship, we identify as two moieties; you’re either born Raven or Eagle,” Worl said. “It’s matrilineal, so if you’re mother’s Raven, you’re born to be Raven.”

Much of her work featured include Raven elements.

This exhibit has been years in the making as an opportunity for these women to show their work and experiences.

“This is the beginning of something that I started talking about two years ago,” Worl said in a talk given at the opening. “It’s really incredible to see it come to life and have you all here. It really validates our hard work.”