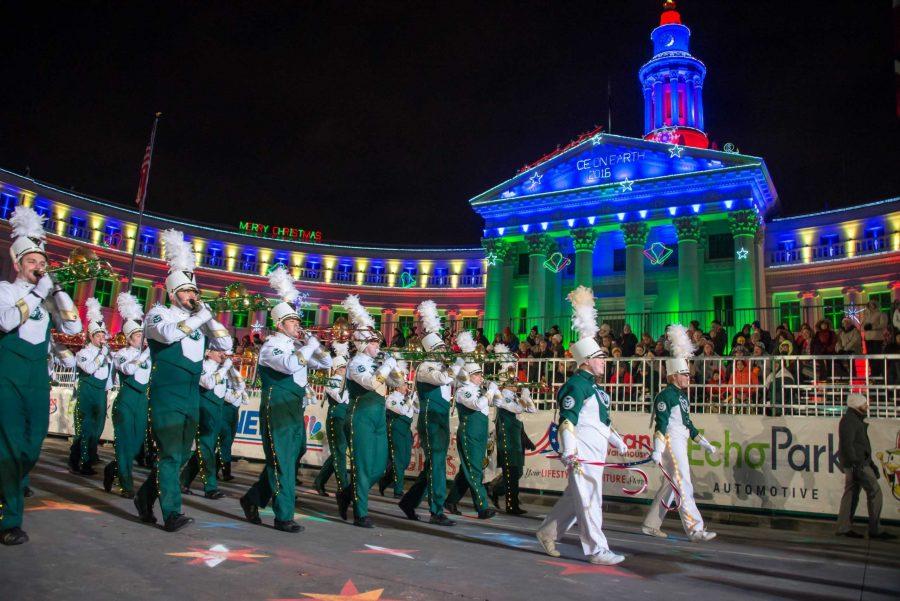 The turkey is away and the holiday cheer is here.

The Colorado State University Marching Band will return to the streets of Denver to lead the 43rd annual 9News Parade of Lights. The parade will begin at 8 p.m. at the Denver Civic Center.

CSU’s 265 musicians, the colorguard, the Golden Poms, CSU Cheer and Cam the Ram will be performing with numerous floats and balloons at the parade. CSU will be the only collegiate marching band in the parade, said Director of Marketing for the University Center of the Arts, Jennifer Clary, in a press release.

The band will be in the parade on Dec 1. only and will stop in front of the CSU Denver Center on 475 17th Street. They will hold a reception for alumni and Ram fans when they will perform the CSU fight song. Tickets for the reception can be purchased online at the Alumni Association page. Association members are $10; non-members are $15 and children 12 and under are free.

Before they head to Denver, the CSU band will be hosting a performance in the neighborhoods of Fort Collins on Nov. 30 at 6 p.m. The band will be going around the University Center of the Arts building, located on Remington Street. According to band director Richard Frey, the band will being on the south side of the UCA and will march counter-clockwise, ending in front of the UCA.

“Some people start with us and walk on the sidewalks, so people simply watch us go,” Frey said. “The biggest crowd always ends up being at the front of the UCA, where we’ll stop and play the parade tune one last time.”

Following the parade, the band will be performing at the 2017 Holiday Spectacular Concert at 7 p.m. in the Griffin Lobby. According Frey, performing in these parades allows the band to give back to community and represent CSU as a whole.

“The preview is an opportunity for us to give a small ‘thank you’ to our neighbor and the community in Fort Collins,” Frey said. “It is a terrific opportunity to represent CSU and bring the holiday spirit to hundreds of thousands of people both live and via the TV broadcast.

Tickets for the concert can be purchased online at the University Center of the Art ticket office website. Student tickets are not available for this concert, however, students could attend an open dress rehearsal for free with their student ID. Alumni members can be treated to a free hot drink provided by Human Bean Coffee Truck by showing their membership card.

Where: The parade starts the Denver Civic Center

Collegian reporter Yvette Redwood can be reached at entertainment@collegian.com or on Twitter @yvette_redwood