Alec Reviews Music: Walk The Moon’s latest crossover ‘What If Nothing’ is a mixed bag 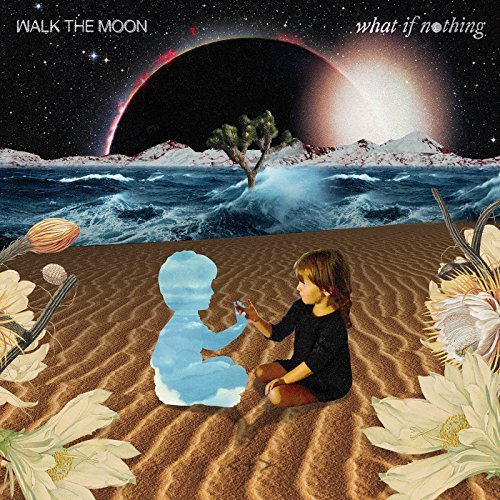 What if you attempt to create another chart-topping record?

The answer may be harder than you think, seeing as how Walk The Moon stumbled upon that attempt with their sophomore release of “Talking is Hard.” Their third release, while it does have some fun and engaging tracks, is disorientated and confused in style and the lack of identity is more detrimental to the album than one might initially assume. “What If Nothing” is energetic and engaging, but you really must work through it to find something to enjoy.

The Cincinnati, Ohio-based group have changed a lot over the years. Starting back in 2008, the group would start to experiment a lot with their style, something they still do. Once the group released the track “Anna Sun,” they started gaining a lot of popularity really quickly. The group’s self-titled debut album came out in 2012. The group had already gained a following back in 2010 with their self-released “i want! i want!” The band really found success with a few of their singles like “Anna Sun” and “Tightrope,” which built up a lot of hype for their sophomore release “Talking is Hard,” which had “Shut Up and Dance” peak at number one of the Billboard Alternative charts. While the band did have some lineup changes early one in their life, they have found some consistency with Nicholas Petricca, Kevin Ray, Sean Waugaman and Eli Maiman. From their self-titled to their now third studio album, the band has been constantly shaking things up and experimenting with their sound. Usually this works, however there are just a few times on “What If Nothing” when it falls flat on its face.

“What If Nothing” is a 13-track record that clocks in at around 56 minutes in length. Right off the bat, you can hear how drastically Walk The Moon are shifting away from “Talking is Hard.” The shift is not necessarily bad. Many times tracks are layered throughout this whole record to be a lot of fun regardless. The downside is that sometimes they are a bit shallow and lifeless. When you listen to the whole record, you begin to question the singles that the band went with. “What If Nothing” at times becomes clunky, and this is more of a result of the two producing styles on it.

Musically, we see Walk The Moon embrace more of a stadium rock vibe on this record, something that is designed to get people moving and singing along. For this to succeed they need more simple mixes and layers that do not necessarily deter from the rest of the record, and that is exactly where tracks like “One Foot” and “All Night” come in. Then you listen to something like “Kamikaze,” which has a more synthetic driving force that is reminiscent of past generation and is paced in a more scripted and expected way. Where this record really begins to have fun is when tracks you do not really expect to do much begin to progress into something that is bigger than life. Tracks like “Surrender” and “Feels Good to be High” are some of the pinnacle experimental rock tracks that “What If Nothing” offers to listeners. These two tracks alone show how much Walk The Moon have changed in the last few years since their last release and how they know just exactly what makes an engaging song.

Lyrically, Walk The Moon have always been more experimental and out there with their song writing, but this is where we start to see how clunky and messy it can be when things do not work out well. “Headphones” is a great track with how it is structured, but its metaphor is weak and awkward in places and does not necessarily do a whole lot to support the record as a whole. Then you listen to something like “Sounds of Awakening,” which is very Phil Collins inspired, and the lyrics are trying to be a lot more meaningful and deep than they appear to be, a trait shared by much of this record. When things are simplified like on “Press Restart” and “Can’t Sleep (Wolves),” it works more in the favor of fans, as it is easy to get lost in the track and not worry too much about what might be going over your head. Walk The Moon have made another enjoyable record. Their songwriting just has not fully found its voice in a lot of places.

Should you listen to it? Maybe

“What If Nothing” is an interesting record in that there are some hidden gems that are actually really fun to listen to. The few singles off this record are actually more off putting than the record itself and fans will be in for something they may not be used to with Walk The Moon. The band is constantly experimenting and changing things up, which is a good thing that they don’t necessarily need to worry about the sophomore slump anymore.

In addition to charting here in the states, “Shut Up and Dance” peaked in countries like Poland, Australia, Canada, Germany and more.
The band’s name comes from The Police song “Walking on the Moon.”
The group won Top Radio Song and Top Rock Song at the Billboard Music Awards in 2016 for “Shut Up and Dance.”