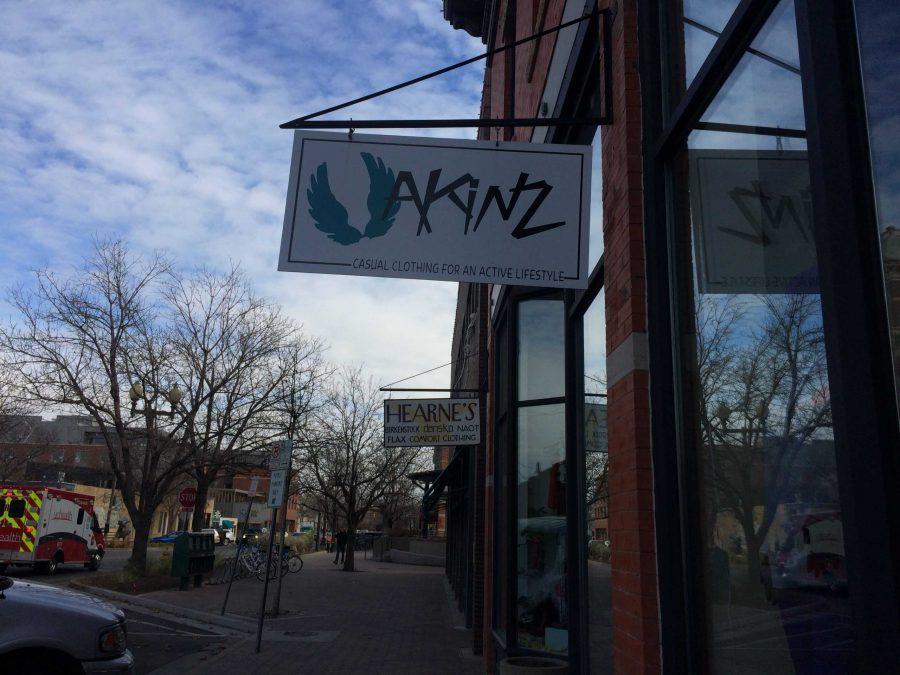 Leggings have become a common sight in a world, balancing comfort with fashion; but leggings sold at Akinz are made of no ordinary material: water bottles.

Suzanne Akin started her brand in 2005 before she opened her store. She worked on her brand while traveling; this was limited to design.

According to Akin, she opened her workshop for the first time in 2010, which marked her grand entrance into the printing world. Two years later, Akin officially opened her store.

Akinz makes all their products in house, except for some of the sublimated leggings which are made by Hookfish, a company based out of Denver.

The leggings made in Denver include: Colorado Flag, Into the Woods, Aurora, Northern Lights, Fly away and Peachy Pineapple.

Akin’s mother is a retired art teacher, currently working at an art gallery.

Akin said the Aurora leggings, launched over the summer, were extremely popular.

“They’ve gone over well so far.” Akin said.  “I’m kind of excited to expand it a little bit more next year.”

Akin plans on expanding the Aurora leggings by offering flared-leggings made out of the water bottle material. Also, the store plans on branching out to capris and possibly sports tops.

Akin has a few designs she’s working on and hopes to sublimate onto the water bottle fabric.

“If I can get them done in time to have them for the holidays, we could have them pretty quick,” Akin said. “Otherwise, we might wait until March.”

According to Akin, to make the water bottle legging fabric the company Akin buys from melts down the bottle into a fiber.

“They spin it like it’s any other textile, into a thread,” Akins said. “They also have spandex in them, they are not 100 percent water bottles.”

The fabric then goes to sublimation printing. The ink used to design the fabric turns into a gas, at high heat, during this process, Akin said.

“It injects it into the fabric,” Akin said. “So, it’s a really long lasting printing process. You can also get super bright colors.”

The screen printing Akinz does in house uses spot colors, meaning they can only use one color per screen. With sublimation, they can use more colors, Akin said.

“You have a lot more freedom with designs and stuff, which is fun,” Akin said.

The other leggings sold consist of a mainly polyester-spandex or a cotton-spandex combination.

Akin draws all the prints herself, which are then sublimated onto the fabric.

“So, we are making apparel in America, which is once upon a time a dying breed and making a bit of a comeback,” Huebner said.

According to Huebner, sublimation uses special ink and paper and the fabric used in sublimation needs to be at least 50 percent polyester. To sublimate, the fabric must be heated, pressed and cooked for an amount of time.

Hookfish can run a project from conceptualization through production and the project will never leave the facility.

“Dye sublimation is unique to begin with,” Huebner said. “Being good at it is super unique, and then being able to run manufacturing from start to finish is further unique.”

According to Huebner, in Colorado, there are about only three companies that do what Hookfish does under one roof.

According to Huebner, Akin works with two companies to make the Aurora leggings, Hookfish, who sublimates the fabric, and a company based out of Taiwan and L.A. that makes the water bottle fabric.

Emma Payton, the assistant store manager, has worked in retail for about 10 years.

Payton likes that she can be creative at work by knitting, coloring and sewing.

Payton said she gets to meet and talk to really interesting people at her job.

“I love being able to show off Fort Collins and tell people the fun places to go that might be a little less touristy,” Payton said.

Not only are the leggings environmentally friendly, half of Akinz sweatshirts are eco-fleece which is made from recycled and organic fibers.

“They are super soft,” Akin said.

Akin said there is always more you can do for the environment. For instance, Akinz makes almost everything in house, and gets their yarn from New Jersey and Canada.

“Anything we don’t make is pretty much made in the USA,” Akin said. “Just reducing our carbon footprint goes a long way.”