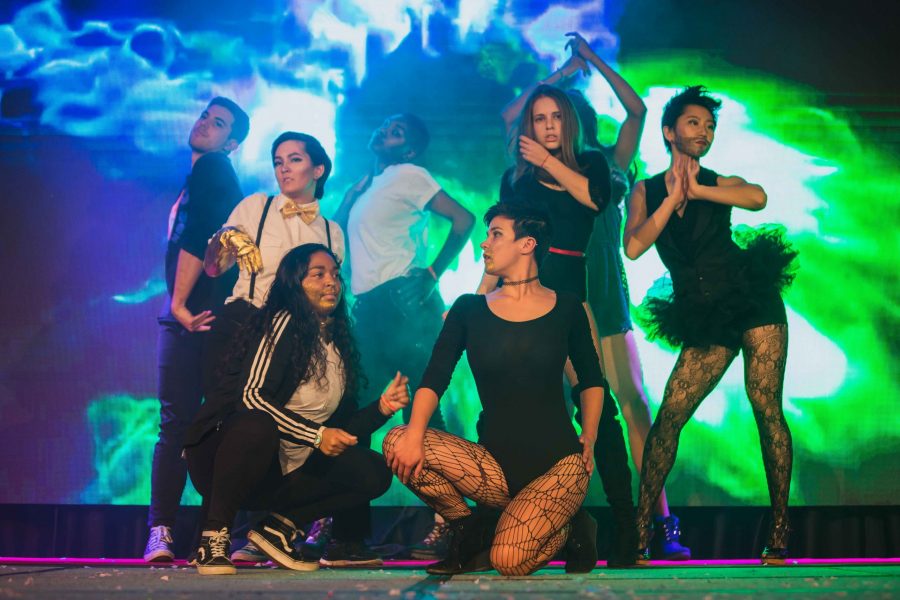 Nearly 30 student and professional performers from Colorado entertained a crowd of over 1,400 people for PRISM’s “Lights … Camera … Drag!” in the Lory Student Center Ballroom.

The show’s hosts, V Bellinger and Syd Sahota, encouraged audience members to throw money at the performers they favored to raise money for the Pride Resource Center. By the end of the show, $1,421.85 was collected.

Between performances, Bellinger and Sahota educated the audience on queer icons, such as Gilbert Baker, Marsha P. Johnson and Sylvia Rivera, and Kay Ulanday Barrett, who will be featured as a keynote speaker for PRC’s Pride Month Oct. 26 at 5 p.m. in the LSC Ballroom.

Alexandra Orahovats, a graduate student studying biomedical sciences, first performed in PRISM’s Galaxy Queers drag show during spring 2017 as a member of the CockRockin’ Rams of FoCo. Orahovats said she watched the drag show the two semesters prior to performing and became interested in joining.

In addition to student performers and local, professional performers, the drag show featured Gia Gunn, who appeared on the sixth season of “RuPaul’s Drag Race.”

Gunn thanked the crowd for continuing to support her and other drag performers.

“I never in a million years thought that I would be on such a platform doing what I love, changing the world by just being me and being visible,” Gunn said “And of course, if it wasn’t for all of you individuals who do support us, we wouldn’t be here, so I really do thank each and every single one of you But, before I end, I just want to say, sometimes in life we don’t always understand male, female, straight, gay, bi, transgender, whatever it may be … (but) what is important … is that we are ourselves.”

According to Delray Echohawk, the co-chair of the drag show, special guests like Gunn have seldom appeared in past PRISM drag shows.

“Spring 2016 was the first time in a long time that we had a special guest, and that was (when we had) four queens. Three of them were RuPaul queens and then last semester we had Shangela,” Echohawk said. “So, that was kind of the thing … maybe for folks who hadn’t been around awhile were thinking, ‘Maybe it will just be a spring thing,’ and now I want to make it (an) every semester thing.”

Echohawk, a senior psychology major, said he wants to continue having special guests for the drag show after he graduates.

“I think financially it’ll be feasible for us to continuously (have famous drag performers) from what I’m saying and from what I’m planning to do next semester as well,” Echohawk said. “I’m really excited about that, that’s the one thing I get to leave behind. At least one of my big improvements to the show (is bringing in these famous queens) and making it more of a consistent thing.”