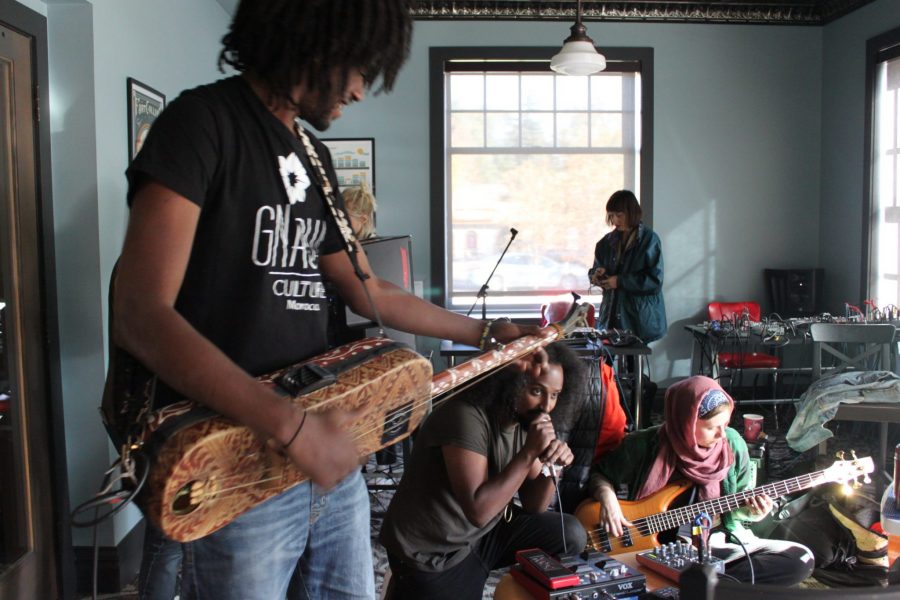 Four members of the band OneLabel are pictured while they rehearse one of their songs. in this rehearsal they play a song inspired by Kenyan tradition. (Brandon Mendoza | Collegian)

OneBeat started their week-long stretch Thursday night in Fort Collins with educational movie nights at The Music District and a kick-off show at The Magnolia Theater at The Lincoln Center. On Friday, OneBeat is running an open workshop at The Organ Recital Hall at Colorado State University, composing and performing an original film score to the renowned experimental film by Godfrey Reggio, “Koyaanisqatsi,” at The Armory followed by a late-night show at Downtown Artery.

On Saturday, OneBeat will host pop-up events around Linden Street from 11:00 a.m. to 3:00 p.m. and will close their tour with a final show at The Armory.

“We really like the idea of touring in a way that you really get to know the community that you’re in,” said Elena Moon Park, one of the artistic directors for Found Sound Nation, a nonprofit that designs and runs the OneBeat program. “Because we have this partnership with The Music District, we’re able to have almost a mini closing residency in this space and run a series of events this week.”

OneBeat is made up of 25 musicians, or fellows as they call themselves, from seventeen different countries. They play a wide variety of instruments from around the world. According to a press release, several northern Colorado musicians, bands and other artists will be joining the OneBeat fellows during their time in Fort Collins, including Loveland native Courtney Hartman.

According to Park, OneBeat aims to connect musicians from different cultures and backgrounds.

“One of the goals is to use music collaboration as a way for people from very different backgrounds, countries, musical styles, experiences to come together and to meet one another and create original music together,” Park said. “We believe that is a powerful way for human beings to get to know one another and therefore to be cross-cultural collaborations and understanding between nations.”

Park said the fellows strive to connect people and communities in ways that only music can accomplish.

“It’s a way to build a global network of what we like to call sonic change makers; musicians and artists who are really dedicated to using their music and their art to building strong communities and to bring people together,” Park said. “All of the fellows that we’ve invited to this program have displayed dedication to building community and strengthening society through their music.”

Park said the OneBeat application process is competitive, and the lineup changes every year.

“It’s a very competitive application, and it’s also a very tricky process because we are balancing a lot of things; places where people are from, musical experiences, musical styles, instrumentation,” Park said. “Every year we see a beautiful glimpse of what’s happening around the world.”

Of the thousands of applicants for the OneBeat program, drummer Sergey Balashov from Moscow, Russia, stood out and joined this year’s OneBeat team. Balashov said being a good musician is not the only qualification for becoming a fellow; being able to engage with the community is just as important.

“It’s not a lottery,” Balashov said. “It’s something you work for, and hopefully your work gets recognized. It’s not just about being an excellent musician. We do a lot of educational engagements with the communities and we do workshops for children, so they look for people who have had previous experience of having some social engagement aspects to music.”

According to a press release, the fellows spent weeks at the Caldera Arts Center in central Oregon to prepare for the tour. Balashov said it was an enlightening experience.

“We were completely away from distractions,” Balashov said. “It’s nature and 25 amazing musicians. It’s a beautiful and inspiring place.”

The schedule for OneBeat events in Fort Collins can be found on their website. The events are free with suggested donations to support the program and the musicians.