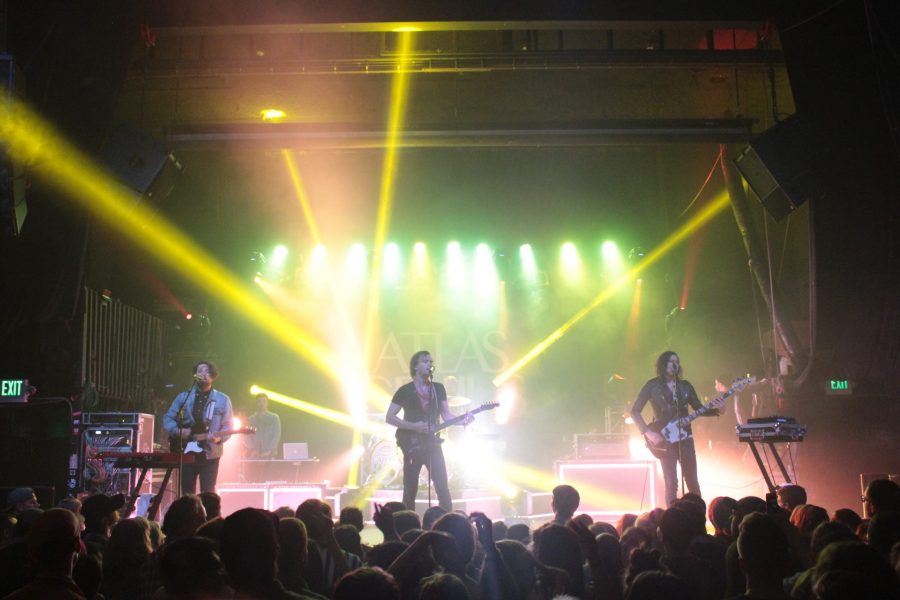 Atlas Genius, who hails from Southern Australia stopped at the Aggie Theater for their "63 Days of Love Tour." They were welcomed warmly as audience members had no problem singing and dancing along. (Sarah Ehrlich | Collegian)

Adelaide, Australia- based band Atlas Genius, consisting of brothers Michael and Keith Jeffery, turned the Aggie Theater into a laser show filled with alternative rock and a message of positivity.

Oct. 1 marked the ninth stop of Atlas Genius’ 63 Days of Love Tour. Included on the tour are bands Magic Giant, Flor and Half the Animal. Prior to coming at the Aggie, these bands performed in Aspen and Colorado Springs. Red Rocks Amphitheater is Atlas Genius’ next Colorado destination with legendary bands Incubus and Jimmy Eat World.

“With the 63 Days of Love tour, we want to show love and compassion and kindness,” said Atlas Genius front man Keith Jeffery. “There’s a lot of miscommunication and misunderstanding in society across the globe. I think we can all agree with that.”

Jeffery pulled an audience member onstage to share a “soul stare,” a gesture of respect and love that involves two people pressing their foreheads together and staring into each other’s eyes. This may sound silly to some, but the band stayed after the show to share a soul stare with a considerable number of fans.

Half the Animal started the night off with catchy, pop driven rock tunes that included their hit single “Babylon.” This band formed in 2016 and has since released an EP titled “Shapes” and a single called “bad bad Love.” Half the Animal brought the energy way up before welcoming the next guest, Flor.

Flor, hailing from Hood River, Oregon, brings indie rock to life with haunting melodies and a unique and powerful voice from lead vocalist Zach Grace. This band has recently released a ten-song album titled “come out. you’re hiding” with popular singles such as “guarded” and “hold on.” The connection between band members resonated with the audience, making the Aggie seem like even more of an intimate venue.

“I hadn’t even heard of these two opening bands, and now I think they are my favorites,” said McKenzie Wright, a senior psychology major who attended the show. “The sound was so unique, and the energy was unreal.”

Atlas Genius started their set off with “The City We Grow” and continued their dynamic set with “Trojans” and “If So,” their more popular tracks. This set seemed to lean toward the feel-good side of this band’s sound, a transition from their usual moody songs. The band included many tracks off their sophomore album, Inanimate Objects. Audience members also got the chance to hear an unreleased song called “Operate,” a heartfelt love ballad layered with heavy guitar and catchy synth sounds.

DeAnza Banuelos is a CSU junior theater major. He has only been a fan a short time but was blown away by the set nonetheless.

“I heard of Atlas Genius only three days ago and have been listening nonstop,” Banuelos said. “The atmosphere of Fort Collins is always great for concerts like this. Everyone was so excited, and it was nice to see the unity between the band and the people.”

The perfect cap off to the night was an upbeat rendition of “You Spin Me Round (Like a Record)” by Dead or Alive  and finally Atlas Genius’ newest single, “Molecules,” which has been in heavy rotation on the Sirius XM channel Alt Nation.

Lela Smith, another junior theater major has been an Atlas Genius fan for about three years.

“They have fantastic energy and the musicality is just wonderful,” Smith said. “You can tell that when they are having a good time, so is the audience. Since seeing them at Taste of Fort Collins a couple years ago, they have killed it every time I have seen them.”

It was refreshing to see a band create community through their sound and to do so with such ease. The audience’s ability to clap and dance along seemed effortless as their participation added even more vibrancy to the set list.