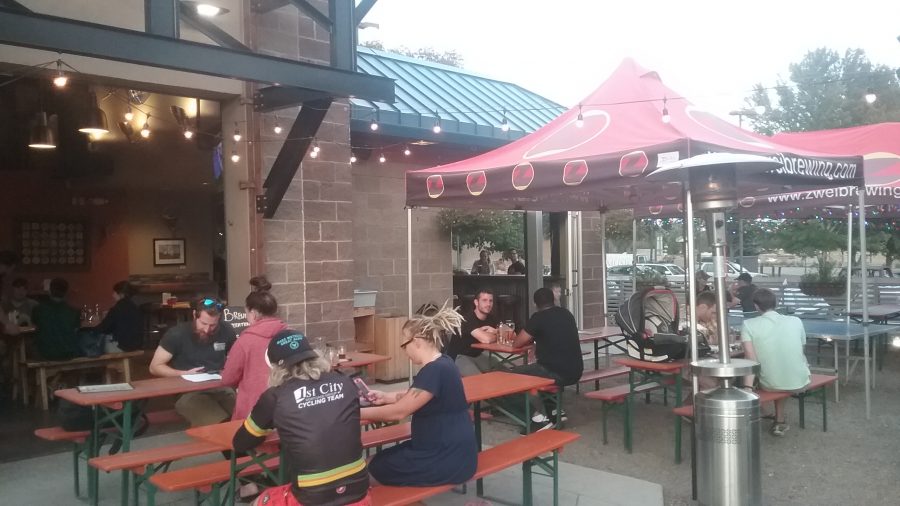 People enjoy the outside atmosphere at Zwei Brewery on Sept. 9, 2017. (Mack Beaulieu | Collegian)

Zwei Brewery’s name is not as noticeable as New Belgium or Odell’s, but it could be earning a place at the top of beer enthusiast’s lists.

Specializing in German beers, the brewery has a welcoming atmosphere and a diverse age range. It’s easy to see why Zwei has built a healthy following in the Fort Collins brew scene.

The beer definitely stands out at Zwei; particularly, the light German beers. Jason Joseph has been a regular since around the time Zwei opened three years ago.

“I appreciate good German beers, and it’s very tough to get them in most breweries in Colorado,” Joseph said. “They tend to serve ales.” Joseph quickly pointed out that his favorite beers are the Pils, the Helles and the Dunkel.

The Helles was mentioned as a favorite by multiple patrons, as well as beer-tender Brandon Kolinek. It’s a Golden Lager with a flavorful, citrusy bite. It’s well balanced between malt and hoppiness and would pair well with the wood fired pizza or German style sausages that are often available on the outside patio or parking lot.

While the light German beers seem to be the most popular here, the menu also features six beers that have over seven percent alcohol and four IPAs. The Willy Nelson IPA was mentioned as a favorite as well as The Beer Named “Sioux.” The beer list is diverse and welcoming, much like the atmosphere.

“In Fort Collins, breweries are so common that the beer has to be good,” Kolinek said. “When people come for the beer they get to experience the atmosphere. … We kind of keep the small town feeling of Fort Collins alive.”

While the beer is fantastic and good enough to be featured in multiple bars around town, the atmosphere is not a far second in reasons to come to Zwei Brewery. The atmosphere is light and relaxed with some German decor, but it is probably one of the more modern feeling German bars you will find.

The whole bar is very open with garage style doors that will let in a breeze from the patio. The patio features a regulation size ping pong table as well as giant Jenga and plenty of shade. Dogs are allowed as well, so you’re sure to see a few pettable pups.

As fun as the set-up is at Zwei, it has a mature atmosphere and caters to mostly experienced drinkers.

“I kind of appreciate not having a lot of new coming drinkers on the scene because that can be kind of intense,” said Teresa Olsen, who is a senior veterinary student at CSU.

This is another highlight of Zwei. The atmosphere shouldn’t be classified as conservative or old, but it definitely provides for people who want to get tipsy and have conversations rather than getting super trashed. It’s a great option for the junior or senior student who’s getting sick of intense, sweaty rooms.

On top of the great beer and atmosphere, Zwei is easily accessible with the Harmony Max station just a short walk away. It’s also very affordable at $5 for most pints and $6.50 for liters on “Mas Mondays.”

Zwei Brewery has a lot to offer for the mature college student or anyone who enjoys a diverse but laid back vibe.

Mack Beaulieu can be reached at entertainment@collegian.com or on Twitter @mack_enzie_james.