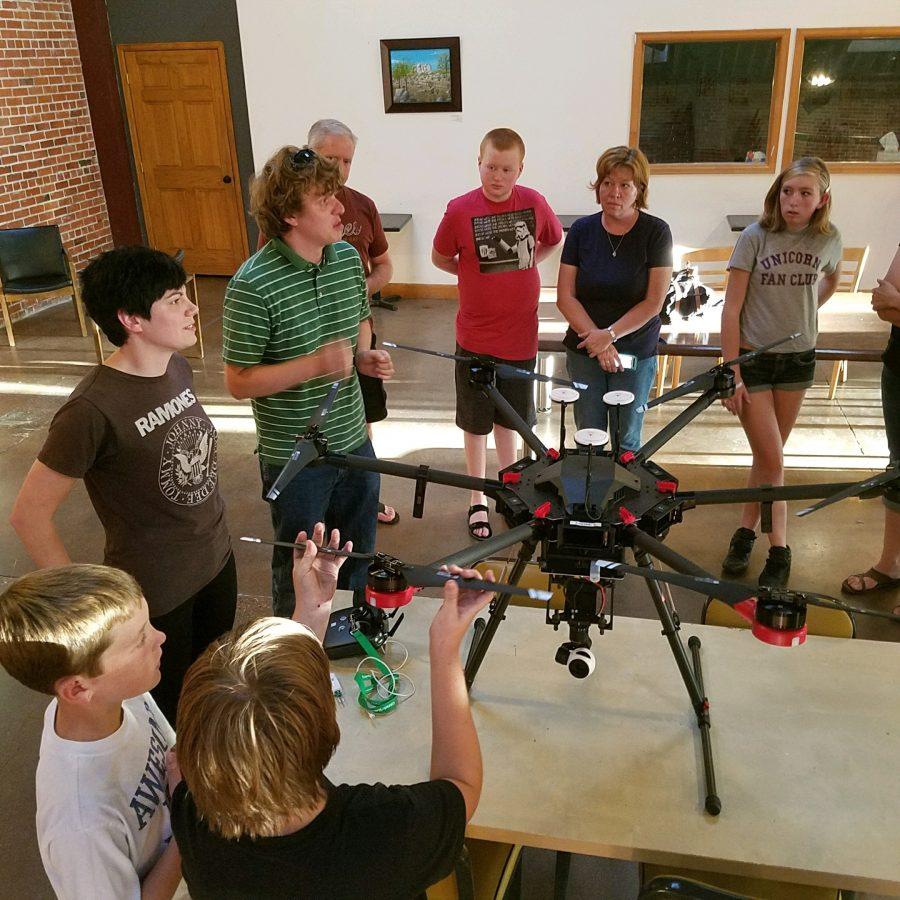 A group of starry-eyed students leans forward, focusing their gaze on footage of a severe storm taken by a drone.

“Almost all of the atmosphere we study is only about 16 kilometers high,” said Dr. Sue van den Heever, a professor in the Department of Atmospheric Science at CSU. “Where would we be if we traveled 16 kilometers south of Fort Collins?”

“China,” one of the students says, to a tumult of giggles from the audience.

The excitement in the room was palpable as approximately 15 middle and high schoolers learned the basics of severe weather. They were there as a part of Northern Colorado’s chapter of Teen Science Café, an extracurricular program that allows teens to explore scientific career options that may otherwise remain unknown.

These nationwide programs occur about once a month during the school year, giving students unfiltered access to local researchers and fields of study. Teen helpers decide upon the topics, introduce speakers and gain invaluable leadership experience in the process.

“Tonight, the people that are helping have been here for the last four years, and one of the students, Tony, is now a freshman studying biochemistry and microbiology at CSU,” said Melissa Burt, the organizer of the Northern Colorado chapter. “It’s cool just to see how they evolve over time.”

Heever gave September’s seminar, bringing with her a large drone and a couple of graduate students to explain the intricacies of manning it. She gave students permission to gently touch the drone and ask endless questions regarding tornadoes, hail and what to study if they wanted to delve deeper into the complexities of severe weather.

The group attempts to bring in speakers from a diverse range of fields. In 2016, they held seminars on wildfires, the food ancient humans ate, miniature robots and the psychology of nutrition labels.

Lessons are meant to be interactive and simple, geared explicitly towards young students. Heever used concrete examples in her severe weather talk, comparing the largest hail stone ever recorded to the size of a shoe, which prompted several gasps from the crowd.

Teresa Alexander, a parent of one of the students at the event, is a part of the Northern Colorado Homeschool Association, and brought her kids to this event to augment their education.

“It’s exciting information,” Alexander said. “It’s current…it’s things that are going on right now. I think sometimes kids are isolated in their games and their own world, so it’s kind of fun to get them out and help them connect with what’s going on in the world that’s real and also get them thinking about future jobs, future interests and options.”

Burt, a research scientist in the Department of Atmospheric Sciences and the education and diversity manager for the College of Engineering, created the Northern Colorado chapter and understands the importance of getting young people involved in science early.

“(I like) giving people opportunities to learn about other sciences that are out there because you really don’t learn about these things in (high) school,” Burt said. “You just have to come upon it and then you’re like, ‘oh wow that’s cool.’”

Teen Science Cafés are open to everyone and are meant to instill curiosity and awe in more than just teens. Burt encouraged anyone interested in giving a talk to contact her directly.

“If professors are interested, they can just send me an email and say they want to talk at TSC,” Burt said. “Grad students are completely welcome, and people outside of CSU are also great.”

Date : October 11
Time : 5-7 PM
Location : Everyday Joe’s Coffee House
Presenter : Dr. Mica Glantz from the CSU Department of Anthropology
Title : Neandertals are us! Learn why some of us carry more Neandertal genes than others