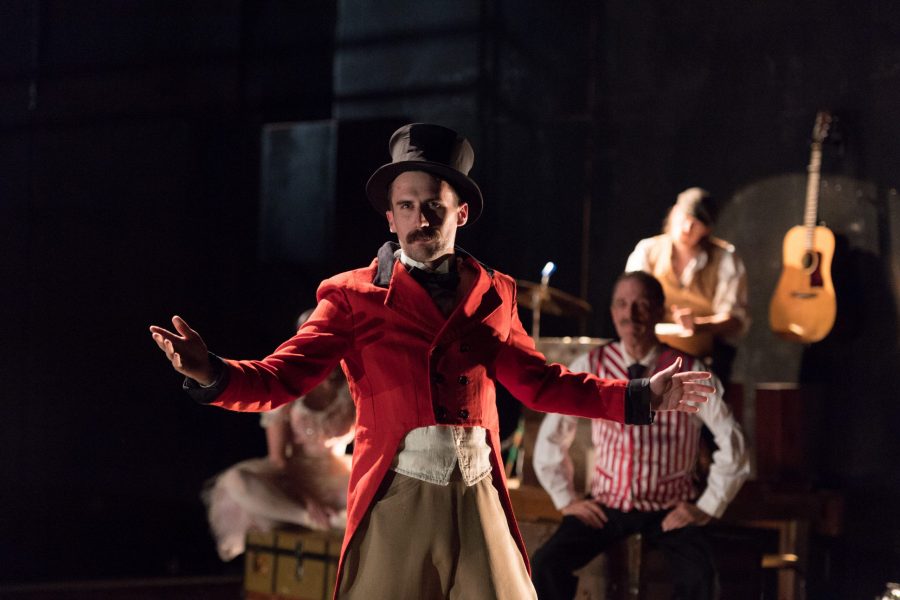 Bas Bleu Theatre Company’s production of “Elephant’s Graveyard” brings a historically famous story to the present-day. Although the story is set more than a hundred years ago, the Fort Collins-based theatre company presents it in a way that makes sense in today’s political and social climate.

The story is told in a collection of monologues with no one character being the lead. It follows the history of traveling circus in 1916, resulting in the death of an elephant.

“The beauty of the play is that it’s all storytelling, so the entire production unfolds in your own imagination,” said director Garrett Ayers.

“I’d say about half the people in important positions for the show are somehow affiliated with CSU,” said Roger Hanna, the play’s scenic and light designer.

The show strays from traditional plays because there is no action. The performance is conveyed through a series of monologues, and the character’s interactions with each other are limited.

“Each actor has to be very conscious of themselves within the play rather than conscious of the other people necessarily, which is odd because it’s also an ensemble piece,” said Liam Kelley, a senior english education major at CSU who plays the trainer in the play.

“Elephants Graveyard” has moments of silence paired with moments of quick moving plot. There

are light and silly parts matched up against dark ones.

“It’s a show of contrasts and paradoxes of sorts,” Kelly said. “Even the set up. The whole thing is in a present past. It’s being told as if it’s a past event, but it’s being lived as if it was a present event.”

Beyond the acting performances, the visuals for this play are different from what might be seen in a traditional play. There was not an intricately detailed set, and the theatre itself was used to enhance the show.

“We really embraced the space so there almost isn’t a set,” Hanna said. “There’s some railroad ties and 15 metric tons of dirt.”

The story highlights many social topics that are still applicable today.

“It’s a piece that is a conversation starter for sure and a piece that kind of causes you to rethink your own perceptions and the lens that you’re working from,” said costume designer Maile Speetjens.

The play deals with serious topics, but it is also funny.

“The humorous and enchanting script has a dark twist with largely involved metaphors for an-elephant-in-the-room about social justice issues and racial discrimination that are as relevant today as they were 100 years ago when this true story took place,” said Holly Wedgeworth, a sophomore at CSU majoring in theatre performance who plays Young Townsperson in the show.

The show communicates a variety of different messages while remaining inclusive.

“It did a really good job of conveying its message without shutting its audience down,” said Abby Jordan, a member of the play and senior at CSU majoring in theatrical design and technology.

Ayers said the play focuses on how everyone is in control of their one choices.

“We’re not powerless to make choices regarding humanity and our society and how we treat other people,” Ayers said.

“Elephant’s Graveyard” will be performed at Bas Bleu Theatre Company through October 10.

Go to tix5.centerstageticketing.com to purchase tickets.