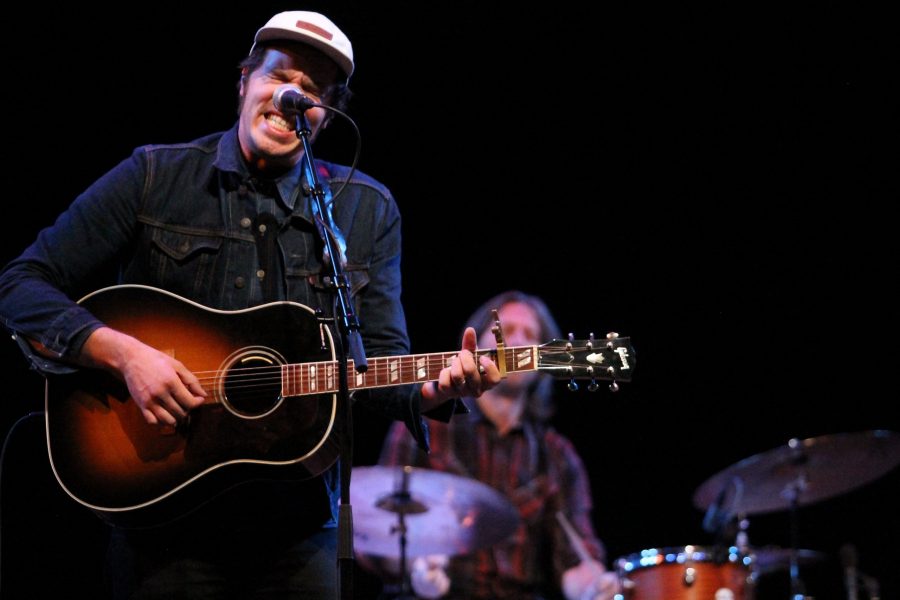 Josh Garrels on guitar and vocals at the Lincoln Center. Abby Currie | Collegian

When Christian folk musician  Josh Garrels introduced his song “Colors,” he said his music has a

visual feeling. He compared the phenomena to the condition where people see color with sound, also know at synesthesia.

Garrels performed for an audience at the Lincoln Center on Sept. 20 at 8 p.m. The audience started the concert in their assigned seats, but by the last song the crowd stood and swayed with the music.

According to Garrels’ official website biography, he has spent over a decade crafting music

“Resting in the space between accessibility and honesty, Garrels’ songs wrestle with and celebrate the mystery of faith with authenticity and heart,” the website said. “Cultivating a genre-blending mix of folk and hip hop, Garrels’ music explores themes of compassion, hope, longing and liberation.”

According to Loud Harp’s website, members Asher Seevinck (Seafinch) and Dave Wilton (A Boy & his Kite) joked about starting a band ever since they first met. In 2011, they actually followed through with their jokes.

“What was supposed to be a writing weekend for Asher’s band quickly turned into a time of spontaneous worship and prayer,” according to Loud Harp’s website.

Audience member Ashley Wharton said she was impressed by the show. Wharton looked up Loud Harp before the show.

“Loud Harp was really good,” Wharton said. “I had actually never heard of them.”

According to Wharton, Garrels sounded the same as he does on his albums.

“I mean, when an artist is really good it sounds really similar,” Wharton said. “It’s different because you get to feel how the artist actually feels about the song.”

Wharton said she also likes the folk and blues elements within Garrels’ music.

“I think it’s a really good mix of a bunch of different types,” Wharton said.

Jason Jones, another audience member, flew all the way from Flint, Michigan, with his girlfriend to see Garrels in concert. As Garrels started playing, Jones stepped away from his seat and danced by the edge of the stage. Jones said when he searched for upcoming Josh Garrels concerts, he discovered the Lincoln Center in Fort Collins. Jones said Garrels was a huge inspiration to him. He first saw Garrels perform in Michigan at Hope College.

“He performed that song, and I was just blown out to weeping and to tears,” Jones said.

Jones’ favorite song by Garrels is “At the Table.”

Jones said he asked his girlfriend to marry him during Garrels’ performance of the song “Ulysses” the night before, on Sept. 19, at Worship on the Rocks, a musical event hosted by Red Rocks.

“When I booked this flight and this trip, I was like, ‘this is going to be the perfect time to ask my girlfriend to marry me,” Jones said.

Everyone at the concert seemed moved by Garrels’ music, as they swayed and held their hands up in with the lyrics. The environment was exciting and full of love.