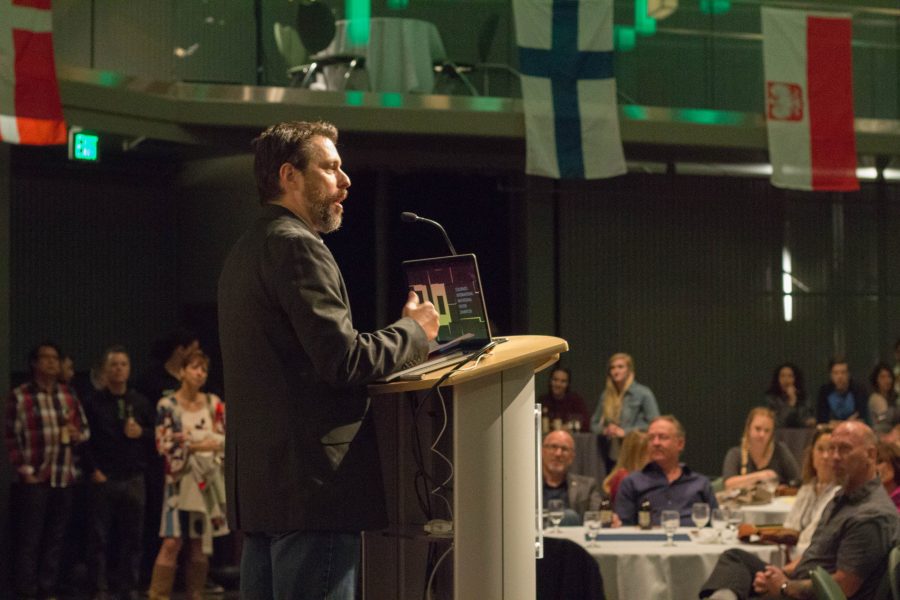 Jason Frazier addresses the crowd at the opening of the Colorado International Invitational Poster Exhibition. Frazier is the co-director of the event and a graphic design professor in the Department of Art and Art History. (Ashley Potts | Collegian)

The panel was held Sept. 21 from 5:30 p.m. to 6:30 p.m. at the Gregory Allicar Museum. Lindsey Nielsen, coordinator of the ACT human rights film festival, moderated the discussion.

According to the Gregory Allicar Museum of Art’s website, Drueding and Scorsone “are best known for their poster designs promoting social causes, including public health, environment protection, women’s rights, and free speech.”

“If we were writers, we’d be writing something, but we’re designers,” Scorsone said.

When designing a poster, Scorsone said they do a lot of research and attempt to be as specific as possible.

“We don’t want our answer to be generic,” Scorsone said.

According to Drueding, they don’t know what visual form a poster’s going to take when they start out. They can collage and mix elements to create juxtaposition of visuals that might be little more jarring to the viewer.

“There’s this kind of immediacy, the sense of the hand and the art,” Drueding said.

According to Anderson, the artists work with issues such as child brides and human trafficking. Anderson then addressed one of the posters, depicting a human as a key chain with a price tag.

“I was very appreciative of that poster because it avoided some of the really common pitfalls that you often see and visual anti-trafficking rhetoric,” Anderson said.

According to Anderson, if you google “human trafficking” pictures of young, white, and often attractive women will pop up.

Scorsone said they put thought into the poster.

“We didn’t want to depict any specific race or anything because we wanted it to be universal,” Scorsone said.

According to Drueding, they wanted to create a figure that society could identify with.

“And so, gesture was very important for us,” Drueding said. “It’s not so much the figure but the gesture that communicates the message.”

Drueding said artists have a tradition of pointing out what’s going on. It’s something that crosses through many art forms.

“Whether it’s design, fine art, music, literature – whatever,” Drueding said. “I think that we are a community that tries, that it’s our role to as communicators and as creative people to help everyone else see and understand the things that are going on around them.”

According to Anderson, when it comes to trafficking, many people notice that women are participating in the exchange.

“The idea being it can’t be sexist or misogynistic if women are participating,” Anderson said. “Maybe it is cultural. I think, knowing in every culture, women and men can be sexist and misogynist and all the other ists.”

According to Anderson, actionaries are gaining a lot of ground by being plain spoken right now.

“Take for example, female genital mutilation,” Anderson said. “So, they say ‘that’s a cultural practice.’ I’m sorry, no culture should be able to whack off sex organs, so you can’t have pleasure anymore.”

Canetto said in certain cultures, women have few possibilities to articulate their opinions.

According to Drueding, women have a long way to go in America.

“If I’d been born 10 years earlier, the culture would have accepted me maybe being a teacher, maybe being a nurse, and if I married and had children, I would stop,” Drueding said. “That was the norm, and people who went outside that, were considered really outliers and strange.”