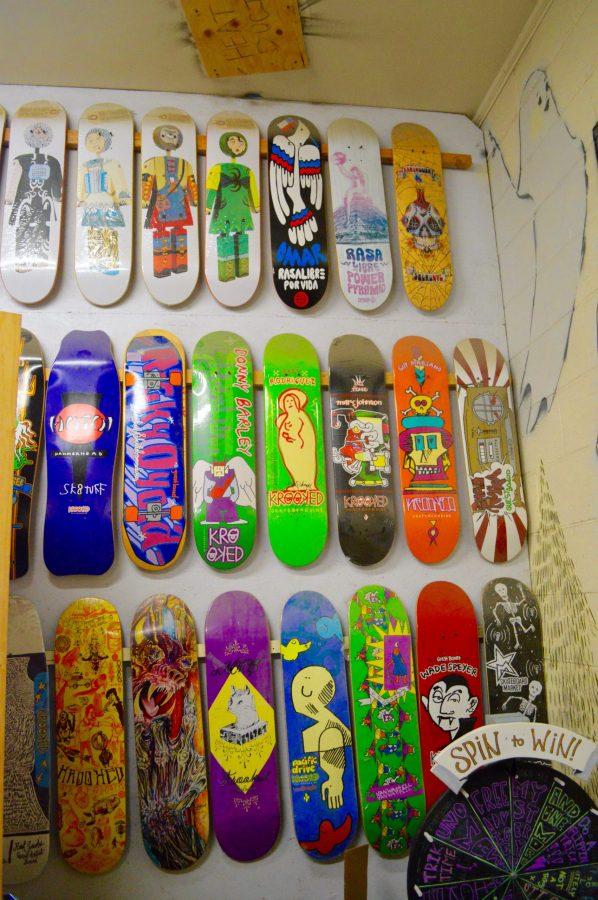 Fort Collins is home to five skate parks, and for many, these are sanctuaries of refuge where every drop in feels like home.

As skate culture continues to grow since its start in the 1950s, so does the demand for legal skating spaces. The various free locations around the town propagates a community of skaters who utilize the seemingly independent activity that breaks the bounds of team sports while simultaneously participating in physicality that brings people together.

Launch: Community Through Skateboarding aims to harness this idea and create a space to give back.

Affectionately known as Launch by those who go there, the group is a Fort Collins-based 501c3 non-profit organization with the mission to “empower youth to benefit themselves and their community through active physical engagement, participation in hands-on learning experiences, peer to peer connections and community service opportunities,” according to their website.

The establishment came to life six years ago when the Founder and Executive Director of Launch, Andy Weiss, decided to close the skate shop he owned for 15 years in the hopes of creating something that went beyond making money.

“I had an opportunity to open a skate store when I was 19 years old,” Weiss said. “Our strength as a store back then was that we were kind of providing a place for people to come hang out, and there was a lot of community around it. So, after doing that for so long, I selfishly wanted to get back to more of connecting with the community of skateboarders and relying less on just selling a product. As skateboarding has grown from a sub-culture that I grew up with, there is more people participating in it, and it is a point now where there is a population of people who really benefit from programs around skateboarding.”

Launch’s physical location resides at 1007 N. College Ave., and includes a lobby that holds one of the largest collections of skateboarding magazines in the country, a wood shop space for creating custom boards and the main attraction: one of Northern Colorado’s only indoor skateparks. For Weiss, it was pivotal to provide a space for kids to come after school and make connections with others who share their interest.

But, Launch is more than the physical skatepark. Due to budget, Launch originated with no physical location and predominately centered on off-site programs. Before he began Launch, Weiss worked for the city of Fort Collins Recreation doing skateboarding programing, including skateboarding lessons and camps. Launch began taking on similar functions such as summer camps and utilized co-op spaces for such programs. Today, the programs and events that the organization puts on, in the building and beyond, are part of what makes Launch extraordinary.

Nine-year-old Jack Carlson has been skating at Launch for two months, and participates in group lessons every Saturday morning.

New skaters like Carlson can sign up for private lessons or join group lessons on Saturday mornings. The organization also provides Build A Skateboard workshops and hosts themed skate nights and birthday parties. At the end of 2013, Launch was able to invest in a 15-passenger van that brings young skaters to outside skate parks for day trips around Northern Colorado. Launch also hosts competitions, and is soon hosting an annual Halloween skate competition at Northside Aztlan Skatepark on Saturday, Oct. 28. The event is free, and all participants must be in costume to compete.

The organization applies for many grants and sells merchandise such as T-shirts and hats with the Launch logo, but Launch largely operates on public support to keep it thriving. Launch recently had a fundraiser at New Belgium Brewery called All Hands on Deck. The art show was made possible by 60 artists donating their time to paint skateboards that Launch sold at the brewery.

“Our focus is definitely on adolescents, and I think by default, that is who is getting involved in skateboarding,” Weiss said. “But in our recent fundraiser, you know, no kids were really involved in it, yet there are all these people that are my age that value what skateboarding gave them especially in their younger years. That is one of the reasons I think launch can exist, because there are people with kids of their own now that really see the benefit of it.”

Weiss said that most of Launch’s programs are concentrated on working with an at-risk population. Because skateboarding is engaging to a population of people who are not necessarily team sports people that are attracted to the independence and no-rules aspect of the sport, accessibility is a high prioritization for Launch. Skateboarding has personally gotten Weiss through heavy times in his life the way sports like football can do for others.

“What I think is really is cool is that Launch fosters an intersectional space to be used. There are over 30’s nights, there are ladies’ nights, there are 13 and under sessions and beginner sessions,” Bishop said. “And you know, what that does is create a space to be used by everyone to make skateboarding an accessible thing to them, which is super beneficial to everyone who is involved in it.”

Weiss said he would love to see more CSU students get involved with Launch in the future.

For those who do not own their own equipment, Launch provides quality skateboards and helmets to rent for a low price. Skating at the Launch location is only one dollar an hour, a reasonable fee for an indoor park. The organization is primarily volunteer driven, but there are plans in the process of expanding hours during the winter with an addition of a new part-time position so that Launch can continue to foster an accessible community of growth and empowerment all year round.