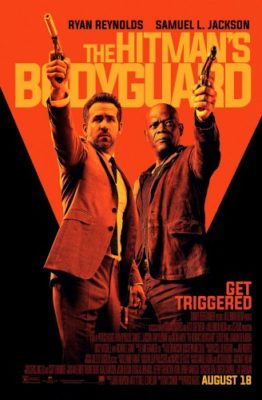 “Boring is always best,” proclaims Michael Bryce, played by Ryan Reynolds, a bodyguard, who is obsessed with planning and precision and being a triple-A agent. And while certainly not boring, the film adheres to a litany of tropes common to the action-adventure genre. Buddy adventure? Yup, with a twist. Love interests. Big time. And of course a mélange of swarthy Eastern European villains.

The movie opens with Bryce serving as a bodyguard to Kurosawa, a Japanese arms dealer. However, the powerful magnate is shot in the head, and Bryce’s life takes a significantly downward spiral.  When we see Bryce two years later he is guarding pathetic, drug-addled corporate executives—a job he still manages to perform with a Bond-ian swiftness. However, Bryce’s life is about to change.

The bloodthirsty dictator of Belarus, Vladislav Dukhovich, played wonderfully by Gary Oldman, is being put on trial for crimes against his own people. In one chilling scene, Dukhovich and his thugs ransack a dissident professor’s home and shoot his family. “There is nothing better than a good education,” he growls in the aftermath of this bloodbath. Another killer of sorts, the hitman Darius Kincaid, played by Samuel L. Jackson, agrees to testify against the dictator at the Hague, in exchange for wife Sonia’s release from prison.

Thrown by circumstances into protecting Kincaid—who is being actively pursued by Dukhovich’s minions—Bryce and Kincaid embark on an adventure from England to the Hague. The twist: Kincaid has nearly assassinated Bryce 28 times. This dynamic holds immense potential. It is a chance to subvert the traditional action comedy/buddy film. Of course, all too soon the movie retreats into lazy shibboleths. It is a shame, given Jackson’s propensity for playing memorable hitmen.

The most clichéd aspect of the movie is Kincaid transforming from Bryce’s enemy into a staunch ally. This is to be expected. However, the transformation is a little too neatly packaged, too clean. To make it worse, Kincaid also becomes the voice of sage wisdom, especially where love is concerned.  He is the vehicle by which the bitter and cynical Bryce is transformed, especially in the love arena. Both Bryce and Kincaid have love interests, and the movie focuses a great deal on their desire to redeem themselves. Obviously, without Kincaid, Bryce would be perpetually cynical and bitter. Why not let us have that scenario?

Tropes aside, the movie does have its good points. Through Kincaid, and a well-placed flashback, the movie questions how we view killing and morality on a black and white level. The juxtaposition of the brutal Dukhovich and the far-more complicated hitman Kincaid offer real possibilities to delve into the nuances. But, the movie does not explore its full potential. In particular, it could have benefited from developing Kincaid’s character further. When we learn how Kincaid became a hitman, we feel a certain empathy for him, and having that empathy early on is key. I would have loved to know even more about his past victims, to understand Kincaid better.

The two men are also a study in hilarious contrasts. Kincaid is out to skirt the rules, trying to escape and do things his own way. Bryce insists on sticking to the book throughout, a point that Kincaid raises in one of his teaching moments.

Should you see this film? If there is nothing else out there except reboots and bad sequels.

“When life gives you shit,” Kincaid proclaims. “You make Kool-Aid.” One must go with the flow, instead of being obsessed with  predictability, a lesson the filmmakers could have taken from Kincaid.