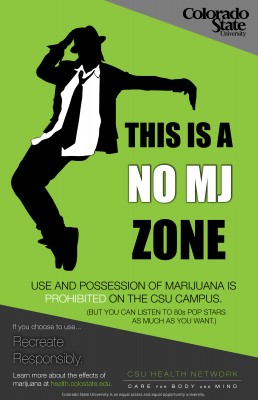 What to know about smoking marijuana in Colorado:

Must be 21 years old to consume recreational marijuana

Marijuana can’t be consumed in public

It’s a new semester, and there are thousands of new students. Some of these students chose Colorado State to be their new college home due to various programs or the new stadium, and others just want to smoke some pot, man.

Although, here in Colorado, we are a legal state for both medical and recreational weed, CSU (and other schools in Colorado) prohibits marijuana on campus. A real bummer, but a fairly understandable one. That conversation isn’t for today though. The conversation for the day is, with marijuana prohibited on campus, how are students going to get toasty?

The number one concern here is legality, of course. A majority of freshman aren’t 21 yet, so they can’t even obtain or possess marijuana. However, there are more transfer students who are 21-years-old, and some freshman can possess their medical marijuana license, which can be obtained at 18, or younger with unusual circumstances. Remember, you have to be legal to smoke marijuana.

For those who are legal to smoke marijuana, how can they do it safely? Well for starters, they can smoke in the comfort of their own home, if the property owner allows it. There are hardly any freshmen who have this choice though. For them, it’s best to make friends with those who are older and live off campus, and travel there to smoke if they are of legal age or have a medial license. Remember, it’s illegal to smoke marijuana in public, but your yard counts as an extension of your own home in most cities.