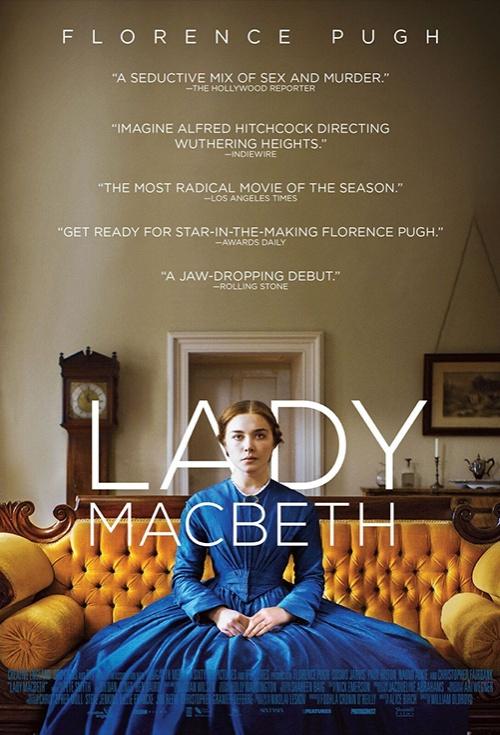 Fun fact: According to IMDB, there are only three musical passages in the entire film score.

“Life is brutish, nasty and short,” Thomas Hobbes once proclaimed. That dictum perfectly describes “Lady MacBeth,” a British film adapted from Nikolai Leskov’s 1865 novel “Lady MacBeth of the Mtensk District.” Set in 19th century England, it is a movie about oppression, plots and betrayal, themes which have been far better explored in other period movies. Suffice it to say, I was less than thrilled.

The movie opens with our protagonist, Katherine (Florence Pugh), on her wedding day. She is being wed to a cold aristocrat, Alexander Lester (Paul Hilton), who lives with his equally tyrannical father (Christopher Fairbank) on a cold and dreary estate astride the moors, which serve as their own character within the narrative. There is no joy whatsoever in the act, and the opening scene reveals a woman merely going through the rituals dictated by the patriarchal powers that be. This sets the stage for the action to come.

Katherine’s helplessness is highlighted in multiple ways, and this is one of the film’s few strengths. This is specifically highlighted by her husband’s efforts to discourage her from seeking fresh air, which is a recurring theme. Fresh air represents the prospect of freedom and of free-thinking. Instead, the prescribed solution is for Katherine to hole up, submitting to her husband’s whims and immersing herself in the safety and rigidity of prayer.

The oppression is further symbolized by other small scenes that reveal the repetitiveness and rigidity of Katherine’s home life. In multiple scenes, we see her struggling to fit into a corset, a symbol of the expectations foisted upon her, and the home in which she is mere chattel. In others, Katherine is simply sitting on the sofa, staring blankly into an unseen foreground. These devices are well-done, but the movie ultimately becomes stuck relying upon them instead of using the devices to develop story and help us understand these characters.

When her husband leaves for an extended period, Katherine seeks out solace in carnal pleasures with Sebastian, a servant (Cosmo Jarvis). And, this is where the film becomes particularly problematic. The movie makes little effort to flesh out any sort of coherent dynamic between the two protagonists, and the affair seem to come out of nowhere. Given Sebastian’s rough and rapacious behavior in several scenes, Katherine’s willingness to engage in the affair seems less than credible. Yet, they engage in constant and rough acts of sexual commerce, which reveal little more than the brutish world to which they are accustomed.

Alexander discovers that certain things are rotten in the state of Denmark, and the plot takes brutal and dark turns, which I will not reveal, but are commensurate with a movie that references Shakespeare. I came away from my viewing unable to truly empathize with the characters, aside from Katherine to some extent, or to understand them, and therein lies the crux of the matter.

The movie does not attempt to truly develop characters in general. Characters fit certain boxes with few shades of gray. This is particularly true of Katherine’s tyrannical husband, replete with a spruce set of villainous whiskers and who speaks in harsh clichés. He is a sort of clown-like villainous figure in his own way. I almost expected him to tie someone to a railroad track, to be honest. Likewise, with his over-the-top and tyrannical father. When the father meets his own particular fate, not a tear was shed.

Would I recommend this movie? Absolutely not.

I’m a fan of period movies, especially ones with plots and conspiracies. When done well, they can genuinely illuminate the human condition and the foibles of our pasts, but this one brings nothing new to the table. Cliches abound.